Best Tasting Cookies that are as big as your face!

In May, my friend Erin and I traveled to New York City for Book Con. We stayed on the Upper West Side near Central Park. Our morning routine was going to a bakery for a coffee and pastry, then spending the day at the Jatvis Center. Little did I know I would end up trying one of the best tasting cookies that were almost as big as my face! (Okay, not really, it just felt that way).

On our last day, I woke up super early and ventured out on my own. Out of habit, I headed to the same cute French bakery we had hit up the day before. It was closed. However, had it been open, I wouldn’t have discovered amazing cookies.

Where were these amazing cookies? A gem of a bakery called Levain. I made my way in and ogled all the delicious carbs that I’d forsaken the past year and a half (that’s a blog post for another time).

Finally, after standing there for about ten minutes trying to decide what to get, I asked the girl behind the glass, “What would you suggest?”

She automatically suggested the chocolate chip walnut cookie. I bought one, and a few other bready type good things I can’t recall. Reason why I can’t recall? That cookie was FABULOUS! Furthermore, I had no clue that this bakery was ultra-famous!

I looked up the bakery to find out that Oprah says her favorite cookies are from Levain. Taylor Swift, Ellie Kemper among others have mentioned them. People have waited in lines around the block for the baked goods. I’d luckily gone quite early and it wasn’t crowded. However, I could sense more people heading that way as I left. I had no clue as to the following this bakery had—regardless, I took a photo of the place. I sensed there was something special about it. 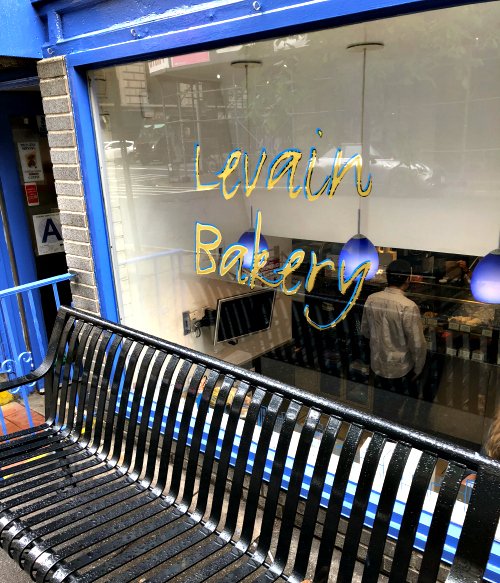 It wasn’t until a few months later, on Instagram, someone posted about these famous cookies. The blog Modern Honey had her take on the Levain Bakery cookies that she worked on and perfected. When I found the recipe, I had to try it.

I had no idea how many people have attempted baking these cookies. So many recipes are listed when you google search them. However, I followed this recipe in particular. I found it to be effective, simple, and the most delicious cookies I’ve ever made.

There were a few things that happened when I tried them. Here’s my experience. 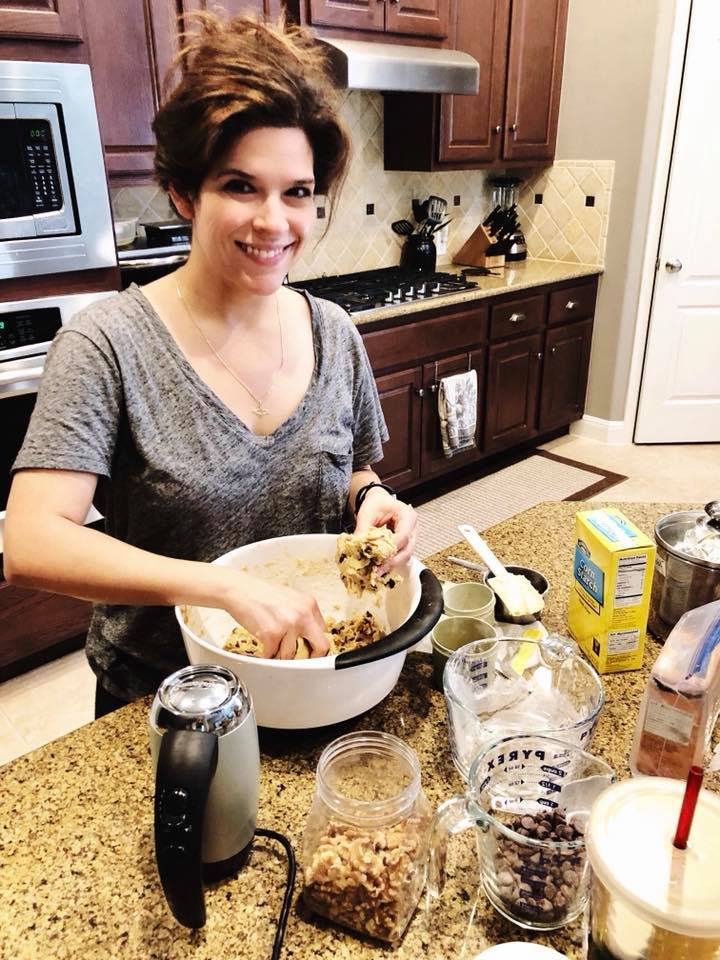 I am meticulous when it comes to baking from a recipe. I keep to it as closely as possible. However, there were some slight changes I had to make due to lack of certain items. For this recipe, I made sure the butter and eggs were cold. I chopped the butter up into small pieces, but the recipe didn’t specify whether or not to use salted or unsalted butter. After much scrolling through comments, I found the blogger had said that if you use salted butter (which I did), then cut down the amount of salt in the dough by ¼ a teaspoon. Meaning, use only ½ teaspoon. It took me a while to research that.

I did use a handheld mixer for the first part of the recipe – the butter, eggs, sugar, etc. For the flour, corn starch, chocolate chips, etc, I used my own hands. I found it more effective than the handheld. Don’t worry, my hands were clean. 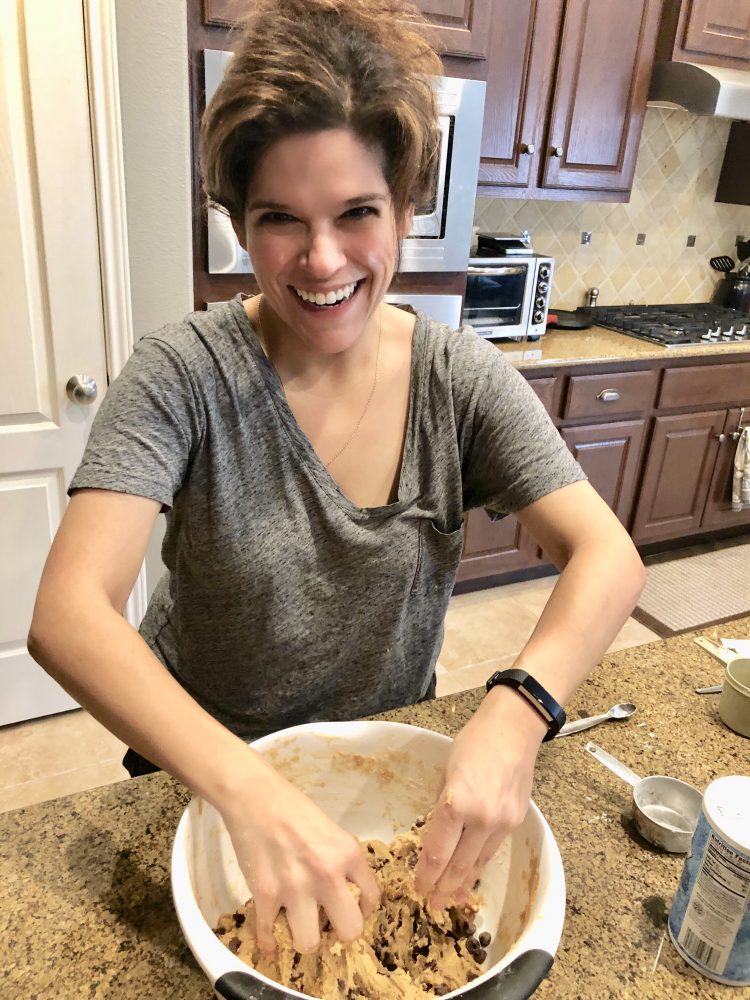 I also mixed it up and made some cookies with pecans and walnuts, cuz, why the heck not? They were both delicious.

I don’t own silicone sheets for the cookie sheets, nor did I have parchment or wax paper. After scrolling through the comments again, I figured out what to do. Someone suggested to put the cookie sheets in the freezer, then spray cooking oil on them before placing the cookie dough on the sheet, so I did that. The purpose of that was to stop the cookies from spreading out too much. I weighed the dough out on a scale to exactly 6 ounces.

The four cookies I made did spread out a little bit. The bottom and edges did get crispy and the middle was soft but thoroughly cooked, and oh, so good. The first batch came out looking a little like burger patties. I didn’t chill the dough very long before baking them with that first batch, but it didn’t matter. The cookies tasted amazing.

Give the cookies about ten to fifteen minutes to settle after they’ve come out of the oven. I know it’s tempting to try them instantly, but Modern Honey Blog suggests giving them some set-up time. It’s worth the wait.

I only baked one set of four the first time and then waited at least four or more hours before making the rest. The next time, I did have parchment paper, and the dough had been chilled a while.

Although it was harder to put the dough together, I still weighed out 6 ounces. Chilling the dough that long kept it from spreading out on the pan as much. However, there was barely a difference in taste. I don’t know if I’d say it was better to chill the dough beforehand. That’s more of a preference. It was difficult to get the dough together to weigh and put on the cookie sheet when the dough was chilled for a long length of time. The texture of the cookie was a little different though, and they didn’t look as burger patty-like as the first batch did. I also baked some smaller sized cookies after my four year old nephew requested that the cookies were “too big,” and couldn’t “Auntie Nissa make smaller cookies next time?” 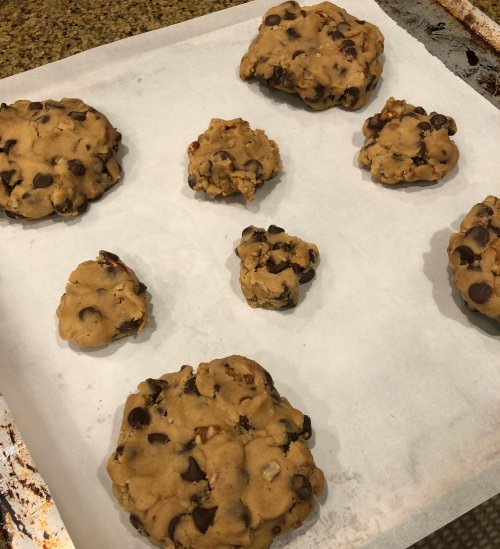 Keep in mind that I’m in Texas, and altitude might cause changes in recipe. For more info on this recipe, go to Modern Honey.

Disclosure – This recipe was posted on Modern Honey . For more info follow the link. I was not compensated for this post. The opinions, photos, video, and experiences are that of the contributor of Life, Books & Loves.

🚨 SALE ALERT 🚨 The highly anticipated THE

Happy Mother’s Day to all the different moms out