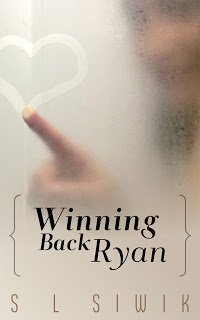 Blurb:
After a horrible day at work, I came home to find my boyfriend…in a curious position. After determining why he was unhappy, I, Anne Watson, decided to try and fix our broken relationship. My four closest male friends, however, had another idea. Revenge.
**Content Warning: This book contains a sexual assault scene and mature material. **
REVIEW by Monique
Honestly, I
did not know what to expect. The summary of novel, Winning Back Ryan, left a lot to the imagination. So when I began
reading, I found myself engulf in the story and discovered why the name of the
novel is, Winning Back Ryan.
Anne Watson met
her boyfriend, Ryan, in college along with her best friends of five years
Brian, Ben, Max, and George. She has decided to take the next step in her
relationship with Ryan and move in with him, since they had been dating for the
past two years.
Anne comes
home one day after work to discover her boyfriend, Ryan, cheating on her with
another woman in her bedroom. Devastated, she seeks her friends to comfort her
while she contemplates what she is going to do about her relationship with Ryan.
Her friends confess to her what they have known all along about Ryan’s cheating
and she decides she is going to try to revamp herself to get Ryan back, but not
without a little revenge.
While
executing her plan, she finds her plans take a few turn because some of her
friends have found a possible new opportunity to become more than friends with
Anne. She finds herself the center as a love interest and the testosterone
levels start to rise, but each of the guys have very different personalities
that are irresistible finding yourself unable to choose too.
Does Anne
win Ryan back? Does she want Ryan back after her revenge? Or does Anne find
herself with a new love interest?
S.L. Siwik’s
romance novel, Winning Back Ryan, is
her first novel in the Winning Back series and is a wonderful love story with
much relief does not end with huge cliffhanger. S.L. Siwik will not have us to
waiting too long to find out more about the lives of all the characters in the next
novel, Getting Back Annie, because
she is currently writing the second book in the series and provides a prologue
for the sequel.
S.L. Siwik’s
first novel in the Winning Back series, Winning
Back Ryan, receives 4 WONDERFUL STARS!

She loves going to diners on the weekendor inspiration, drinks a pot of coffee a day, and loves finding new music to add to her playlist.  Author to Just Good Friends and Winning Back Ryan.
Getting Back Annie, Office Perks, and Sirens and Sweethearts are soon to be released.