I had seen this on the news last night and wondered how the HELL does anyone have 150 dogs and let them live like this!! I have 3 and have my hands full!! I wanted to share the info below because we “adopted” Zoey and Jax from AHS, so this has a little emotional tug to it! I know there is so much going on right now but if you can please click on the donate button below and make a donation to help 150+ dogs in need! Thanks ~ The Rheinlander’s

More than 150 Dogs Rescued from Animal Hoarders: MyFoxAUSTIN.com
I received this email from AHS and wanted to share it with all of you…

Over the past few days, AHS has worked collaboratively with Bastrop County Animal Control to rescue nearly 150 severely neglected dogs from one Bastrop County home. The owners voluntarily agreed to surrender the dogs on Friday after stating they were ‘overwhelmed by the number of dogs on the property’.
Upon entering the home Bastrop County Animal Control Officers were greeted by a sea of eyes and an overwhelming aroma of feces and urine. The dogs were living in squalor and were forced to navigate mounds of trash and feces that stood several feet tall throughout the home. None of the dogs were vaccinated, spayed/neutered or had received proper vet care, and as a result, many are suffering from a variety of medical conditions, including skin conditions, malnourishment, open sores, weeping eyes and severely matted fur. 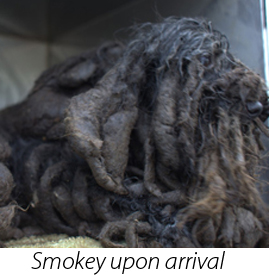 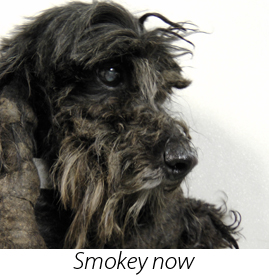 Smokey is just one of the 150 examples of the horrible effects of the neglect and deplorable living conditions these dogs were forced to live in. Rescuers almost overlooked poor Smokey thinking that he was a pile of scrapped carpet and feces, until he began moving and they realized he was actually a dog. Sweet Smokey, whose body weighs only 11 lbs, was covered in a crippling additional 10 lbs of dreadlocks filled with dirt and feces. After tedious grooming by AHS staff, Smokey is much happier , but he still needs sedation grooming by a vet in order to remove the mats that his skin has begun to grow over. Before grooming Smokey, our best guess was the he was some type of terrier mix, but after spending an hour and a half removing his horrific dreadlock “shell”, we realized he is actually an adorable Cocker Spaniel.

No animal should ever be victim of the kind of inhumane treatment these dogs have faced, and we need your help to give their story a happy ending. Bringing these neglected dogs into our shelter has doubled our normal animal population and placed a huge financial burden on our shelter. Please donate in whatever way that you can today to help us save their lives. We are in need of monetary donations, as well as medium, large and extra-large wire dog crates, medium and large animal carriers, and towels of all sizes. These items can be dropped off between 7am and 7pm at the shelter (124 W. Anderson Lane), and monetary donations can be made online at any time.

Disclosure:This is NOT a sponsored post I just wanted to share the info about AHS needing donations at this time!!  I was not compensated to write a positive or favorable review/post. This is Keeping Up With The Rheinlander’s personal opinion.
Kindle