With Disney’s “The Muppets” out in theaters TODAY!!!!, Statler and Waldorf offer unsolicited advice and a whole lot of laughs about what to watch for at the theater. 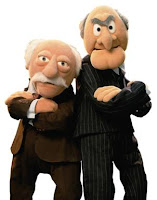 STATLER: When going to see a movie starring the Muppets, always get a good seat…
WALDORF: …one that doesn’t face the screen!

WALDORF: If you arrive late for your movie, stick around…
STATLER: …they’ll be releasing a sequel soon!

STATLER: Never get a bucket of popcorn that’s larger than your car.

WALDORF: Don’t talk on your cell phone during the movie….
STATLER: …it might wake us up!

WALDORF: If you have to explain everything in the movie to the person you’re sitting next to…
STATLER: …welcome to my world.

WALDORF: Sometimes the movie is not out of focus—you are.

STATLER: Don’t talk back to the movie…
WALDORF: …that’s our job!

WALDORF: If you don’t have anything nice to say about a movie…
STATLER: …sit next to us!

STATLER: Spoiler Alert—The Muppets are in Disney’s “The Muppets.”
WALDORF: Don’t say you haven’t been warned.

Disney’s “The Muppets” is directed by James Bobin, who co-created HBO’s “Flight of the Conchords,” which he wrote, directed and exec produced.

Kermit received a star on The Hollywood Walk of Fame in 2002. His song “The Rainbow Connection” was nominated for an Academy Award®.

Bret McKenzie, who created, co-wrote, executive produced and starred in the hit HBO television series “Flight of the Conchords,” is the music supervisor for Disney’s “The Muppets,” as well as the writer/producer of three original songs, which include big Muppet-style opening and closing numbers.

When Walter, the world’s biggest Muppet fan, his brother Gary (Jason Segel) and Gary’s girlfriend Mary (Amy Adams) discover the nefarious plan of oilman Tex Richman (Chris Cooper) to raze the Muppet Theater, they help Kermit reunite the Muppets to stage a telethon and raise the $10 million needed to save the theater. 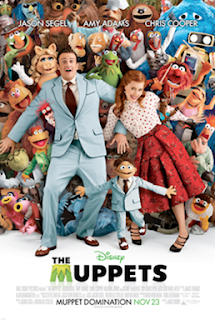 Disclosure: This is NOT a sponsored post! We love the Muppets and wanted to share this with our readers. This is Keeping Up With The Rheinlander’s personal opinion.

email
msrheinlander@gmail.com
follow me
← Which Muppet are YOU?? #MuppetDomination Thursdays Friends Cafe #BlogHop {11/24} →