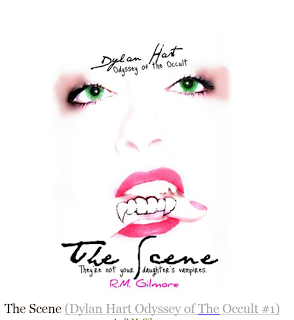 Irreverent twenty-something, Dylan Hart, has her little black heart set to cash-in on the blood-drained bodies of seven prostitutes scattered throughout southern California.
In search of the culprit of the media-dubbed Vampire Massacres, journalist Dylan Hart dives head first into L.A.’s sanguinary ‘vampire’ subculture, in an attempt to write her first best-selling novel and pay off her ever growing student debt.
Dylan drinks whiskey, smokes like a chimney, and possesses a mouth she wouldn’t kiss her mama with and with the aid of her statuesque hetero-life-mate Tatum Price, Dylan takes the case head-on, slicing her way through the absurd, the ethereal and the deadly serious, of the underground ‘vampire’ community. But lies and skepticism keep Dylan from the facts hidden within fiction and the danger lurking right under her nose. It’s all shits and giggles until a dead body pops up at your back door.
Review by Monique:
The Scene was most definitely very different kind
of vampire genre from what I am accustomed to reading, but once I began I could
not put it down I found myself captivated by the characters and the mystery to
solve.
Dylan Hart
is a 25 years old voluptuous young lady whom dresses like the First Lady,
because political officials did not give exclusive interviews to slutty young
reporters. Dylan is trying to do some local research and trying to write a book
about the resent Vampire Massacres in the Las Angles area. Dylan has also been
receiving insider tips from aide of Detective Michael Petersen is 6’3 ft. tall,
with aquamarine eyes, a bulky build like football player, and brown hair. But
the tips from Detective Petersen are not enough for Dylan so she enlists the
help of her best friend, Tatum Price, her best friend for the past 21 years, to
help uncover some of the mysteries especially since she is a tabloid
journalist.
While Dylan
is embarking to discover the  massacres,
she meet Cyrus Atossa aka ‘Cyrus-Mr-Man-Panties’ might as well be a damn Greek god!
His hair is brown, he has a natural tan, tall, pouty mouth, chiseled muscular
built, long eye lashes, olive green eyes, and the man is an underwear model! Detective
Petersen and Cyrus will drive you so insane, because like Dylan you will not know
to kiss them or slap them with the damn book!
Dylan
involving Tatum in her odyssey to help her solve the mystery, they embark in
the assistance of others too for answers they may already know without
realizing it. The Scene is not only funny, action pack, vampire, and MYSTERY that will capture your
attention immediately and will be unable to put the novel down because it captivates
you immediately capturing your interest to turn each page to discover more
answers alongside Dylan. The Scene is
R.M. Gilmore’s first novel in the trilogy, in the Dylan Hart Odyssey of The
Occult series and the second novel in the series is, Endless Night. In Endless
Night Dylan Hart is back but in New Orleans entangled again with the
underground.
I rate R.M.
Gilmore’s first novel in the trilogy, in the Dylan Hart Odyssey of The Occult
series, The Scene – 4 BLOODY STARS!
Amazon
R.M. Gilmore is a paranormal and mystery/suspense writer and creator of the irreverent Dylan Hart Odyssey of the Occult series and the groundbreaking Lynnie Russell Trilogy. Both of which were voted top reads of 2012, as well as, bestselling in Irish Mythology, Female Sleuths and Occult genre. A member of Sisters in Crime and devoted Indie author supporter, R.M. uses her time when she is not writing to promote and assist her fellow authors.

R.M. resides in California with her family and a ton of pets. Choosing to behave ‘outside the box’ R.M. prefers to think and live freely without the constraints of social stigma in life and in writing. That being said, she truly is not your mother’s author.