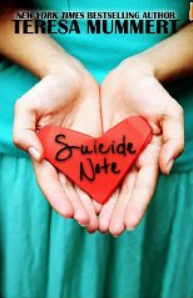 Suicide Note was such an AMAZING read. I loved loved loved it. It starts with Shane who is stationed over seas. He is such an amazing and strong character in this book. The character is very well written. He finds out that his fiancé has left him and married someone else through a letter. He is headed back for a small leave and decides to stay with family in Maine. He meets Jenn who works for his cousin. Jenn is dealing with heartache of her own. She was also engaged but her fiancé has cheated on her with her own sister. They are now getting married and Jenn has to be in the wedding. She feels like her sister is better then her and she is not in the career she wants to be in her life is one big failure. She feels her life is going no where. Shane and Jenn cross paths and their story begins. Shane believes Jenn wrote a suicide note and makes it his mission to save her. Jenn’s letter was a goodbye letter but because she wants to pack up and move away from her life in Maine. They start out with a great friendship and then it moves from there. They both save each other.  The story made me laugh and cry. I am not a military wife, but I can see the hardship that either party must go through. It really was a beautifully written story. This was my first book from Teresa Mummert, I want to go out and read all of her books. Go get this NOW!!! I saw that it is $.99 wow that is less than 1 buck for an AMAZING read.