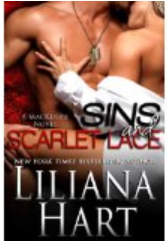 Synopsis:
Declan MacKenzie has loved the same woman for as long as he can remember, but
after a mission early on in his career turns deadly, he realizes he can never
have a wife or family and keep them safe. So he watches her marry another man.

Sophia Huxley is involved in a nightmare. Her late husband has been
labeled a traitor and he’s made her the fall guy. There’s no one she can call to
prove her innocence. Except the man who broke her heart.

If you are into hot romance with some suspense, look no further. Liliana does an awesome job. This is book 9 in this series and it is the best one yet. The first few where short novellas but she has made the last 4 full on novels. She does not disappoint with this one. I love the MacKenzie family and it is good to catch up with all of them in this one. The book centers around Declan who, if you have read the series should have already grown to love. He pushes away the love of his life because he feels like he is protecting her. He has pushed her into the arms of a crazy man. Sophia loves Declan with all her heart, but to free her mind of him she marries the wrong man who is Declan’s best friend Kane. Kane has betrayed everyone and Sophia takes the fall. She has been set-up and has the key to millions of dollars and it is up to Declan to protect her. The plot has a twist that I did not see happening until a few sentences before it was revealed. The chemistry between Declan and Sophia is HOT!! I just love Declan’s character. He is all alpha but it is so hard to resist him. I highly recommend you rush out and read this. If you have not read any of the others read those as well. Liliana does a great job of adding the suspense with all of the hot sex mixed in. Declan is definitely on my book boyfriend list.

Make sure when you are done you pre-order Kill Shot. That’s is the next book and I am sure you don’t want to miss it.