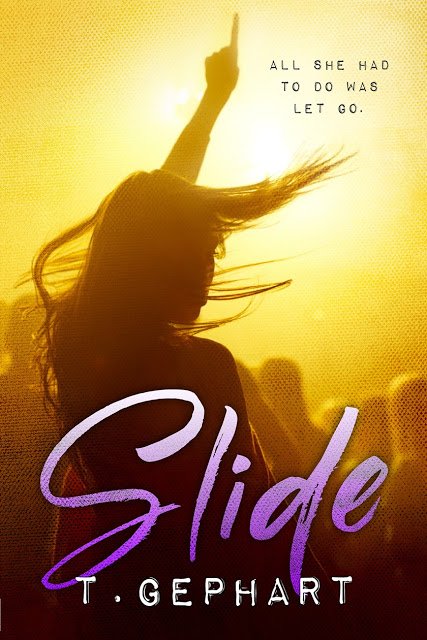 Touring as an opening act for a huge rock band and landing a record contract means you’ve hit the big time, right?

Sadly, neither of those things gave Rusty Crawford, lead guitarist of the band Black Addiction, worldwide fame and fortune. Which was a shame because he had the lifestyle down to a fine art—without the clichéd stint in rehab.

Even being back in the Bronx, paying his dues didn’t rattle the charismatic axe man, ladies loved him and men wanted to be him. Fate would just have to catch up. Seemed like fate had more than just a platinum album planned for his future.

Alison Williams had the perfect life. Or at least she did until her world came crashing down around her, in the most epic way.

With her future no longer a certainty she finds herself out of her comfort zone and into unchartered territory—a place where Rusty Crawford likes to spend most of his time.

Will the charming and ridiculously hot rock god help her find her feet, or send her further down the rabbit hole? One thing was for sure; both of them were in for the ride of their lives.

ADD TO GOODREADS
REVIEW by Monique
GRAB your panties and hold on tight, because rockER Rusty Crawford will
slide in to your heart!
Rusty Crawford is the sexy lead
guitarist and song co-writer for the band Black Addiction. Rusty is content
with his life, because his band is just about to release an album   which he believes will out them on the map
in the rock industry and he has countless women until one refuses him – Alison
Williams.
“Seeing her for the first time that night all those weeks ago was like a
kick in the balls. There had been something different about her that demanded
attention. And it wasn’t just that she was beautiful in the most curious way.
Sure she was stunning and her body looked pretty happening from what I could
see, but it was more than that. It was all so understated, downplayed-like she
didn’t need all the tricks some girls needed to make them look good. She was
raw.”
Alison had been practically raise by
her grandparents and has spent her entire life trying not being like her mother,
an 80’s groupie. With a mother who does not know her own daughter, her mother
cannot tell her who her father is, her mother currently working a pole as a
career with financial assistance of Alison’s grandparents,  Alison decides to put herself through college
and becomes a paralegal at a law firm in Manhattan. While waiting on her next
promotion, Alison and boyfriend, Rob Meyers, have been dating for the last two
years.
“I can be neurotic and I overthink things. Sometimes I’m not great
at communicating.”
On a verge of a promotion and the
possibility of her relationship going public, Rob has a ‘special date’ planned
for Alison. What Alison never expected was her date to leave her single, jobless,
and soon to be eviction!
“…I’d worked for in the last two years was gone. The man I’d encouraged and
loved for two years dumped me without a second thought.”
With nothing to lose, Alison decides
to go to the bar where she last saw the unforgettable hot man she only dreamt
about having in hopes he makes her forget about everything wrong in her life.
“First about the dumbass boyfriend, then we can talk about me. Another panty-melting
grin. Thank God I was on birth control because I couldn’t be sure I wouldn’t
spontaneously conceive by the glow of his smile.”
What Rusty and Alison did not expect was
how easy their chemistry they are together, Alison wants so much to be able
like Rusty – “I don’t give a shit attitude.” Rusty decides to help with Alison
build her self-confidence and become friends.
“That’s what not giving a shit is. It’s about you not caring what about
you not caring what other people think of you and doing what you need to do.
For you.”
When their friendship starts to turn
into something more, Alison‘s life is thrown another curve ball doubting all
the decisions in her life. Has Rusty taught her enough to handle the ups and
the downs her life is demanding?
SLIDE will capture your attention immediately and will be unable to put
the book down with sexy ass rock star, Rusty Crawford, holding on to our damn
panties of his roller coaster of emotions of FRIENDSHIP, JEALOUSY, SADNESS, LAUGHTER,
DISCOVERY, HOT SEX SCENES, and LOVE.
“My heart started to beat so fast I wasn’t
sure the bastard wasn’t trying to rip a hole in my chest and power walk out the
door.”
T. Gephart’s
first novel in the Black Addiction series, SLIDE, receives – 4.5 ROCKING STARS! 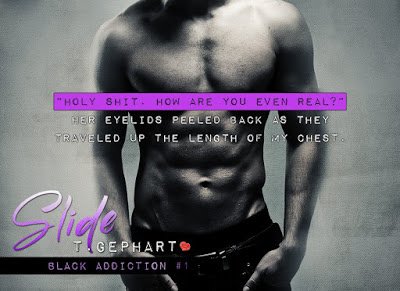 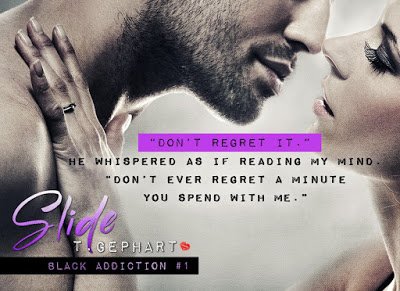 It was him. My beautiful mystery man. The one who I’d seen plenty but never spoken to. He was standing in front of me, smiling.

In hindsight, I shouldn’t have been so surprised. There weren’t many bars in our little neighborhood where you didn’t need a Hep C shot before you entered. This particular establishment promised an impressive beer menu without the risk of a communicable disease, so it would stand to reason he would know about it too.

“Hi.” Was all I was able to manage, convinced he was probably talking to someone else. Perhaps he meant the Amazonian redhead who was sitting to my left, openly staring—that would make a hell of a lot of more sense. They could probably shoot joint commercials for teeth whitener and make adorable, if not freakishly tall, children together.

“I couldn’t help but notice your friend stole your drink. Ordinarily I’d overlook such thievery, but I’d hate for there to be a brawl in my favorite bar. So in the interest of keeping the peace, I’d like to replace it for you.” His voice smooth, as was his delivery. I had to remember to breathe.

“She wasn’t going to drink it, but you can totally buy her another drink,” Renee answered before I’d gotten the chance. Her smile widened as she turned to face me and mouthed the words “he’s hot.” She needn’t have bothered; his hotness was not something that needed to be confirmed.

“That’s okay, I’m good.” Thankfully words came out of my mouth even if they sounded in no way intelligent.

“Well, glad to hear you’re good. Nice to meet you, my name is Rusty.” He smiled as he moved in closer, his hand signaling the bartender. “What were you drinking?”

In what I can only explain as temporary insanity—probably from the shock of having the beautiful man talking to me—I blurted out, “I have a boyfriend.”

I officially wanted to die.

While I did have a boyfriend, and hopefully in a few hours I would be moving into his upscale apartment, there was no reason to announce it so dramatically. Almost as if to prove that I hadn’t secretly fantasized about him while in the shower every day this week—which I had. Sweat prickled at my brow.

“Is that some code for you’re not thirsty?” Rusty’s lips curved in amusement. While the words weren’t sexy, the humor in his voice was a definite turn on, a hot button straight to my libido as he stood there grinning at me.

“Well, would you look at the time? I have a thing, wouldn’t want to be late.” Renee tapped her naked wrist—her watch missing in action, as was her tact. “Call me, Ali.” She gave me a hug and whispered, “If you don’t screw this guy, you’re dead to me.” And just like that, she evaporated from the room.

“Your friend always bail on you like that, Ali?” Rusty’s voice curled seductively around my name as he smiled, moving to the barstool Renee had vacated.

“It’s Alison.” Ali was just too personal, like him kissing me on the mouth. I totally would not have been okay with that. Mostly. 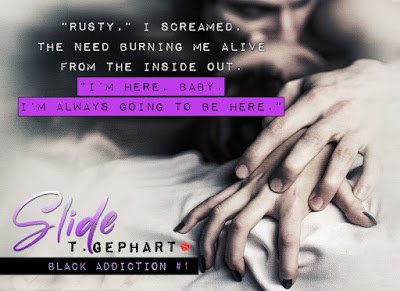 T’s approach to life has been somewhat unconventional. Rather than going to University, she jumped on a plane to Los Angeles, USA in search of adventure. While this first trip left her somewhat underwhelmed and largely depleted of funds it fueled her appetite for travel and life experience.

With a rather eclectic resume, which reads more like the fiction she writes than an actual employment history, T struggled to find her niche in the world.

While on a subsequent trip the United States in 1999, T met and married her husband. Their whirlwind courtship and interesting impromptu convenience store wedding set the tone for their life together, which is anything but ordinary. They have lived in Louisiana, Guam and Australia and have traveled extensively throughout the US. T has two beautiful young children and one four legged child, Woodley, the wonder dog.

An avid reader, T became increasingly frustrated by the lack of strong female characters in the books she was reading. She wanted to read about a woman she could identify with, someone strong, independent and confident and who didn’t lack femininity. Out of this need, she decided to pen her first book, A Twist of Fate. T set herself the challenge to write something that was interesting, compelling and yet easy enough to read that was still enjoyable. Pulling from her own past “colorful” experiences and the amazing personalities she has surrounded herself with, she had no shortage of inspiration. With a strong slant on erotic fiction, her core characters are empowered women who don’t have to sacrifice their femininity. She enjoyed the process so much that when it was over she couldn’t let it go.

T loves to travel, laugh and surround herself with colorful characters. This inevitably spills into her writing and makes for an interesting journey – she is well and truly enjoying the ride!

Based on her life experiences, T has plenty of material for her books and has a wealth of ideas to keep you all enthralled. 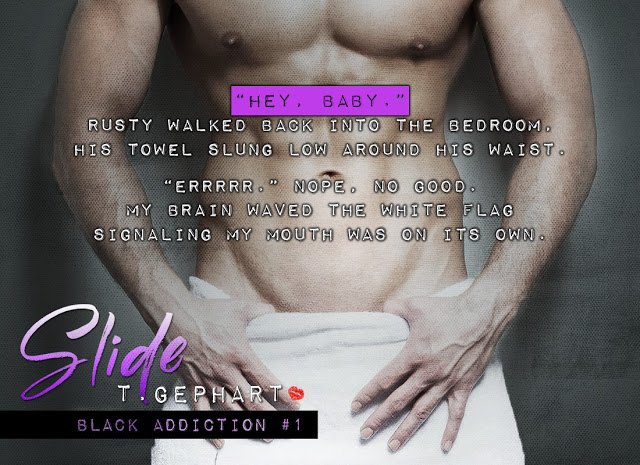