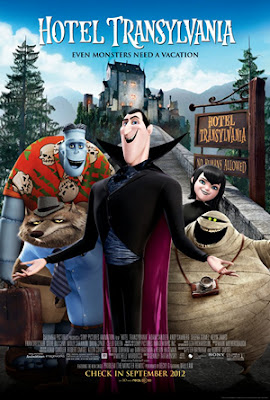 Hotel Transylvania
Directed by: Genndy Tartakovsky
Screenplay by: Peter Baynham and Robert Smigel
Story by: Todd Durham and Daniel Hageman & Kevin Hageman
Produced by: Michelle Murdocca
Executive Producer: Adam Sandler, Robert Smigel
Cast: Adam Sandler, Andy Samberg, Selena Gomez, Kevin James, Fran Drescher, Steve Buscemi, Molly Shannon, David Spade, CeeLo Green
Synopsis:
Welcome to Hotel Transylvania, Dracula’s lavish five-stake resort, where monsters and their families can live it up, free to be the monsters they are without humans to bother them. On one special weekend, Dracula has invited some of his best friends – Frankenstein and his wife, the Mummy, the Invisible Man, the Werewolf family, and more – to celebrate his beloved daughter Mavis’s 118th birthday. For Drac, catering to all of these legendary monsters is no problem – but everything could change for the overprotective dad when one ordinary guy stumbles on the hotel and takes a shine to Mavis.

MY THOUGHTS:
We were excited to watch this movie, especially since we are big Adam Sandler fans. Plus when we arrived at the theater we ran into the lovely Lisa from Planet Weidknecht. Hotel T is a super cute and funny movie. I would check in and hang out there on Vacation. We took the little monkey (2) to see this but really it is for older kiddos. My little Monkey was really excited to see this movie because of the “Call Me Maybe” song that Mavis sings(which has now since been removed from YouTube), however she became inpatient when it did not come on. In fact that is what she talked about after the movie, “there was no call me maybe”. I would definitely recommend checking it out for yourselves. We give it two thumbs up for funny and entertaining.