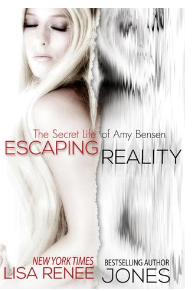 His touch spirals through me, warm and sweet, wicked and hot. I shouldn’t trust him. I shouldn’t tell him my secrets. But how do I not when he is the reason I breathe? He is what I need.

At the young age of eighteen, tragedy and a dark secret force Lara to flee all she has known and loves to start a new life. Now years later, with a new identity as Amy, she’s finally dared to believe she is forgotten–even if she cannot forget. But just when she lets down her guard down, the ghost’s of her past are quick to punish her, forcing her back on the run.

On a plane, struggling to face the devastation of losing everything again and starting over, Amy meets Liam Stone, a darkly entrancing recluse billionaire, who is also a brilliant, and famous, prodigy architect. A man who knows what he wants and goes after it. And what he wants is Amy. Refusing to take “no” as an answer, he sweeps her into a passionate affair, pushing her to her erotic limits. He wants to possess her. He makes her want to be possessed. Liam demands everything from her, accepting nothing less. But what if she is too devastated by tragedy to know when he wants more than she should give? And what if there is more to Liam than meets the eyes?

Review
Escaping Reality captures you in from the first couple of lines. “Amy” realizes she is in danger and needs to drop everything at that moment and flee. Unfortunately this is a familiar scene to her. She finds herself in the airport with a new identity and headed across the country. It is there she is pulled towards Liam. Liam is a strong personality who is running from his own demons. He is strong confident and sexy. Liam is determined to pull Amy into is life. Their relationship starts off fast and spiraling out of Amy’s control. She does wants to let go even though everything is screaming at her to not let Liam in. Liam is as open as he can be towards Amy letting her know he can trust him. Their relationship is intense and erotic. My heart broke for Amy in some of her scenes from her past and everything she has had to endure to survive. This is a cliffhanger ending that will leave you wondering what will happen and also what the hell just happened.
In true fashion to all of Lisa’s work she had my mind working overtime to figure out the story. I was applauding her brilliance but yet cursing her at the end.
I absolutely loved this book. This is a new writing venture for Lisa Renee Jones and she did a fabulous job.
Infinite Possibilities is the 2nd book in this series. There is not currently a release day, but I can guarantee I will be looking out for it.