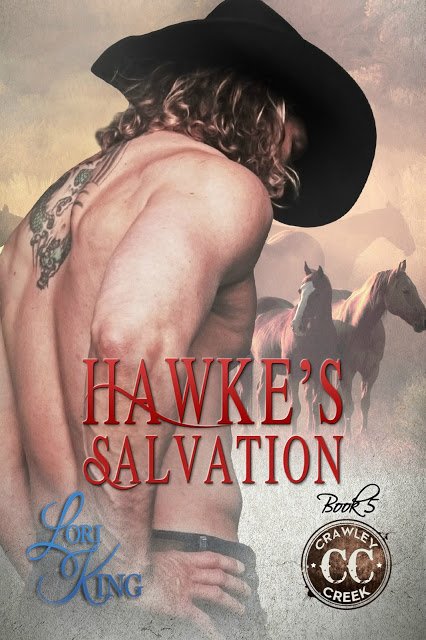 Hawke Kapshaw can’t stop fantasizing about the new ranch psychiatrist Jeannette Hall. A city girl with more education then common sense, she is the polar opposite of the ranch-raised Crawley Creek brothers. He knows he should stay away from the fiery, uptight woman, but he’s captivated and can’t keep his distance. If only he could figure out a way to show her he can be the man of her dreams.

Dr. Jeanette Hall didn’t come to North Dakota to find a man, but she’s surrounded by them at the Crawley Creek ranch. Her dreams have been invaded by the oh-so-potent, Hawke Kapshaw, but she’s heard of his exploits, and she’s not interested in being another notch in his belt.

Can a girl with trust issues accept a man who hides his emotions behind sarcasm and innuendos? How long can they deny the sparks flying between them? Will Hawke be Jeanette’s downfall, or will she be his salvation? 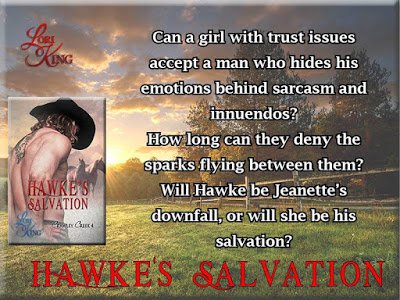 Purchase Links
AMAZON US / UK / CA / AU
B&N / KOBO / iBOOKS
ARE / SMASHWORDS
Excerpt
He was reading the back of the romance novel when she threw open the bedroom door, and his mouth dropped open at the sight of her. Snug blue jeans covered her firm thighs and long legs, and a t-shirt emblazoned with the Eagles logo did nothing to hide her pert breasts.

“What are you doing?” she asked, frowning at the book in his hand.

“Waiting for you, and checking out your library. Pirates? Really? I wouldn’t have taken you for a pirate girl,” he teased, dropping the book back onto the end table. They were close enough to each other now that he could feel her body heat, and he hoped she could feel the fire rolling through him.

“I borrowed it from the ranch library,” she said, looking away quickly. “I was bored.”

“I’ll have to ask the guys about that one. I don’t recall any of them being into pirates, but they’re a kinky lot.”

“Are you done making fun of me?” she hissed irritably.

Sighing, he shook his head, “Oh sweet Jeanette, you just don’t get it. I’m not making fun of you at all. I’m trying to find out more about you. I want to know what makes you tick.”

“Why not? Is it so bad that I know you like a badass man who can make you swoon by saying ‘aaargh’?”

She giggled and hurried to cover her mouth, shaking her head. “Is that what you got from the book? Well, I’m sorry to disappoint, but it’s not the pirate’s lack of language that makes the book interesting. It’s the happily ever after in spite of all of the danger.”

Hawke stepped closer, pleased when she held her ground. Their chests were touching as he said, “So danger turns you on?”

Her breath hitched, and she swayed slightly. Instantly he gripped her hips, holding her steady as their gazes locked. Her lips parted, and for a moment, he thought she was going to let him kiss her. Within a millisecond, her demeanor changed and lightning flashed in her eyes as she pushed his hands away. “We’d better get to the barn.”

Stepping around him, she led the way back to the front door, and he took the opportunity to stare at her tight ass encased in denim. Damn, it would be fun to push her up against the wall and peel those jeans off her. 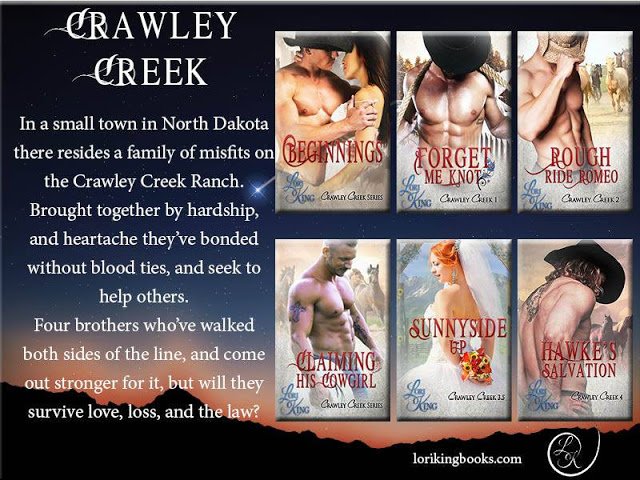 Crawley Creek Series
By: Lori
King
In a small town in North Dakota there resides a family of misfits on the Crawley Creek Ranch. Brought together by hardship, and heartache they’ve bonded without blood ties, and seek to help others. Four brothers who’ve walked both sides of the line, and come out stronger for it, but will they survive love, loss, and the law?
Beginnings (Prequel)
AMAZON US / UK

Best-selling author, Lori King, is also a full-time wife and mother of three boys. Although she rarely has time to just enjoy feminine pursuits; at heart she is a hopeless romantic. She spends her days dreaming up Alpha men, and her nights telling their stories. An admitted TV and book junkie, she can be found relaxing with a steamy story, or binging in an entire season of some show online. She gives her parents all the credit for her unique sense of humor and acceptance of all forms of love. There are no two loves alike, but you can love more than one with your whole heart.

With the motto: Live, Laugh, and Love like today is your only chance, she will continue to write as long as you continue to read. Thank you for taking the time to indulge in a good Happily Ever After with her.