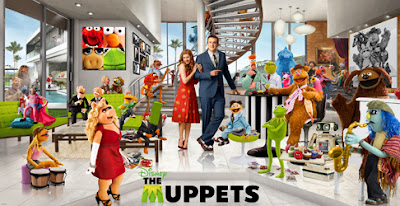 MY THOUGHTS:
We were able to go see an advanced screening of the Muppets the weekend before it opened!! I was so excited and nervous because it was the first time for Alexandra to watch a movie in the theater! She loves the Muppets so I was hoping that she would be mesmerized by them and be absolutely wonderful… I was half right! She was really really good and loved the movie but could only sit for about 45-50 minutes before needing to move around. Even still she was really good and now every time she sees the Muppets commercial, she jumps up and down yelling Muppets Theater!! I love it and LOVED the movie!! It made me think about when I was a kid!! This is really about the Muppet Show (not a “normal” Muppet Movie) and made me miss it terribly! I really hope that maybe they will start making the Muppet Show again!! I know we would tune in! We definitely recommend this feel good family movie!! The Muppets get two thumbs up from us… Mah Na Mah Na!!

Disclosure: This post is a part of Disney Insiders. I received 3 complimentary movie passes to attend a pre-screening. I was not compensated to write a positive or favorable review. This is Keeping Up With The Rheinlander’s personal opinion.