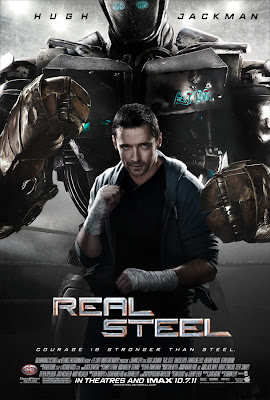 Genre: Action-Drama
Rating: PG-13
U.S. Release date: October 7, 2011
Cast: Hugh Jackman, Dakota Goyo, Evangeline Lilly, Anthony Mackie, Kevin Durand
Director: Shawn Levy
Producers: Don Murphy, Susan Montford, Shawn Levy
Executive Producers: Steven Spielberg, Jack Rapke, Robert Zemeckis, Steve Starkey, Mary McLaglen, Josh McLaglen
Screenplay by: John Gatins
Story by: Dan Gilroy and Jeremy Leven
Based in part on the short story “Steel” by: Richard Matheson
ABOUT:
A action ride set in the near-future where the sport of boxing has gone high-tech, “Real Steel” stars Hugh Jackman as Charlie Kenton, a washed-up fighter who lost his chance at a title when 2000-pound, 8-foot-tall steel robots took over the ring. Now nothing but a small-time promoter, Charlie earns just enough money piecing together low-end bots from scrap metal to get from one underground boxing venue to the next. When Charlie hits rock bottom, he reluctantly teams up with his estranged son Max (Dakota Goyo) to build and train a championship contender. As the stakes in the no-holds-barred arena are raised, Charlie and Max, against all odds, get one last shot at a comeback.

“Real Steel” is directed by Shawn Levy (“Night at the Museum” franchise and “Date Night”).

“Real Steel” is about a former boxer (Hugh Jackman) who, against all odds, gets one last shot at a comeback when he teams up with his estranged son (Dakota Goyo) to build and train the perfect contender for the new high-tech sport of robot boxing.

I am a big fan of Hugh Jackman and he definitely doesn’t disappoint in this movie. However I think that Dakota Goyo steals the scenes in this movie! Dakota is a great actor and I expect to see him a lot in the future! Before seeing the film I thought that it would be more about the boxing but it is really more about family (not going to give anything else away!!).  I thought this was a heartwarming movie with real “flare”, I even teared up at one point. Real Steel kept my attention throughout the whole movie. My hubby thought is was good but a little “cheesy”(a few days later stated “I really liked that movie”). We both agree that we would recommend this movie to others! We give it two thumbs up!

Disclosure: This post is a part of Disney Insiders. I received 2 complimentary movie passes to attend a pre-screening. I was not compensated to write a positive or favorable review. This is Keeping Up With The Rheinlander’s personal opinion.