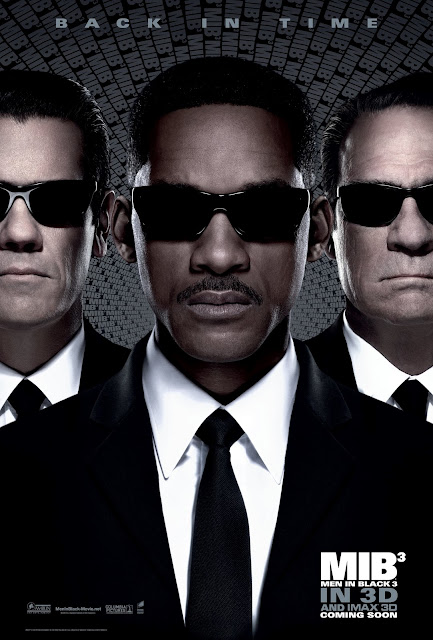 In Men in Black™ 3, Agents J (Will Smith) and K (Tommy Lee Jones) are back… in time. J has seen some inexplicable things in his 15 years with the Men in Black, but nothing, not even aliens, perplexes him as much as his wry, reticent partner. But when K’s life and the fate of the planet are put at stake, Agent J will have to travel back in time to put things right. J discovers that there are secrets to the universe that K never told him — secrets that will reveal themselves as he teams up with the young Agent K (Josh Brolin) to save his partner, the agency, and the future of humankind.
Directed by: Barry Sonnenfeld
Written by: Etan Cohen
Based on the Malibu Comic by: Lowell Cunningham
Produced by: Walter F. Parkes & Laurie MacDonald
Executive Producers: Steven Spielberg  & G. Mac Brown
Cast: Will Smith, Tommy Lee Jones, Josh Brolin, Jemaine Clement, Michael Stuhlbarg, and Emma Thompson

This film has been rated PG-13 by the MPAA for SCI-FI ACTION VIOLENCE, AND BRIEF SUGGESTIVE CONTENT.


MY THOUGHTS:
I was pretty excited when I received an email inviting me to the pre-screening of MIB3!! I loved 1 & 2, and watch either of them when they are on TV (the hubby makes fun of me)! This was only my second movie to watch in 3D but did not care for the 3D effects this time. I felt that I personally would have rather watched it “regularly”. However I really enjoyed the movie. It is a great continuation of this series, with some history into the relationship between J & K. The Hubby & BIL also watched MIB3 and both said they liked it, and that some of the 3D effects were “awesome”.  Overall we give this movie 2 thumbs up for entertaining and fun. I definitely recommend watching the movies in order to fully understand the relationships and history of the Men In Black.
Have you seen MIB3… what did you think?