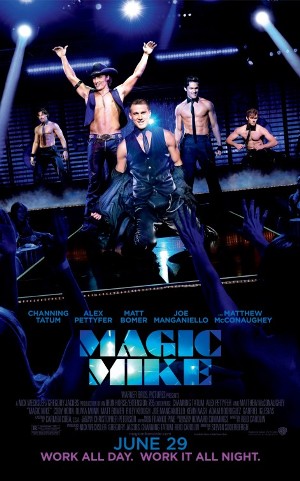 “The law says that you cannot touch. But I think I see a lot of lawwwbreakers up in this house tonight.” – Dallas

MY THOUGHTS:
I was super excited to see this movie (so much so my hubby gave me a really hard time). I am a big Channing Tatum fan (how could you not be – Look at him!!). He definitely shows his moves and all the guys look super HOT in the movie. It was not what I was expecting… I thought there would be more dancing/stripping in the movie but there wasn’t. I was disappointed in the fact that Big  “D” Rich ~ Joe Manganiello (or Ken ~ Matt Bomer, or Tito ~ Adam Rodriguez) was not in the movie more. As much promoting that Joe Manganiello is doing I was shocked that he only had a few lines/scenes. For me this movie is more for the experience… get your girls together and have a few drinks while watching HOT guys on screen. I did enjoy my experience and would watch it again!! Overall I thought the movie was good. I would say go watch it for the HOT guys and the experience of a girls night out, the storyline itself was just okay to me!

Disclosure: I PAID for my own ticket and wanted to share my thoughts on the movie. I was not compensated to write a positive or favorable review. This is Keeping Up With The Rheinlander’s personal opinion.