After surviving a devastating car accident that took her father’s life, Bryn Woods feels like she has nothing left in her hometown of Savannah, GA. Along with losing her father, her boyfriend, Tyler, unexpectedly leaves town the same time of the accident. Feeling alone, broken and confused, Bryn leaves Savannah for college in New York City to escape her heartbreak.

Four years later, Bryn returns to Savannah to live in her childhood home. Slowly, she begins to let the people of her past back into her life. She lets the protective walls she’s built to protect herself crash down around her. As she begins to find love again with Tyler, secrets start to unravel themselves about his past. Tyler has secrets of his own. Secrets connected to the death of Bryn’s father. Secrets Tyler didn’t even know he kept.

A story of heartbreak, discovery, renewal and happiness. I really enjoyed this book. It is not the same storyline replayed. This story is about a girl who in a matter of 24 hours lost everything she loved. She became broken and living in a shell. She leaves but something brings her back to her hometown to face everything and everyone she left. Once back she is immediately thrown into the lives of some of the people who hurt her. She learns to reconnect and love again, but there is a discovery that makes everything spin out of control. Did I see what was going to happen, yes. But the way the story is written is very beautiful and I loved the story. A definite must read. You will love Bryn, through everything she has been through she is strong. 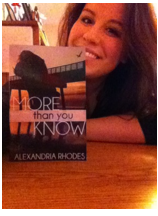 Alexandria
Rhodes is a first time novelist from the good old state of Ohio. She is a
recent college graduate with a degree in English and Creative Writing.
Alexandria has always known she needed to write and has been doing so ever
since she bought a typewriter at a garage sale when she was nine. With hundreds
of pages of plot ideas, scripts and character descriptions, it is no surprise
that she finally came around to writing a book.
Alexandria enjoys reading, writing, reviewing, spending time with family, tweeting
(a little too much) and traveling, especially to Savannah, GA and New York
City.
Her writing is heavily influenced by her surroundings and the people in her
life. She hopes that her stories will touch the hearts of her readers.
http://www.goodreads.com/book/show/17618537-more-than-you-know
http://www.twitter.com/A_L_Rhodes
https://www.facebook.com/AlexandriaLRhodes
https://www.facebook.com/morethanyouknowbook
http://www.alexandriarhodes.com