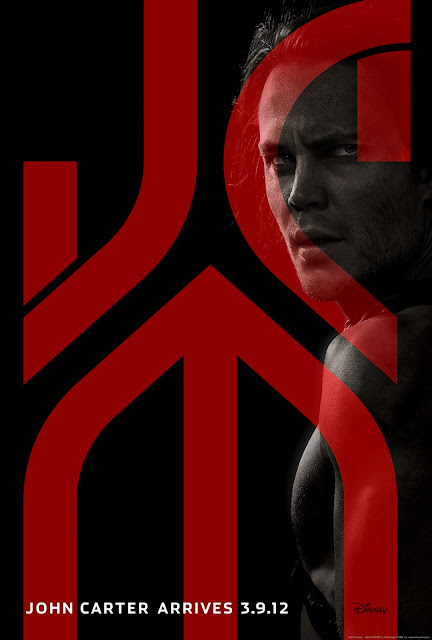 This is the first movie that my husband has wanted to go see in a long time and I have to admit… it looks pretty darn good!! Today it comes out in theaters and maybe the Hubby and I can sneak off for a date : )
Here is a 10 minute look at John Carter…
Let me know what you think? Are you going to go see it??
Also check out the 10 things Parents should know…

I recently had the tremendous privilege to see an advanced screening of Disney’s John Carter. I know there have been many mixed signals in the media lately concerning this movie. I hope that the answers to these questions help our readers make a more informed decision for themselves.

1. What’s it all about?
The author, Edgar Rice Burroughs, wrote the John Carter series of sci-fi/adventure stories about 100 years ago. Burroughs was also the author of Tarzan and many other stories. The main character, John Carter, is transported to the planet Mars. On Mars, he discovers he has superior physical abilities, such as the ability to leap 100 yards and unmatched physical strength. He eventually wins the respect of the local population of alien creatures know as the Tharks. He also becomes involved in assisting the human-like royalty of Mars against the uprising of a group who seeks to strip-mine the planet. If any of these concepts sound familiar – that is because much of our superhero fantasy and science-fiction over the past century has been created from ideas borrowed from Burroughs’ classics.

2. Will I like it?
Yes. If you are reading this site, most likely yes. If you like Star Wars or any other action sci-fi, then yes. You can really tell this movie was created with the passion that only a lifelong fan of this series could devote. Andrew Stanton, the writer/director, was actually working on this film’s screenplay while WALL-E was still in production (before a studio even signed on to do the project).

3. Will my kids like it?
If they are like you and you agree to the above, then yes. I plan on taking my 7-year-old son this weekend and I believe he will love it. It has something for everyone. Take your daughters to see this. It has amazing, strong female characters. In fact, many times they are the ones to fight the battles. Everyone will love Woola by the way – you’ll see.

4. How faithful is it to the books?
Disclaimer – I have not read the books in over 20 years. Even though many sites state that this movie is based on The Princess of Mars, actually it uses elements from Burroughs’ first three books in the series. This way, the audience gets to see the best parts of a third of the series, including more alien life and epic battles. One main difference between the books and movie is how he is transported to Mars; but fans of the book most likely won’t be disappointed with this change.

5. When’s the best time for a bathroom break?
At exactly 1 hour and 5 minutes in there are a few minutes of dialogue you could miss. When the heroes stop for a breather after the halfway point battle – head to the latrine.

6. How are the special effects?
Fantastic. What else could you expect from a movie that was created by Andrew Stanton? The man is behind WALL-E, Toy Story (1, 2 & 3), Finding Nemo, A Bug’s Life, and Monsters, Inc. Not to mention (if you believe the press buzz going around), this movie had a budget of nearly a billion dollars. The imagery is simple breath-taking.

7. What about the 3D?
This is probably one of the only movies where I would say that seeing it in 3D is worth it. Stanton made this movie to use 3D effects just to give the movie depth. This means that there are no “gimmicks” that use the 3D to overwhelm the viewer with “jumping out of the screen” surprises. Also this movie is filmed in primarily desert type regions, so the subtle darkening effect that 3D glasses tend to have on movies is not as noticeable. That being said, seeing it in 2D would not diminish the quality of the movie either.

8. It is rated PG-13. How PG-13 is it?
This was one of my primary concerns. I have younger children, so I wanted to see if this would be a movie I could introduce them to. Here’s the skinny: there is a lot of violence. The majority of the bloodshed is greenish alien blood, so some parents might find it easier to stomach with their children than others. Most of the fighting is sword play, so keep that in mind also. Hardly any foul language is spoken and there are no real intimate moments that need young eyes covered. [SPOILER ALERT, BUT IMPORTANT FOR PARENTS TAKING YOUNG CHILDREN] The one real moment I had concern about occurs in a flashback sequence where you briefly see the clothed remains of his dead wife and child. This is the one event that is a bit disturbing on anyone’s eyes – young or old. This scene takes place during an onslaught of a fight scene. If you want to cover younger eyes, here it is – when the Thark army is taking on John Carter by himself, he goes into a sort of battle rage. When you see this scene, he will flashback to images of his Virginia home which was burned to the ground, he will go back to the fight, the next flashback is that image – after that it is done. [END SPOILER]

Your mileage may vary on this. I will be taking my 7-year-old to see it, but he has also seen the entire Lord of the Rings trilogy (does that make me a bad dad?). If he can handle the battle of Helm’s Deep, then he can definitely handle this.

9. It is a Disney movie. Why can I not find any John Carter toys in the stores?
Disney decided with this movie not to license mass market toys. I know, this is a strange decision; after all, they produced Pirates of the Caribbean toys! Well, that has a good bit to do with it also. The other non-animated toy lines which have been produced in the past have never been big hits except with the collectors. With that in mind, Disney is only going to license John Carter to higher-end collectibles manufacturers. If the movie proves to be huge and the sequels get their green lights, then maybe we will see the mass market open up.

10. Will I want to see it again?
Yes – and you will hope that it does well enough to merit the two sequels that Andrew Stanton already has written and is ready to produce. You will probably want to go ahead and pre-order it on Blu-ray as well.

Disclosure: This post is a part of Disney Insiders. This is NOT a sponsored post. We wanted to spread the word about the Real Steel Movie and share with our readers.