IN LEAH’S WAKE
Author: Terri Giuliano Long
Pages: 352
Format: Paperback, Kindle
ISBN: 1456310542
Publisher: CreateSpace
BOOK BLURB
The Tyler family had the perfect life – until sixteen-year-old Leah decided she didn’t want to be perfect anymore.
While her parents fight to save their daughter from destroying her brilliant future, Leah’s younger sister, Justine, must cope with the damage her out-of-control sibling leaves in her wake.
Will this family survive? What happens when love just isn’t enough?
Jodi Picoult fans will love this beautifully written and absorbing novel.

I just wanted to thank Terri Giuliano Long for being a guest today! Enjoy…

Although I rarely listen to music while I write – too distracting – the inspiration for many of my stories arise from music. I’ll hear a song and it will lead me to a particular place. Listening to Miles Davis, for instance, brought me to the coffeehouse Zoe visits with Jerry. Music also helps me clarify themes. One night, on our way home from dinner, my husband, Dave, played the Bruce Springsteen album Greetings From Asbury Park. The song “Growin’ Up” struck a nerve and I insisted on listening to it over and over. In the song, I saw Leah, a good kid, just trying to grow up and make her way in the world.

When I wrote In Leah’s Wake, certain songs – like “Tupelo Honey,” “Showdown at Big Sky,” and “Face in the Crowd” – provided the emotional connection that helped me to define a moment. The novel opens with Zoe and Will listening “Tupelo Honey,” a sweet love song. “Showdown at Big Sky” foreshadows the showdown on the verge of taking place, and “Face in the Crowd” speaks to the profound loneliness Will feels as he waits up for Leah that night, imaging all the unthinkable horrors that might have befallen his daughter.

Because music came to play such a defining role in this book, I sometimes searched for music after writing a scene. The Liszt piano solo “Hungarian Rhapsodies” mirrors Zoe’s frenzied mind as she drives home from her motivational workshop, Leah asleep in the passenger seat, the day after Leah shows up drunk, at 3:00 a.m., after a wild party. “Don’t Cry For Me Argentina” also serves as a metaphor for Zoe’s state of mind, although this scene, with Zoe driving home wondering what to expect, was written around the music.

I heard “Champagne Super Nova,” from the Oasis CD What’s the Story? Morning Glory, when I stepped out of the shower one morning. Our house was wired for sound and Dave was playing the new CD he’d just bought. As with “Growin’ Up,” I insisted that he replay the song, and then replay it again. The pivotal scene, where Justine asks Leah for a cigarette and Leah allows her little sister to smoke, blossomed as I listened to the music.

“Paranoid Android,” from Okay Computer by Radiohead, “I’m On Fire,” from the Bruce Springsteen album Born in the USA, “Stardog Champion,” from Stardog Champion by Mother Love Bone, “I Loves You Porgy” from Porgy and Bess, recorded by Keith Jarrett, on The Melody At Night With You, and “Misguided Angel,” from The Trinity Session by the Cowboy Junkies – all set the emotional stage for scenes I was about to write. Without music, In Leah’s Wake would be a very different – dare I say less compelling? – book. Or it would have been less compelling for me, the writer, anyway.

For those of you who, like me, find inspiration in music, here’s the soundtrack. Enjoy!

ABOUT THE AUTHOR:
Terri Giuliano Long is the bestselling author of the award-winning novel In Leah’s Wake. Books offer her a zest for life’s highs and comfort in its lows. She’s all-too-happy to share this love with others as a novelist and a writing teacher at Boston College. She was grateful and thrilled beyond words when In Leah’s Wake hit the Barnes & Noble and Amazon bestseller lists in August. She owes a lot of wonderful people – big time! – for any success she’s enjoyed! 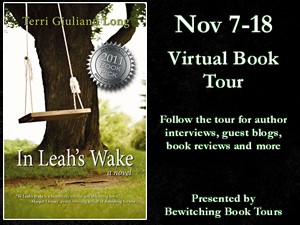