A quick thanks to Paige Cuccaro for guest posting today. Check out her book Hellsbane just released…

Setting: The other character
What if TWILIGHT had been set in San Francisco, or if INTERVIEW WITH A VAMPIRE had taken place in a small town in Idaho? Would the stories have been as good? Maybe. Would they have been as successful? Maybe not. Choosing the right setting for your story is as important as choosing the right character. In many ways the setting for a story plays as much of a role in the plot as the characters.

In TWILIGHT, the rainy over cast days of Forks made it possible for Edward and the rest of the Cullens to mingle with humans and pose as one of them. When the setting changed to sunny days it had a notable impact on the story.

New Orleans has always been a Mecca for the supernatural, and the rich culture and beliefs of the Creole people. Anne Rice’s INTERVIEW WITH A VAMPIRE incorporated that palpable magic ghosting through the city to influence the beliefs and behavior of her characters.

So how do you decide on the perfect setting for your story?

Well, for me, Pittsburgh Pennsylvania was a great fit for my latest book, HELLSBANE for several reasons. The city has a rich history from its early days being settled by the Dutch, to its dirtier years when it earned its nickname as the Steel City, to present day when it enjoys a reputation of friendly people with a love of great art, music, culture and kick butt sports teams.

My lead character, Emma Jane is a Pittsburgher, born and raised and the city offers the story some amazing backdrops. The overlook on Mount Washington, where visitors can take a ride on an incline and have an awesome view of the whole city, plays a role in two sword fighting scenes. Would the scenes have worked somewhere else? Maybe, but not as well.

Another scene takes place in Troy Hill, where Saint Anthony’s Chapel sits. The old church houses the second largest collection of religious relics in the world and those relics as well as the church have a direct impact on Emma Jane just as she discovering her new powers. I could’ve set the scene anywhere, but Saint Anthony’s was perfect because of those relics.

Aside from the great history, awesome cityscape, and amazing churches the other reason I chose Pittsburgh was because I personally knew and loved the city. I grew up just south of Pittsburgh and the city was a frequent destination throughout my life. All the places Emma visits, all the streets where the characters walk, talk, eat and sword fight, I’ve visited myself. Imagining them standing on the overlook, or eating at Primanti Brothers restaurant or standing outside the house on Cook Road was natural—easy.

Does that mean you can only set a story in a location you’ve been, or know well? Absolutely not. But like your characters, the better you know a setting the more real you can make it seem in the reader’s mind. And that’s always a goal for any writer.

But for those stories that absolutely must be set in a location you’ve never been, I highly recommend, Google Maps. Their satellite and street views are awesome! I like Google image searches too. A lot of times you can find pictures taken by everyday people that really give you an authentic feel for a place. And finally YouTube is a great resource to find vacation videos, documentaries or whatever, that just happened to have been filmed on the street where you need your character to live.

Ultimately the setting of your story should be a living breathing, contributing character. It should be as much a part of the book as any character and if you took it away, or replaced it by another, the story just wouldn’t be the same. If your setting sets the story, then you know you’ve found the perfect spot. 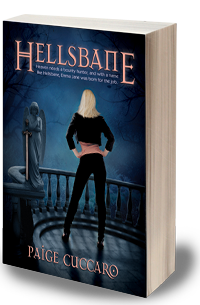 Emma Jane Hellsbane just found out she’s not human—or, at least, not only human. She’s half angel, too, and now Heaven’s got a job for her: round up all the Fallen angels and their red-skinned, horned devil-demon minions and boot their butts back into the abyss. Only problem? The demons and their Fallen masters fight back…and they don’t fight fair.

Luckily for Emma, she can put a stop to the constant threat of having her head hacked off if she figures out which Fallen angel is her father—and then kill him before he kills her. Of course, in the meantime, she’ll have to avoid accidentally seducing her angelic mentor, help an old friend conquer his own Fallen sperm donor, and basically save the world from a cataclysmic divine smack down.
No one said being Heaven’s bounty hunter would be easy. But with a name like Hellsbane, Emma Jane was born for the job.
Check out the rest of Paige Cuccaro’s Tour 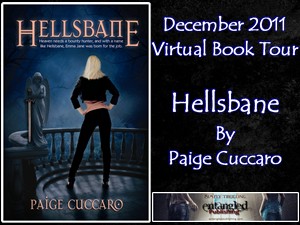 Disclosure: This Guest Post was provided by the Author as a part of the Bewitching Book Tours. This is NOT a compensated post.
Kindle
Print
Audio Book
Apple eBook