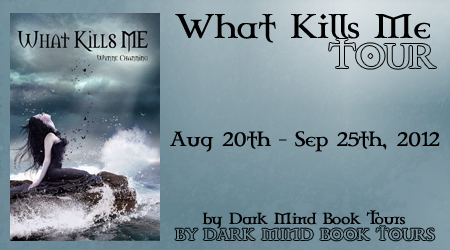 A note to my readers: You’ve just read the first few chapters of What Kills Me. You thought you knew what the story was going to be. But now that you’ve gotten to the fourth chapter, you are confused. That’s right. I’ve mislead you. And I’m not sorry.

My name is Wynne Channing. I am honored that Melissa has given me this space on her wonderful blog to be able to talk to you a little bit about my debut adventure novel and why the first three chapters are purposely misleading.
What Kills Me begins like any other romantic tale: an innocent heroine meets a handsome, suspiciously cold stranger. Axelia or Zee sneaks out to meet a new Italian friend one night; he dotes on her, gives her flowers and jewelry, and takes her to a dark spot where they can be alone. Will they make out? Will he become sparkly?
Unless “sparkly” is code for psychotic — not in this story. Zee’s new friend is a killer. A vampire. He attacks her, causing a terrible tragedy that will change Zee’s fate, and endanger the entire undead race. What follows is an intense hunt and much bloodshed as Zee fights to survive just another day, another hour. It is a story about bravery and fate. Death and deceit.
So one might ask: why did you give me the impression that this was going to be a sweet story of undead love? Because, I’m a brat. Kidding. Mostly.
I wanted you to first be comfortable with the story. I wanted you to feel like you recognized this formula and felt stable…before I tore the rug out from under you. What Kills Me is full of twists and turns. I thought the beginning, at least, should be conventional before the surprises arrived.
If you’re looking for swooning romance, there is some. But not the kind that you might expect. I think it’s best not to have any expectations and just enjoy the ride.
What Kills Me Links
Goodreads | Wynne Channing’s Website
What Kills Me is now $.99 on Amazon and Smashwords
Amazon US | Amazon UK | B&N | Kobo | iTunes 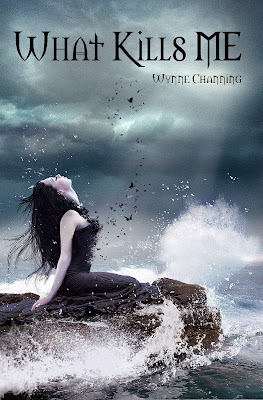 About the book:An ancient prophecy warns of a girl destined to cause the extinction of the vampire race. So when 17-year-old Axelia falls into a sacred well filled with blood and emerges a vampire, the immortal empire believes she is this legendary destroyer. Hunted by soldiers and mercenaries, Axelia and her reluctant ally, the vampire bladesmith Lucas, must battle to survive. How will she convince the empire that she is just an innocent teenager-turned bloodsucker and not a creature of destruction? And if she cannot, can a vampire who is afraid of bugs summon the courage to fight a nation of immortals? 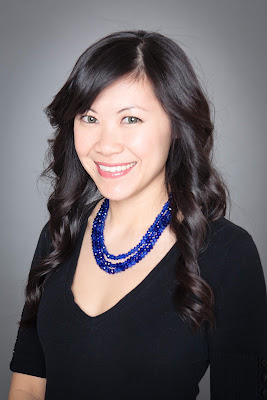 About Wynne:Wynne Channing is a national newspaper reporter and young adult novelist. Wynne loves telling stories and as a journalist, she has interviewed everyone from Daniel Radcliffe and Hugh Jackman to the president of the Maldives and Duchess Sarah Ferguson. The closest she has come to interviewing a vampire is sitting down with True Blood‘s Alexander Skarsgard (he didn’t bite). She briefly considered calling her debut novel “Well” so then everyone would say: “Well written by Wynne Channing.”
Connect with Wynne
Blog| Twitter| Facebook| Goodreads
Follow the rest of Wynne’s Tour 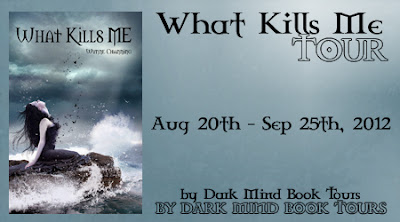 Disclosure: This Guest Post was provided by the Author as a part of the Dark Mind Book Tours. This is NOT a compensated post.
Kindle
Print
Audio Book
Apple eBook