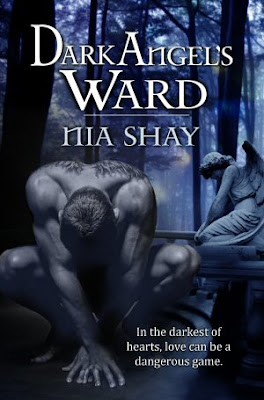 Author: Nia Shay
File Size: 846 KB
Publisher: Moonwild Press; 1 edition (January 27, 2012)
Language: English
ASIN: B0072Q2MD8
Summary:
Two years ago, Jandra Maxwell walked away from the secret Fairlight Society and started a new life in a quiet Texas town. When her former Ward, the dark angel Zeph, seeks her out and begs for her help, Jandra faces an impossible choice. She knows he can only offer her heartache, but she can’t turn her back on the only man she’s ever loved. Zeph teeters on the brink of madness, pummeled by emotions his angelic blood once rendered him incapable of feeling. Driven to protect Jandra from a threat he can only glimpse in nightmares, he refuses to leave her side. As they explore the mystery of his recurring dreams, they discover the Fairlight Society has been keeping a terrible secret — one they’ll kill to protect. Fighting for her life isn’t so easy when Jandra’s also fighting for her heart. Her inexorable attraction to Zeph may save them…or damn them both.

Not Your Average Hero

If you read romance novels, you know his type. You’ve seen him on the covers of countless beloved books­—broad-shouldered and barrel-chested, tanned skin glowing against the background colors, a commanding scowl or a confident smile on his lips. On the page he’s the ultimate alpha male—always in control, winning the heroine’s affections and defeating the villain with equal ease. And more often than not these days, he’s played by Jimmy Thomas 🙂

You won’t find that man in Dark Angel’s Ward. I don’t really even think of Zeph as the “hero” of the story. He’s not confident, he’s confused. His journey leads not toward reward, but redemption. He can’t be certain of his future because he can’t shake the ghosts of his past. And he’s definitely not fearless. He’s terrified…mostly of himself.

Zeph is a dark angel, born over three thousand years ago to a human woman and an earthbound angel. Over the course of centuries, he’s forgotten more of his past than he remembers. The only memories he can always hang onto are the years he’s spent with Jandra Maxwell (who is most definitely a heroine, by the way.) From her he’s gained something no dark angel before him has ever been known to achieve—the ability to feel emotion.

Understandably, being suddenly thrust into the highs and lows of emotional life after a few millennia of total detachment is pretty rough. He’s begun to dream about Jandra, alone and afraid and in danger. But, as I mentioned in my previous post, when he finds her again after two years apart, she’s certainly not waiting around on him to rescue her from anything. Poor Zeph is left brooding, uncertain of anything except his desire to win her forgiveness and her heart.

Trouble is, he doesn’t exactly grasp the nuances of romantic interaction, especially not when the object of his affections is furious with him. When the tried-and-true method of grabbing her and kissing the daylights out of her only makes things worse, he’s at a loss. Backing off would be the smart thing to do at that point, but Zeph can’t shake the feeling Jandra’s somehow in danger. Though he’s frightened, unsure of himself, and socially awkward to an epic degree, he knows he has to protect Jandra at all costs. And to that end, he’s relentless—kind of like that classic hero we all know and love.

ABOUT THE AUTHOR:
Nia Shay is a reclusive weirdo who lives in a tiny concrete box in the middle of the Arizona desert. (No, seriously.) In between dealing with mild OCD and an epic caffeine addiction, she finds time to mold the voices in her head into cohesive sarcastic remarks, and sometimes even a story or two. She has been penning such tales, almost all of them with a decidedly paranormal flavor, since the second grade. Now that paranormal fiction is the “in thing,” Nia has decided to overcome her extreme distaste for trends and jump on the ol’ bandwagon. Join her on her harrowing journey through the twisted corridors of her own mind—that is…if you dare.

How would you like a copy of Dark Angel’s Ward for yourself?? Nia Shay has generously offered one of our readers an e-book! Just enter on the Rafflecopter entry form below! If you have any questions or concerns about the Rafflecopter form please leave a comment. Good Luck and Thanks for entering. 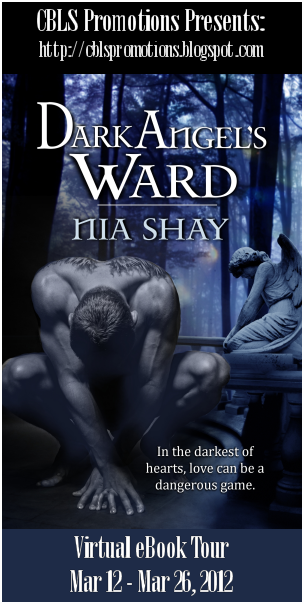 Check out the rest of Nia Shay’s Tour!!

Disclosure: This Guest Post and Giveaway was provided by the Author as a part of CBLS Promotions. This is NOT a compensated post.