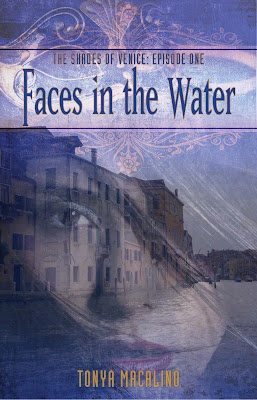 Faces In The Water
The Shades of Venice: Episode One
Author: Tonya Macalino
File Size: 609 KB

Who created that slide of silk across your skin as you reached for your cinematic lover? Who recorded the crushing weight of the grizzly as you fought for your life in the fictional wilderness? It is Lone Pine Pictures’ Alyse Kate Bryant who wraps your body in the story only your mind was privy to before.

A brilliant sensory immersion artist and a wild daredevil, Alyse will do almost anything for the perfect sensory file, but the violent death of her father has her teetering on the very edge of reckless sanity.
For just one night, Alyse seeks refuge in the arms of a beautiful stranger.

And her recklessness finally has consequences.

Now Alyse finds herself trapped in the flooded ruins of Venice, a quarantine camp for the carriers of Sleepers’ Syndrome. But it can never be that simple. Because the Sleepers’ Syndrome carriers who populate the camp are no longer as human as they seem.

The city of legend is bringing its legends back to life.

Amazon ~  Barnes and Noble
GUEST POST:
FREE! The Fugitive’s Tour of Venice
I’ve noticed that Melissa LOVES freebies.
So I’ve decided to come up with a little freebie of my own. Join me and the leading lady from FACES IN THE WATER, Alyse Kate Bryant, as she takes us on the Mach 10 tour of the former capitol of the Most Serene Republic, Venice, Italy. (This is a paranormal thriller after all!)
Welcome everyone!
If you will all carefully disembark from the water taxi to the dock here, we will get started with the tour. This building before you is:
The Doge’s Palace
(photo credit: Andrew Balet) 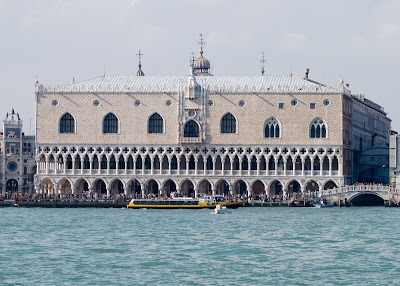 Built facing the sea to impress new arrivals with Venice’s strength and grandeur, it was an imposing piece of architecture in its day. You can see in its architectural influences from both sides of the Adriatic and on over to the Middle East. Keep in mind The Most Serene Republic once extended as far as Constantinople, Cypress, and beyond. This place seems to attract the power hungry… ANYWAY, if you’ll follow me up these stairs, we’ll head into:
The Sala Del Maggior Consiglio
(photo credit: Argenberg) 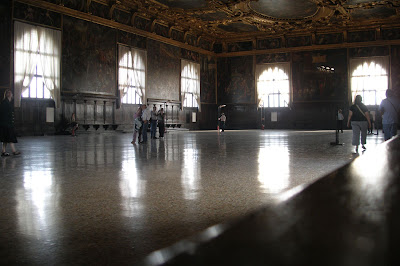 This was the Hall of the Great Council. I know this room looks massive, but at one point 1,600 legislators gathered in here. I have no idea how they could breathe! Anyway, the ceiling moldings contain portraits of most of the Doges of Venice. Technically, Doge means Duke, but the guy was the official monarch of the Republic. Of course, if the Council thought he was getting power happy…next!
Now’s about when we need to start picking up the pace. Head up these stairs right here and we’ll introduce you to:
The Leads
(photo credit: gegelaphoto) 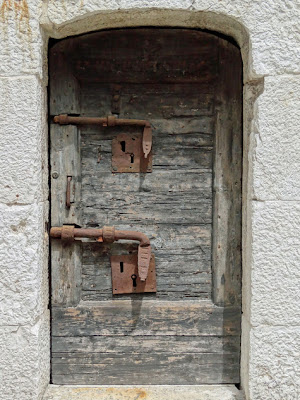 Feel that heat? That’s the lead roof. Nice and conductive, eh? Then you should really check it out in the middle of winter. My own private nightmare. So, here’s where Casanova hung out when the Republic finally got fed up with him. Sucks to be him? Oh, he got lucky. The other in-palace prison service was called The Wells. Yep, bottom floor. There you got flood waters, rats, bugs, and a nice little ledge to huddle on.
Alright, quickly now, down the stairs, across the Bridge of Sighs and into:
Prigioni Nuove
(photo credit: Giovanni Dall’Orto) 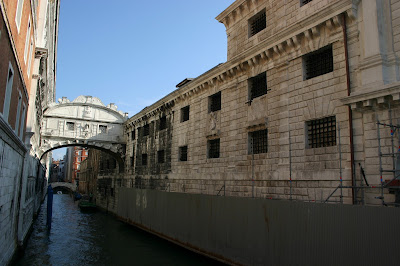 Yeah, that’s a nice name for New Prison. Let it not be said those aristocrats didn’t have a humanitarian side. Hey, at least those flea-bitten guys got out of the water…
Alright, here’s where we’re going to have to speed up to a run. It’s just a few blocks through buildings and over rooftops to:
Campo Santa Marina
(photo credit: Forrestn) 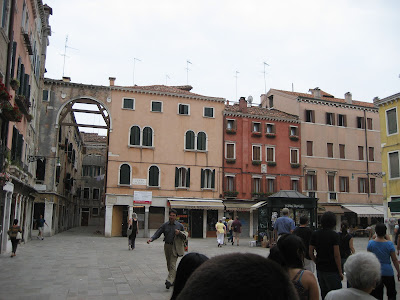 Take a break. Breathe for a second. My friend Anna has a grocery in that yellow sliver of building you see to the left there. We can stop and steal a sandwich.
Break time’s over, people. Move!
There, duck in there at the:
Palazzo Bragadin Carraba
(photo credit: Trip Advisor) 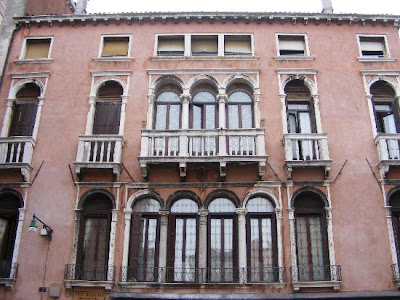 This is where Casanova’s good buddy lived. He even put Casanova up here for a little while, I think. Trick with palaces, when you divide them up between your kids, they either shrink down to smaller and smaller apartments, or you sell them as hotels, pocket the money and run.
Speaking of which, follow me this way to:
Teatro Malibran
(photo credit: Andreas Praefcke) 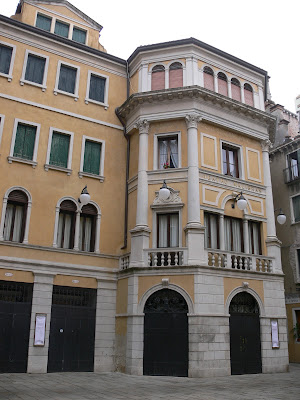 Rumor has it, this is where Marco Polo’s family originally had their home. Man travels all over kingdoms unknown, returns home and no one believes a word he says. Even his house gets a clever nickname: Ca’Million. House of a Million Lies. Ouch.
But lest our own adventure end prematurely, let’s scramble quickly up over the next rooftop to:
Church of San Giovanni Grisostamo
(photo credit: Didier Descouens) 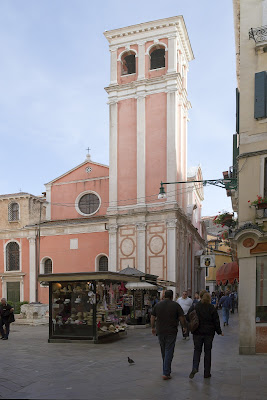 Good old St. John the Golden-Mouthed. The first church built on this site was erected over a thousand years ago. Blows the mind. So do some of the legends about the guy, but we’ll save that for another time. Right now we’re going to need more than his famous eloquence to get out of here alive.
Move, move, move!
And whatever you do don’t look back!
Yep, I know it’s on the other side of the lagoon, but if Lord Byron can do laps out here, then so can we. Yes, it’s the middle of the night. Are there sharks? Maybe. Just have to take our chances. We’ll talk more when we get to:
Le Zitelle
(photo credit: Lain99) 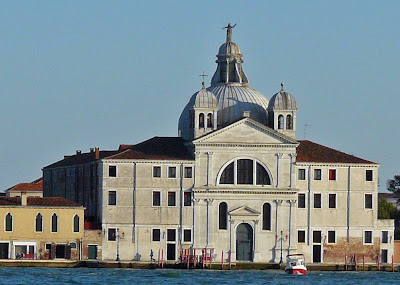 We made it! Okay, maybe we lost one or two back there, but most of us made it. This place? Ah, it used to be part of a complex that housed “young maidens” who had no dowry. Well, that’s the nice way to put it. Let’s just say that courtesans made good money back in the day and, well, Venice had a certain reputation for having the best in the business. The powers that be (and various parents) were none to tickled about this, so here’s where the girls ended up. Watch that old movie Dangerous Beauty sometime. You’ll get the idea.
So, here’s where the free tour ends. Sorry we didn’t get to see more of the city, but there are six more books in the series. I’m sure we’ll get the chance to see the rest in due time. Thanks for joining us. I’ll turn this back over to Tonya.
Yes, thanks for joining us on the Fugitive’s Tour! If you’d like a deeper (but not any slower) look at some of the places we’ve visited today, pick up a copy of paranormal thriller FACES IN THE WATER at Amazon or Barnes & Noble.
Thanks for letting us drop by and have an incredible day!
PS – I’ll be posting that little legend about St. John to my own blog at www.tonyamacalino.com. Enjoy! 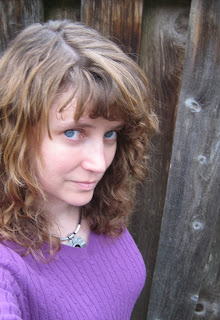 Tonya Macalino lives in Hillsboro, Oregon with her husband and two children. She is an avid collector of folklore and folk history, far too many to fit comfortably within the pages of any given book. When not working on her latest novel, she runs a handcrafted lotion, cosmetics, and bath company. To read more of the little gems she unearthed during her research, please visit her blog at www.tonyamacalino.com. 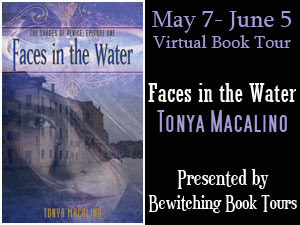 Follow the rest of Tonya’s Tour
Check out my review of Spectre of Intention Tonya’s debut novel
or my review of Faces in the Water!