Thanks to Cameo Rene for this guest post/book cover discussion! Make sure to get your FREE copy of In My Dreams

TODAY (2/15)!! You can read my 5/5 Review HERE!!
Guest Post:
Book cover discussion… your reactions, the making of, how you think it fits, etc.
In case you were wondering…Yes…I’ve recently changed the cover of In My Dreams.
Here they are side by side:
I’ve had a lot of great feedback from both of my covers, but with the old cover, people were questioning what the book was about. Some thought the story was about a werewolf… which it’s not… and I didn’t want the cover to give a false impression. The story does have a wolf in it, but it’s not a werewolf.  It’s… complicated. 😉
Both of the cover photos were purchased from Shutterstock, and yes, I actually put them together. The old cover was pretty simple and I didn’t have to do much. The new cover was a bit more involved and complex, and I had a more difficult time trying to portray exactly what I had in my head.
The original photo was very bright (in bright yellows and fall colors). I needed it to be dark, like Lizzy’s world. I wanted everything around her blurred and swirled, resembling not only what she was experiencing in her new life, but I also wanted it to capture her in one of her nightmares.
This is what the original photo looked like. 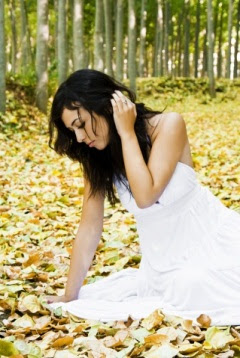 Overall, I’m totally satisfied with the new cover of In My Dreams, and think it fits the story much better. I posted it on my blog and Facebook to get people’s reactions, and they’ve been overwhelmingly positive. They agree that the new cover is better… and prettier.  Yay!
Thanks Melissa for letting me visit your awesome blog! It’s definitely a pleasure!
About the Author:

Cameo Renae lives in Maui, Hawaii with her husband and children. She loves reading great books that whisk her away from reality, even if for a little while.  🙂 Her interests are great love stories, anything paranormal, supernatural, magical, things with vampires, angels, mysteries, thrilling, suspenseful, and fantasy…(yes, unicorns, elves, dragons…etc)  🙂 Writing relaxes her, and her favorite genres to write for are YA and children. She recently completed In My Dreams, which is her debut novel, and is currently working on her new Paranormal Series. 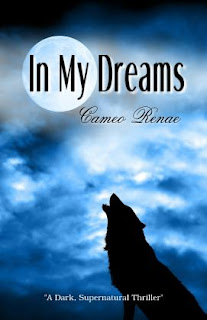 It was happening again. The dreams. The nightmares. It was something seventeen year-old Elizabeth “Lizzy” Hayes thought she’d outgrown; dreams that would come true; detailed premonitions of how people would die. This time she dreams about her boyfriend, Michael Young, and soon discovers that he’s been found… dead.
Michael hasn’t crossed over because he was murdered, and now his murderer is coming for Lizzy. His spirit won’t rest until she is safe, and as a newbie spirit, the easiest way for him to make contact is through Lizzy’s dreams. When she dreams, it’s as if he hasn’t died.
Lizzy must learn to pull on her inner strength to survive horrifying events. Meanwhile, in the spirit world, Michael learns everything he can about his supernatural gifts to help. But will it be enough to save her?