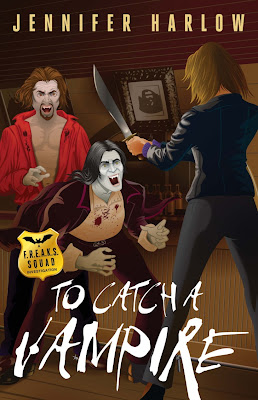 Beatrice Alexander, telekinetic special agent, is still adjusting to life among the F.R.E.A.K.S. while wiping out zombies and other supernatural threats. When Bea learns about her “special assignment” investigating a series of human disappearances with Oliver Montrose, her gorgeous but annoying vampire co-worker, she reluctantly agrees to go undercover.

Disguised as a married couple, they infiltrate the gothic vamp scene in Dallas. While sniffing out clues, Oliver’s convincing public—and not so public—displays of affection have Bea swooning in her bustier and fishnets.
Between contending with her fake husband’s ex-lover Marianna and feeling guilty for hiding the mission from her werewolf crush Will, Bea discovers she’s not the only F.R.E.A.K. keeping secrets. Clubbing with the undead turns bloody when Oliver’s old enemy, the Lord of Dallas, decides to seek his revenge. Caught in the crossfire, Bea is up to her neck in blood-sucking trouble.

Purchase:  To Catch a Vampire (A F.R.E.A.K.S. Squad Investigation)

Transcription of a Conversation with Special Agent Beatrice Alexander, F.R.E.A.K.
By Jennifer Harlow
NOTE: A few months ago I had the privilege of interviewing Special Agent Beatrice Alexander of the F.R.E.A.K.S. Squad for an article in Government Secrets Gazette, now defunct due to budget cuts. (The NASA gang and I say thanks from the unemployment line, Mr. President!)  Now, I’m forced to go freelance. I remained in e-mail contact with Agent Alexander in the interim and at my own expense flew back to Wichita in an attempt to uncover more information for future articles (or blackmail. Leaning towards blackmail.) We met at a Starbucks, and I secretly recorded the conversation. Here it as follows:
Jennifer Harlow (JH): Hi, girl! You look…um…
Beatrice Alexander (BA): Terrible. I know. Sorry I’m so late. I just came from a memorial service, and I’m exhausted. I’ve been…taking care of a sick friend for a few days.
JH: It never rains but it pours, huh? Who died?
BA: One of the Squad. We just got back from Dallas on an Op. It was, well  <chuckle> it’s been a tough week. A nightmare from start to finish. <More chuckling> God, I can’t believe I’m back here.
JH: Back where? Kansas?
BA: No, nothing. I just, exactly a week ago I met my brother in this very Starbucks right before the caca hit the fan.
JH: At least you got to see your brother.
BA: Yeah, no. It did not go well. I believe words like “monster” and “abomination” were uttered.
JH: Shit. Sorry.
BA: I expected it. We’re not exactly close.
JH: Still. If my brothers ever said those things to me, I’d kick them in the balls. Really I’ll find any reason to do that. Great cardio.
BA: I was tempted. Went the crying and vodka route instead.
JH: That works too. At least you had work to take your mind off it. You said you went to Dallas? Why?
BA: Vampires. A group of them killing people. Then it got really complicated.
JH: Ooh, complications. I love complications. Do tell.
BA: I don’t know if I should…
JH: <a pause> No, I understand. Government secrets and all. Security clearances, blah blah blah.
BA: Okay, okay. You’re right. I need someone to talk to about this. I’m going nuts. And I know I can trust you.
JH: Of course you can! Of course. Yeah. So, vampires. Dallas. Give me the skinny.
BA:
JH: Oh la la, a married couple with a beyond gorgeous man who has centuries of practical seduction experience. That sounds like fun. Hope you took advantage of it. And him.
BA: It wasn’t like that. <Note: she was blushing while she said this> We had a job to do. Lives at stake. It didn’t help we were staying in his ex-girlfriend’s house. His stunning ex-girlfriend by the way. Mariana.
JH: Bitch! I hate her for you already.
BA: Me too. And there were all these other vamps around who kept acting like they were lions and I was a flank steak. Then things got even worse. A house exploded, I got kidnapped. Again. The vampire ruler of Dallas took a murderous interest in us. I killed over a dozen vampires in twenty-four hours. Like I said, it’s been a heck of a week.
JH: Sounds like it. But he protected you, didn’t he? Oliver?
BA: Oh, yeah. In more ways than one.
JH:  So you’re not annoyed with him anymore?
BA: No, I am on an almost hourly basis but…I do see him in a certain light now.
JH: Hope it’s a naked light. Often.
BA: You are so smutty minded, Jen!
JH: One of my many charms, Bea. So, did you? Did Beatrice Do Oliver in Dallas? Get your freak on?
BA: I am not…continuing this line of discussion.
JH: Oh, you slut you, you so did. Muchos kudos, kiddo. So how is what’s his name, Will? How’s he handling your new “friends with benefits-ship” with the vampire?
BA: We are not…you really need to get your mind out of the gutter, Jen.
JH: But it’s so much fun in there. Beats the library where it normally is. <a beat> So? Spill. World War III time?
BA: Oh, Jen. It was so messed up from the start. He was away on his first vacation in years, and I couldn’t tell him I was going.  When he found out…it’s just so complicated. And it’s getting more and more complicated by the minute.
JH: Ah, the eternal dilemma: the good or bad boy. Poor you. Either way, you win, Bea.
BA: Or I lose them both.
JH: Only if your God is a cruel, dramatic bitch with a multi-book deal.
BA: What?
JH: What? I didn’t say anything. Crap. Listen babes, I’m so sorry, I gotta motor. My layover’s almost done. Long drive back to the airport. Have to catch a flight back to Virginia. I have to interview a witch in this small town, Goodnight. Mona McGregor? Ever hear of her? She’s like the most powerful witch in America or something. I’m doing this whole Occult/Magic set of stories. Can I e-mail you if I have any background questions?
BA: Of course.
JH: You are a doll as always. Can’t thank you enough for all you’ve done for me. Enjoy your vampire boy-toy! Kisses!
End of transcription 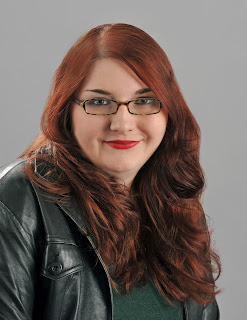 Jennifer Harlow spent her restless childhood fighting with her three brothers and scaring the heck out of herself with horror movies and books. She grew up to earn a degree at the University of Virginia which she put to use as a radio DJ, crisis hotline volunteer, bookseller, lab assistant, wedding coordinator, and government investigator. Currently she calls Northern Virginia home but that restless itch is ever present. In her free time she continues to scare the beejepers out of herself watching scary movies and opening her credit card bills.
Connect with Jennifer
Website
Blog
Facebook
Twitter
Pinterest
GoodReads

GIVEAWAY:
How would you like a copy of To Catch A Vampire for yourself?? Jennifer Harlow has generously offered three (3) of our readers tour wide a print copy! Just enter on the Rafflecopter entry form below! If you have any questions or concerns about the Rafflecopter form please leave a comment. Good Luck and Thanks for entering.

Check out the rest of Jennifer’s tour: 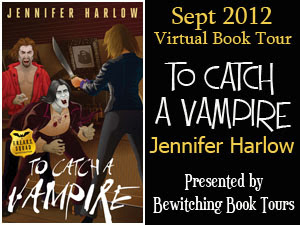 Disclosure: This Information and Giveaway was provided by the Author as a part of the Bewitching Book Tours. This is NOT a compensated post.
Kindle