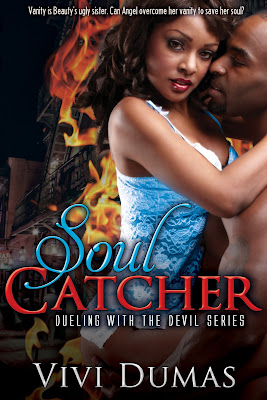 One of the top supermodels in the world, Angel, lives the life of the rich and fabulous, until a heinous car accident mars her face. After thirteen surgeries and losing everything she deemed important, she seeks out the dark forces to salvage her life. Angel decides to conjure the Devil for help, making a deal to recover her beauty. In exchange for his help, Lucifer forces her to hunt supernatural renegades, which have eluded the pits of Hell. In her quest to find beauty and get out of her contract with Lucifer, Angel stumbles upon love in the arms of a demon.

EXCERPT:
The growls and snarls inched closer. Angel’s feet pounded the dirt, kicking up red dust all around her. The barren trees provided little sanctuary. Her heart and mind raced as she tried to think of her next move. The skies darkened above, thunder rumbled through the thick clouds, and the air smelled of dampness.

How long had she been running? It seemed hours. Other than Noel, the other cadets were long gone ahead of her. Being human sucked when it came to supernatural warfare, but she refused to give up. Every day the class waited, watched, wondering when she was going to quit. Two of the others had already dropped out, and they were demons.

Noel passed Angel on the left, ducking through the low branches of the charred trees, cackling as he passed. Angel picked up her speed, her calves cramping and an ache developing in her side. She wanted to stop. Stopping meant quitting. Quitting was not an option. The hellish howls closed in on her.

Angel glanced over her shoulder and caught sight of one of the ugly beasts. Its long, rounded snout protruded from an enlarged head. Red eyes peered through the burnt trees, scanning the landscape. A ridge of ivory spikes ran down the monster’s back extending from each vertebra. The dog-like fiend pounded through the forest on powerful, muscular legs, which carried its compact body. Outrunning them wasn’t going to work. She had to come up with another plan. Surveying the terrain in front of her, the only place to go was up. The trees disappeared into the grey clouds. If she could climb high enough, maybe she could wait them out. Or maybe they would go find another victim.

She lunged for the closest branch, leveraged her foot on the tree trunk, and boosted herself off the ground. It took all her strength to hoist her weight into the tree. As she reached for the second branch, three hounds pounced on the trunk, clawing at her dangling foot. The dark-haired one’s razor sharp teeth nipped Angel’s ankle. Stretching for the next limb, she stared down just in time to see the dagger like claws of the reddish colored beast rip into her calf.

Scurrying up the tree, she climbed higher until she was out of reach of the animals. Angel perched on one of the higher limbs, praying it could hold her weight. She clung to the trunk and observed the creatures clawing the burnt bark off the tree. Slowly, deliberately, a hound dug its sharp claws into the wood, using them like spikes, and began to maneuver its way to her.

Tremors quivered through Angel’s body, almost causing her to lose her grip and fall. Thunder clapped and lightning flashed. Ominous clouds gathered overhead, growing darker as the hound drew nearer. The animal swiped at Angel’s bleeding leg, barely missing as she jerked it onto the branch she sat on. Electricity hummed in the air. Angel felt the energy gathering about her, a strange, eerie sensation floating on top of her skin.

The hound’s red eyes glowed as it stretched toward Angel, drooling from its mouth and snarling. Angel stood on the limb, grabbing for the one above her. As she pulled on the branch, it snapped in her hand. She wrapped her arms around the trunk to keep from falling. The beast snagged her ankle, jerking its head, trying to yank her from her perch. Lightning flashed through the sky, hitting its target—Angel.

Angel closed her eyes as the pain she expected never came. Her body absorbed the energy and channeled it to the beast attached to her ankle. The smell of burning fur wafted to Angel’s nostrils. The hound fell to the ground with a thud. The two other monsters sniffed its cohort and growled up at her. Angel redirected the remaining energy to the creatures below with deadly accuracy. 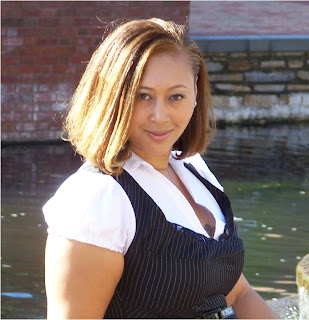 ABOUT THE AUTHOR:
Vivi Dumas submerges herself in the dark underworld of the supernatural. To balance the analytical and logical confines of her day job, she unleashes the fiery passions of her imagination in her writing. Although she grew up an Army brat, she calls Louisiana home, but has endured the hot summers and cold winters of Maryland for the last 16 years.

GIVEAWAY:
How would you like an e-copy of Soul Catcher for yourself?? Vivi Dumas has generously offered one (1) of our readers an e-copy for themselves. Just enter on the Rafflecopter entry form below! If you have any questions or concerns please leave a comment. Good Luck and Thanks for entering. 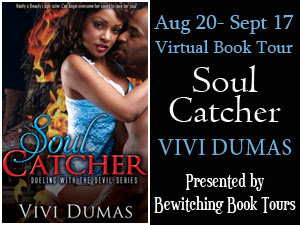 Disclosure: This Excerpt and Giveaway was provided by the Author as a part of the Bewitching Book Tours. This is NOT a compensated post.