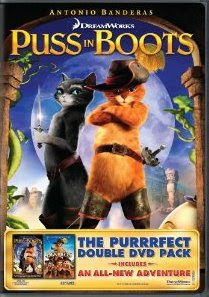 The Puss In Boots Double DVD Pack includes bonus features that are the cat’s meow:

DreamWorks Animation’s PUSS IN BOOTS Synopsis
You loved him in Shrek…now see where the one-and-only swashbuckling feline found his fame – and a very big pair of boots – in the “hilariously funny” (Associated Press) animated epic! Lover, fighter and outlaw Puss In Boots (Antonio Banderas) is off on the adventure of his nine lives as he teams up with Kitty Softpaws (Salma Hayek) and Humpty Dumpty (Zach Galifianakis) for the ultimate showdown with the notorious Jack and Jill (Billy Bob Thornton and Amy Sedaris). Here’s the true story of The Cat, The Myth, The Legend – Puss In Boots!

Disc 2:
Puss In Boots: The Three Diablos— Puss’ all-new adventure.
Additional bonus features:
• Kitten to Cat: The Progression of Puss In Boots—Interviews with the cast and creators of the Shrek and Puss In Boots films reveal the design challenges and personal growth moments for everyone’s favorite cat.
• Glitter Box Dance Off!—Learn all of Puss’ signature moves, including the ever-popular “Litter Box!”
• Klepto Kitty—Meet Kitty Softpaws’ real-life counterpart, Dusty, the Klepto Kitty, who has stolen more than 600 items from his neighborhood in San Mateo, California.
• Kitty Keyboard—Create your own music with the kitty keyboard, where each key produces a different “meow.”
• Fairytale Pop-Up Book—Discover memorable moments, favorite quotes, wanted posters and backstories for all the characters featured in Puss In Boots.
• Kitty Strikes Again—Spot the differences before the “egg timer” runs out when Kitty Softpaws swipes items from images.
• Golden (Easter) Egg
• CATivities (DVD-ROM)
o Printables

DreamWorks Animation’s PUSS IN BOOTS: THE THREE DIABLOS Synopsis
As the dust from his latest adventure begins to settle, Puss In Boots finds himself at a crossroads between two destinies – hero and outlaw. When a desperate princess hires Puss to recover her stolen ruby, he is reluctantly partnered with three little kittens. Adorable. Fuzzy. Deadly. The minute the mittens are off,
The Three Diablos wreak havoc on Puss’ mission to recover the stolen ruby from the notorious French thief, “Le Chuchoteur The Whisperer.” Can Puss tame these three little devils in time? 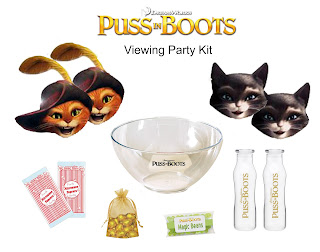 MY THOUGHTS:
This is such a cute family movie! My little one loves movies with Cats in it and this was no exception. We have an Orange Tabby, so she would yell at the TV “that looks like Kylan”!! She laughed and giggled at Puss’s antics! I enjoyed watching this with her and hearing her laugh! As with Shrek there is adult humor (that little would not get) and some fight scenes but I will let my 2 year old watch this over and over again (as she already request)! We definitely recommend this movie to others!We plan on hosting a viewing party soon for a group of Alex’s friends, this is what they are going to enjoy… 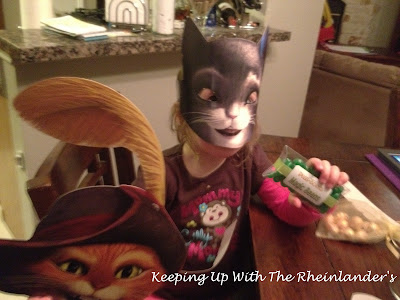 Disclosure: I was given the opportunity to review Puss In Boots Double Pack. I received this movie and a viewing kit  for review purposes only. I was not compensated to write a positive or favorable review. This is Keeping Up With The Rheinlander’s personal opinion.
Kindle
Print
Audio Book
Apple eBook