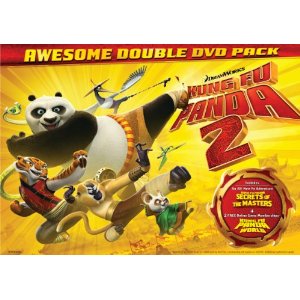 Kung Fu Panda 2 & Secrets of the Masters
Language: English
Subtitles: English, French, Spanish
Number of discs: 2
Rated: PG & NR (Not Rated)
Studio: Paramount
ASIN: B0057IS6K6
Kung Fu Panda 2
New! Jack Black is back as Po in DreamWorks Animation’s Kung Fu Panda 2, the hilarious and action-packed “winning sequel” (Scott Bowles, USA TODAY) to the Academy Award®-nominated original film. In Kung Fu Panda 2, Po and the Furious Five set off on his first big challenge since becoming the Dragon Warrior. When his new evil nemesis has taken down the legendary three kung fu masters, Po is the only one left who can save China, save kung fu, and save the bunnies! You’ll laugh out loud as you watch Po try to find his way, and be on the edge of your seat as he fights the most epic kung fu battle ever.

MY THOUGHTS:
When I received the movie my brother was over and immediately confiscated it to watch and review for himself. He reported back that it is as hilarious as the the first one!! My little monkey and I watched it and would have to agree!! Jack Black is just plain funny, especially as a cute Panda named Po! If you enjoyed the first one then you will definitely enjoy the sequel. We recommend this to others and give it two thumbs up for being funny and action packed cuteness!!

Disclosure: I was given the opportunity to review Kung Fu Panda 2/The Secrets of the Masters. I received this movie  for review purposes only. I was not compensated to write a positive or favorable review. This is Keeping Up With The Rheinlander’s personal opinion.
Kindle
Print
Audio Book
Apple eBook