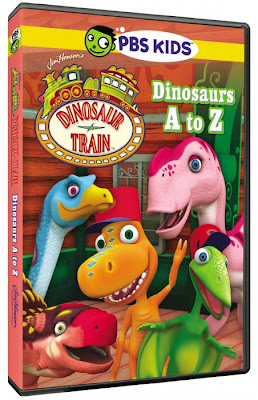 Dinosaur Train
Dinosaurs A to Z
Format: Animated, Color, Widescreen, NTSC
Language: English
Subtitles: English
Number of discs: 1
Rated: NR (Not Rated)
Studio: Pbs Paramount
DVD Release Date: October 2, 2012
Run Time: 110 minutes
SRP: $12.99 U.S.; $13.99 Canada
ASIN: B008KEQMFA
Synopsis:
The Dinosaur Train is filled with its most fascinating passengers yet as it makes new and exciting stops in DINOSAUR TRAIN: DINOSAURS A TO Z.  Join Buddy and his family as they embark on a musical tour where they learn about fantastic dinosaur species that Buddy never knew existed.  From the singing Corythosaurus to the speedy Ornithomimus, this is one train no one will want to miss!  From the world-renowned Jim Henson Company, PBS KIDS and Paramount Home Media Distribution, the DINOSAUR TRAIN: DINOSAURS A TO Z DVD features nine exciting dino-filled adventures including a bonus holiday episode titled “Solstice Time” and loads of special features including Dr. Scott video segments, interactive games, coloring pages, information for parents and more.

Dinosaur Train embraces and celebrates the fascination that preschoolers have with both dinosaurs and trains while encouraging basic scientific thinking and skills as the audience learns about natural science, natural history and paleontology.  Over 13 million households tune in to watch “Dinosaur Train” each month.  The “Dinosaur Train” television series is an Emmy®-nominated and Parent’s Choice Silver Honor series.  “Dinosaur Train” consistently ranks among the top ten children’s programs among kids ages 2 to 5*.

Disclosure:  I received the above mentioned item  for review purposes only. I was not compensated to write a positive or favorable review. This is Keeping Up With The Rheinlander’s personal opinion