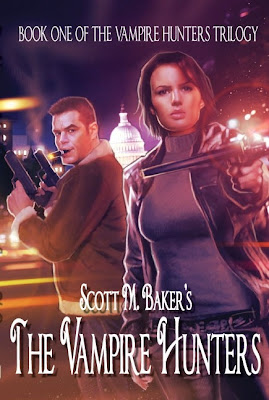 The Vampire Hunter’s
The Vampire Hunter’s Trilogy Book One
Author: Scott M. Baker
Source: Innovative Online Tours
File Size: 356 KB
Print Length: 248 pages
Publisher: Pill Hill Press (August 27, 2011)
Language: English
ASIN: B005JPSQVQ
Summary:
As former Boston cops, Drake Matthews and Alison Monroe thought they had experienced it all… until they found themselves tracking down a serial killer who turned out to be one of the undead. Stopping him cost them their careers and almost their lives. Thanks to an influential and anonymous benefactor, Drake and Alison find a new job ridding the streets of Washington D.C. of the vampiric threat terrorizing the nation’s capital.
Only this time, Drake and Alison are not facing a single vampire but an entire nest led by Ion Zielenska, one of history’s most evil and twisted masters. As the vampires indiscriminately prey on humans, seeing them as nothing more than food to satiate their hunger, they create a wave of violence that threatens to engulf the city. Orchestrating the carnage is Antoinette Varela, the mistress of the nest,who realizes that for the nest to survive the hunters must be eliminated. However, when her vendetta turns personal, the hunters find themselves in struggle they are not prepared for. 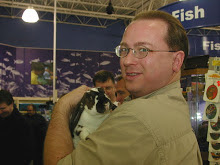 ABOUT THE AUTHOR:
Born and raised in Everett, Massachusetts (just outside of Boston), Scott M. Baker has spent the last twenty-two years living in northern Virginia. He has authored several short stories, including “Dead Water”, “Rednecks Shouldn’t Play with Dead Things”, “Cruise of the Living Dead”, “Deck the Malls with Bowels of Holly” (an alcoholic mall Santa battles zombie reindeer), and “Denizens.” His two latest short stories – “The Last Flight of The Bismarck,” about steampunk zombies, and “The Hunger,” a tale of cannibalism during a zombie outbreak – will both be released later this year in anthologies being published by Knighwatch Press.

Scott’s first zombie novel, Rotter World, which details the struggle between humans and vampires during a zombie apocalypse, was released by Permuted Press in April 2012. He has also authored The Vampire Hunters trilogy, which has been published by Pill Hill Press and received excellent reviews from Famous Monsters of Filmland and Fangoria, among others. Scott has finished his fifth novel, Yeitso, a homage to the monster movies of the 1950s set in northern New Mexico, which is currently with a publisher, and is wrapping up his sixth novel, Hell Gates, the first in a series of young adult novels set in a world in which the realms of Hell and earth have merged.

When he is not busy writing, Scott can either be found relaxing on his back deck with a cup of iced coffee, or doting on the four house rabbits that live with him.

Connect with Scott
Website
MY THOUGHTS:
A very action packed horror read. Baker does a great job of creating a world full of scary vampires- monsters that need to be eliminated. The characters are well rounded and full of life so to speak. The storyline is captivating and one you start to read you won’t want to stop!! I look forward to the next to books in this series and other books by Scott M. Baker. I definitely recommend checking this series out.
MY RATING:
♥♥♥♥ 4/5 Hearts: Great Read
Follow the rest of Scott’s tour: 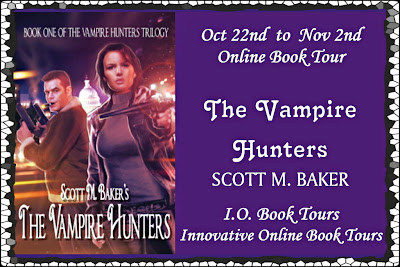