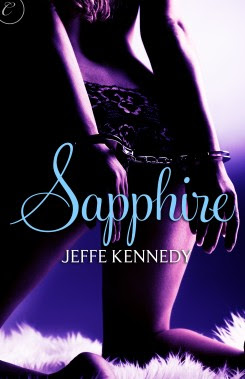 Summary:
A successful executive, M. Taylor Hamilton is on track with her ten-year plan. Too bad her personal life consists of hitting the gym and grocery shopping. Enter the seductive Adam Kirliss. They may have a working relationship, but everything changes at an office party when he handcuffs her to the rail of a yacht. Taylor writes the adventure off as too much champagne, but when Adam challenges her to a date, she agrees to meet up with him. And follow his rules. They share a night of exquisite intimacy, brimming with both pain and pleasure. But afterwards, fearful of losing her heart, Taylor pulls back emotionally. Adam is determined to prove that she longs for the loss of control he can give her – and the passionate release it provides. How can he make her see that he wants her, and not just her body?

About the Author:
Jeffe (pronounced Jeff- ee) took the crooked road to writing, stopping off at neurobiology, religious studies and environmental consulting before her creative writing began appearing in places like Redbook, Puerto del Sol, Wyoming Wildlife, Under the Sun and Aeon. She has been a Ucross Foundation Fellow (2001), was a Wyoming Arts Council roster artist, when she lived in Wyoming, and received the state’s 2005 Frank Nelson Doubleday Memorial Award for a woman writer of exceptional talent in any creative writing genre and the 2007 Fellowship for Poetry. Jeffe has contributed to several anthologies, Drive: Women’s True Stories of the Open Road. (2002), Hard Ground (2003), Bombshells (2007) and Going Green (2009). Her first book, Wyoming Trucks, True Love and the Weather Channel was published by University of New Mexico Press in 2004. An erotic novella, Petals and Thorns, came out under her pen name of Jennifer Paris in 2010, heralding yet another branch of her path, into erotica and romantic fantasy fiction. Jeffe lives in Santa Fe, with two Maine coon cats, a border collie, plentiful free-range lizards and frequently serves as a guinea pig for an acupuncturist-in-training.
Who Is Jennifer Paris?
I was doing the “Jeffe Kennedy writing as Jennifer Paris” thing, but Angela James, my editor at Carina, said no, no, no. Since I really don’t want to “flesh out” Jennifer Paris and tweet or blog as her (she was only a cardboard cut-out anyway), I decided to retire her. However, I have one book “Petals and Thorns” that is by Jennifer Paris.


MY RATING:
♥♥♥♥  4/5 Hearts: Great Read
Disclosure: I received a copy of the book for review purposes only from NetGalley through Bewitching Book Tours. I was not compensated to write a positive or favorable review. This is Keeping Up With The Rheinlander’s personal opinion.
Kindle
Print
Audio Book
Apple eBook