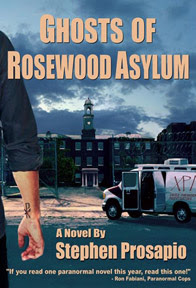 Ghost of Rosewood Asylum
Xavier Paranormal Investigators
Author: Stephen Prosapio
File Size: 518 KB
Print Length: 294 pages
Publisher: Noble Publishing; Second Edition edition (July 12, 2012)
Language: English
ISBN-10: 1936593106
ISBN-13: 978-1936593101
ASIN: B008KWVPZO
Synopsis:
Zach Kalusky, host of Sci-D TV’s Xavier Paranormal Investigators, is ecstatic when he’s given the opportunity to explore the most haunted site in Chicago for a Halloween Special: Rosewood Asylum, a place long made off-limits by the local government, plagued by decades of mysterious fires and unexplained events. It’s Zach’s dream investigation- but there’s a catch: the network forces Xavier Paranormal Investigators to partner with the more dramatic-but less ethical-Demon Hunters. Now, Zach must fight for both his show’s integrity and his team’s loyalty while trying to protect his own secret: that he, himself, is possessed. ABOUT THE AUTHOR:
Stephen Prosapio was born in Louisville, Kentucky and grew up in Chicago. He received his Bachelors of Arts degree in Political Science from DePaul University.

After reporting for one of the nation’s largest fantasy football websites, footballguys.com, Stephen wrote his first novel, Dream War. Competing against 2,676 other novels, it won a Top Five Finalist award in Gather.com’s 2007 First Chapters contest. Dream War was released as an eBook in July of 2010. Articles about him and his writing have been featured in the San Diego Union Tribune, The North County Times, Today’s Local News, San Diego Magazine and the DePaul University Alumni magazine.

Stephen’s second novel Ghosts of Rosewood Asylum is a paranormal suspense novel about a paranormal researcher–who is himself possessed–forced to team with a rival TV ghost hunting show investigating a 19th century asylum. He uncovers as many dangerous secrets as he does spirits.

Stephen resides in Oceanside, California. He is currently crafting a sequel to Ghosts of Rosewood Asylum that chronicles the Xavier Paranormal Investigators next case.

MY THOUGHTS:
I really enjoyed this book! I am a fan of paranormal research and ghost shows. I have had numerous real life encounters with the paranormal and am a BELIEVER!! So reading this book had an extra twist for me! Prosapio does a wonderful job of creating a story that flows, gives you the “willies“, is full of action, and keeps you wanting more.  The characters each bring a unique aspect to the storyline! I definitely suggest reading this start to the XPI series, especially if you are are a fan of the paranormal investigations!

MY RATING:
♥ ♥ ♥ ♥4/5 Hearts: Great Read
Disclosure: I received one copy of the book from the Author for review purposes only. I was not compensated to write a positive or favorable review. This is Keeping Up With The Rheinlander’s personal opinion.
Kindle
Print
Audio Book
Apple eBook