File Size: 422 KB
Print Length: 336 pages
Publisher: Thomas Nelson (May 1, 2012)
Language: English
ASIN: B0078FAAEQ
Synopsis:
“You probably want to hear about Jennifer and the demons and how I played chicken with a freight train and-oh yeah-the weird murder . . . you’re definitely going to want to hear about that.”
Sam Hopkins is a good kid who has fallen in with a bad crowd. Hanging around with car thieves and thugs, Sam knows it’s only a matter of time before he makes one bad decision too many and gets into real trouble.
But one day, Sam sees them harassing an eccentric schoolmate of his named Jennifer. When Sam finds the courage to face the bullies down, he loses a bad set of friends and acquires a very strange new one.

Because Jennifer is not just eccentric. To Sam, she seems downright crazy. She has terrifying hallucinations involving demons and the devil and death. And here’s the really crazy part: Sam is beginning to suspect that these visions may actually be prophecies–prophecies of something terrible that’s going to happen very soon. Unless he can stop it.

With no one to believe him, with no one to help him, Sam is now all alone in a race against time. Finding the truth before disaster strikes is going to be both crazy and very, very dangerous. 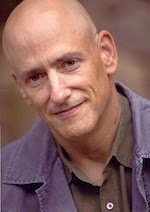 Andrew Klavan was hailed by Stephen King as “the most original novelist of crime and suspense since Cornell Woolrich.” He is the recipient of two Edgar Awards and the author of such bestsellers as True Crime and Don’t Say a Word.
His books and screenplays have been turned into films directed by Clint Eastwood and starring Michael Douglas, Ed Burns, Michael Caine among others.
Hometown: Santa Barbara, California
Books Sold to Date: over 1.5 million.
For more about Andrew and his books for young adults, visit him at the Adventure Page on Facebook.
MY THOUGHTS:
This was a very interesting, intriguing read. The beginning starts out slow but gets going and doesn’t stop till the last word. Very funny and witty at times, also suspenseful and thrilling too. The characters, especially Sam are real and relate-able. Klavan has a great writing style and I am looking forward to reading more from this author. I would definitely recommend this book to others.
MY RATING:
♥ ♥ ♥ ♥ 4/5 Hearts: Great Read
Follow the rest of Andrew’s Tour
Disclosure: I received a copy of the book through Litfuse Publicity Group. I was not compensated to write a positive or favorable review. This is Keeping Up With The Rheinlander’s personal opinion.
Kindle