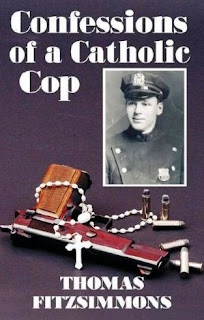 Ten-year police veteran Michael Beckett has policing in his blood and knows no other life. Until by chance he lands a small role on Law & Order, and decides he can start a new life in front of the camera. But when the neighborhood of a young, hot Law & Order scriptwriter Solana Ortiz becomes the target of a string of arsons, Beckett uncovers a scheme that reaches into the deepest pockets of power and greed in New York City, and into the path of an old friend that Beckett will do almost anything to forget . . .
About the Author:

Thomas Fitzsimmons didn’t need to hire a team of researchers to write gritty crime stories. For Fitzsimmons, it was as simple as recalling his life.Fitzsimmons was raised in a family of career cops in an Irish neighborhood in the Bronx, New York. After serving in the U.S. Navy, Fitzsimmons joined the New York City Police Department. During his 10-year career in the South Bronx precinct dramatized in Paul Newman’s “Fort Apache-The Bronx,” Fitzsimmons notched numerous arrests, collaring armed robbers, drug kingpins, and arsonists. Currently, Fitzsimmons is a top security consultant to celebrity clients nationwide. A recognized security expert, he has appeared on television shows including “Good Morning America,” “Geraldo Rivera” and “Montel Williams.”

MY THOUGHTS:
This is definitely a great read! Gritty and dirty with a few surprises!! I will say that I am not a fan of the cover but as they say don’t judge a book by it’s cover!! Fitzsimmons definitely took a page out of an episode of SVU ~ comparison will be relevant once you read the book!  Plus SVU happens to be a favorite show of mine. Beckett is a great lead character with his perfect flaws and integrity, it makes for a great cop! The ending definitely leaves you with questions where a second book could answer them. So maybe Fitsimmons will make this into a series and write more books with these characters. I definitely would recommend this book to others and buy as a gift for someone! I look forward to reading other books by Thomas J Fitzsimmons.
MY RATING:
♥ ♥ ♥ ♥ 4/5 Hearts: Really Great Read
Disclosure: I received one copy of the book from the Author for review purposes only. I was not compensated to write a positive or favorable review. This is Keeping Up With The Rheinlander’s personal opinion.