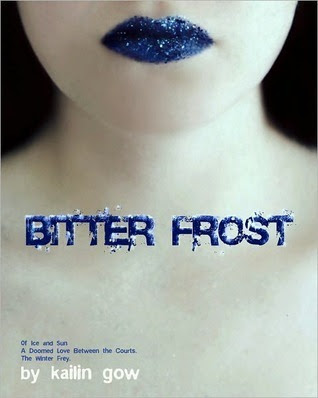 Bitter Frost
Frost Series Book 1
Bonus Book 1 ~ The Wolf Fey
Author: Kailin Gow
File Size: 252 KB
Print Length: 242 pages
Publisher: theEDGEbooks.com
(September 11, 2011)
Language: English
ISBN-10: 1597488984
ISBN-13: 978-1597488983
ASIN: B0041HXP2S
Synopsis:
All her life, Breena had always dreamed about fairies as though she lived among them…beautiful fairies living among mortals and living in Feyland. In her dreams, he was always there the breathtakingly handsome but dangerous Winter Prince, Kian, who is her intended. When Breena turns sixteen, she begins seeing fairies and other creatures mortals don t see. Her best friend Logan, suddenly acts very protective. Then she sees Kian, who seems intent on finding her and carrying her off to Feyland. That’s fine and all, but for the fact that humans rarely survive a trip to Feyland, a kiss from a fairy generally means death to the human unless that human has fairy blood in them or is very strong, and although Kian seemed to be her intended, he seems to hate her and wants her dead.
This edgy tale about beautiful and dangerous fairies, based on Dutch lore, will leave you breathless… 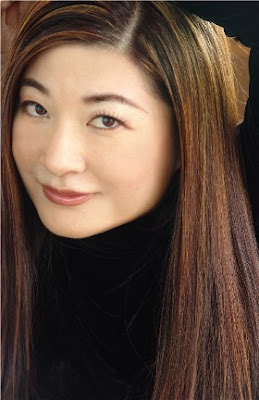 Kailin Gow has appeared on top national syndicated talk shows such as ABC Radio, Barbara Dooley show, Chat with Women on KKNW Seattle, Broadminded on Sirius Radio XM, and more as a leading authority on YA and women’s issues including self-esteem, body image, dating and sexual relationships, abuse, and bullying. Kailin has been a published author for over 10 years with over 100 titles published under her name and under pen names.

She is the founder of the community social site, The Saving You Saving Me Project,http://www.savingyousavingme.com which helps teens, young adults, and women deal with social issues like sexual abuse, self-esteem, body image, bullying, cutting, relationships, and more in a positive community environment. The Saving You Saving Me Project is an extention of her YA-mature fiction Saving You Saving Me.
Kailin Gow began writing books for tween girls to help them with self-confidence and self-esteem. Her book, Gifted Girls Activities Guide to 365 Days of the Week, became a reference book used in girls organizations across the U.S. As her tween fans grew to become teens and young adults, Kailin began writing engaging and entertaining young adult book series for them. The results are book series like the Frost Series, PULSE Series, Wicked Woods Series, Stoker Sisters, Phantom Diaries, The Fire Wars, FADE, DESIRE, and more.

All her books are inspired by personal experiences. Saving You Saving Me was inspired by her experience as a peer counselor for young women during college and from her psychology major college roommate’s experience being in a relationship similar to the one portrayed by Sam and Collins in the book. Loving Summer was inspired by Kailin’s experience growing up with a family consisting of a mother, two sons, and a daughter who went through a similar experience of tragedy in the book. Aunt Sookie is based on herself and some actor friends she knows. The Frost Series, Circus of Curiosities Series, and FADE Series came about through vivid dreams. Never Say Never was inspired by Kailin’s experience as a radio host and working with and interviewing bands, as well as having college friends who were in bands. Kailin also played the drums and keyboard for a band she once started. A classically-trained musician, she was once led her school orchestra, playing first chair violin. Her experience in the music world and her love of Phantom of the Opera, inspired the Phantom Diaries. PULSE was inspired when Kailin was in the hospital suffering from heavy blood loss post surgery and needed several bags of blood to survive (like a vampire). Beautiful Beings was inspired by her college encounter with a young demon exorcist. A pastor once told her she had the gift of sight and that she was destined to become a prolific author, many times over.

She began taking her writing seriously when her daughter was diagnosed as being on the spectrum and her mother was fighting three types of cancer. Four years later, her daughter was no longer on the spectrum, and her mother became cancer free. Kailin believes in hope and miracles, after having been through several struggles and experiences herself. This is why she writes.

When not busy inhaling chocolate and drinking coffee by the gallon, Kailin makes time for writing fantasy books, blogging as an expert blogger for Fast Company, volunteering as an Emergency Responder and volunteering for battered women’s shelters. For fun, she plays the electric violin, and puts together a music playlist for her radio and web shows.
Her Frost Series consisting of the Bitter Frost Series, The Wolf Fey Series, and the Fairy Rose Chronicles along with her other book series are being developed into worldwide MMORPG Games by SEE GLOBAL ENTERTAINMENT, which is the world’s leading game developer known for developing the top blockbuster films into games.
Connect with Kailin
Website
Facebook
Pinterest
Twitter
GoodReads
MY THOUGHTS:
LOVED this book!! This is my first Kailin Gow book but definitely will not be my last!! I read this book within one day (and with a toddler around you know how hard that is!!) but I could not put it down. The story line is unique and draws you in. You quickly become engaged and route for the characters as they develop. I definitely recommend this series to others and cannot wait to read more by Kailin Gow!!!
MY RATING:
♥♥♥♥♥ 5/5 Hearts: Outstanding
Follow the rest of Kailin’s Tour 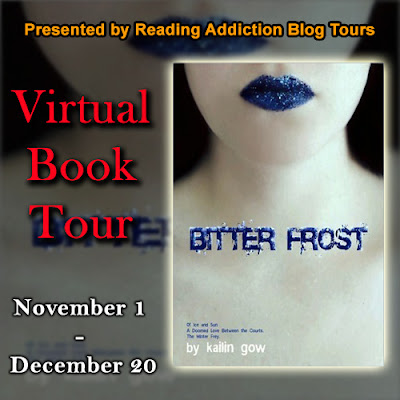 Disclosure: I received a copy of the book for review purposes only. I was not compensated to write a positive or favorable review. This is Keeping Up With The Rheinlander’s personal opinion.