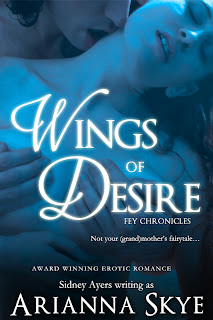 Summary:
Not your (grand)mother’s fairytale…
Rhiannon Kinsley’s life goes from boring to downright crazy when a freak lightning bolt strikes her laptop. To make matters even more bizarre, strange words and symbols flash across the computer screen and she hears a mysterious voice. Time to call the men in white coats! Then Cerne Silverwing, an intriguingly sexy man, appears. He insists she’s a faerie princess whose fate will determine his own. What a crock! Now she knows who really needs those white coats.
With the Dark Faerie forces threatening his kingdom, Cerne kidnaps Rhiannon and brings her to Fey, a land where magic knows no bounds. He’s performing a duty to save his kingdom and nothing more—a duty that will bring him his wings and the strengthened magic that comes with them. If he doesn’t unite with the princess as her consort, those wings will never grow. But this princess grew up in the land of laptops and instant messages, and she’s convinced they’re both crazy. Despite their differences, the two are thrust together to defeat the whip-wielding Dark Faerie Queen before she takes over the kingdom. Passion and peril aside, will Rhiannon and Cerne discover their true destiny?
EXCERPT:
Cerne caught her hand in his and gave her a heated gaze. “I didn’t want to resort to this,” he said, his voice thick and heady. “But I’ve run out of options.” He pulled her against his hard-muscled body. With his thumb and forefinger, he lifted her chin.
Clenching her fists, she bit her lip. Tingling numbness filled her every pore. She attempted to pull herself from his embrace, but her body wouldn’t cooperate.
“Let me go! You’re frightening me.”
“It’s for your own good and the good of your people, my sweet.” He traced a finger lightly over her lips. “Soon you’ll understand.” He lowered his lips to hers and gently nibbled. Coaxing her mouth open, his tongue swirled with hungry strokes along hers.
She moaned softly as her traitorous tongue danced with his. Lessening his grip on her arm, he allowed her to press closer and rub her bikini-clad breasts against the hard ridges of his chest. Her nipples pebbled against the spandex of her swim top.
Stupid nipples.
She twisted her fingers in his dark mane, pulling him closer. Heedless of what she knew was right, she intensified the kiss. He hoisted her up onto his lap, letting her straddle the rock-hard erection that filled his trousers. Grinding her hips against his, she reached down to unfasten and untie the garment.
He pulled her hands away. “No, leannan. I just want to kiss. The joining must occur at Beltane—in Fey.”
“I’m not going to Fey—”
He reclaimed her lips. Intoxicating warmth spread throughout her body while he licked, sucked and nibbled. She gasped in pleasure and let his tongue probe the cavern of her mouth again. Light as a feather, she sighed in deep contentment. By God, was she floating? Closing her eyes, Rhiannon allowed him have his way with her.
“I’m sorry,” he breathed against her lips. “It was the only way.”
“What—” Her eyes flickered as spots danced before them until darkness took over.

A native of Michigan, Arianna still lives in the same town she grew up in. No matter how hard she tries, she just can’t seem to get away. Michigan is in her blood, and she wouldn’t have it any other way. 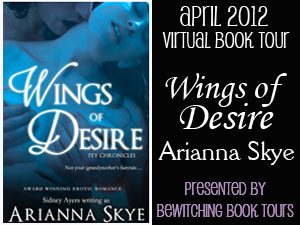