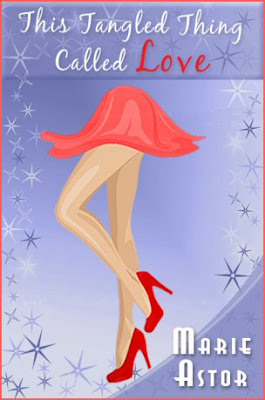 This Tangled Thing Called Love
Author: Marie Astor
File Size: 439 KB
Print Length: 254 pages
Language: English
ASIN: B0078IPNCW
Synopsis:
Claire Chatfield has everything a girl could possibly wish for: looks, a promising career, and an engagement ring from one of New York’s most eligible heir-bachelors! Life should be a dream and yet, it does not feel like one… When an enigmatic new neighbor, Alec Brunell, moves into an apartment above from Claire’s, Claire is surprised to find herself wondering whether the choices she has made in her life are worth following through.
In order to secure his place as his father’s successor, David Lawson must settle down with a wife befitting the future head of Lawson Enterprises – and who could fit the prerequisite better than the stunningly beautiful and incredibly bright Claire Chatfield? There is just one glitch – David Lawson is in love with another woman.
A successful tango instructor, Alec Brunell, has never lacked for women’s attention, but he finds himself at a loss when faced with his downstairs neighbor, Claire Chatfield. Upon hearing of his occupation, most women swoon with desire, but Claire runs for the door. Still, her iciness only adds fuel to his fire, as Alec is determined to change Claire’s view of him.
This Tangled Thing Called Love is about finding one’s perfect match – sometimes following one’s heart is as convoluted as learning the steps of tango.

EXCERPT (16):
Alec opened the door of his apartment and carefully placed the bundled package from the art gallery onto the floor. His new digs were shaping up quite nicely: the red wall he repainted added just the right amount of dramatic flair he had been hoping for, and the newly washed parquet floors sparkled. The art deco tango poster he had asked the gallery owner to track down for him would be the final touch. Alec shook his head, remembering his botched attempt at painting – sure, he could slather paint with a roller all day long, but to think that he could actually paint had been overconfident. His attempt to draw a silhouette of a tango couple had turned into a complete fiasco and he had to repaint the red wall. Well, now it was finally dry and ready for the poster to be hung up.
Alec reached for his tool kit, searching for the hook strong enough to hold up the poster’s weighty frame – the frame had cost almost as much as the poster did, but it was well worth it. As he plunged the drill bit into the wall, Alec felt his frustration ebbing – there was no point in sulking. So, Claire had a boyfriend – there were plenty of fish in the sea, and he had never found himself wanting in the women’s department. And yet, the thought of his downstairs neighbor with another man made his mouth turn sour with jealousy. Alec’s competitive streak had always been strong, but it was more than that. Granted, he had only seen Claire for a handful of moments, and she was snapping at him during the majority of them, but for some perverse reason, her irate demeanor only seemed to fuel his interest in her – perhaps, he was a closet masochist. He had never shied away from a challenge, but presently, he had to admit that he had struck out on this one.

ABOUT THE AUTHOR:
Marie Astor is a die-hard romantic who wholeheartedly believes in true love, which is why she writes in the contemporary romance genre. Marie is the author of contemporary romance novels This Tangled Thing Called Love, Lucky Charm, On the Rim of Love, and a short story collection, A Dress in a Window.
Connect with Marie
Website
Facebook
Twitter
GoodReads
Follow the rest of Marie’s Tour 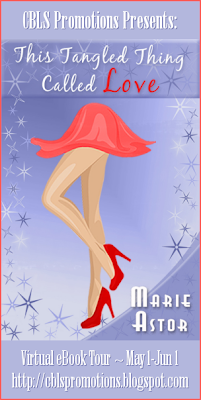 Disclosure: This excerpt was provided by the author through CBLS Promotions. This is NOT a compensated post.
Kindle