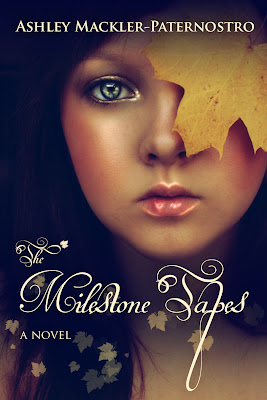 The Milestone Tapes
Author: Ashley Mackler-Paternostro
File Size: 473 KB
Print Length: 259 pages
Language: English
ASIN: B007JQ3U5A
Synopsis:
Jenna Chamberland never wanted anything more than to be a wife and mother. That is, until she realized that her life was ending after a three-year battle against breast cancer. Now, all she really wants is more time.
With 4,320 hours left to live, Jenna worries for her loved ones and what she knows awaits them on the other side: Gabe will have to make the slip from husband to widower, left alone to raise their seven-year-old daughter; Mia will be forced to cope with life without her mother by her side. In a moment of reflection, Jenna decides to record a set of audiocassettes — The Milestone Tapes – leaving her voice behind as a legacy for her daughter.

Nine years later, Mia is a precocious sixteen-year-old and her life is changing all around, all she wants is her mother. Through the tapes, Jenna’s voice returns to teach Mia the magic of life, her words showing her daughter how to spread her wings and embrace the coming challenges with humor, grace and hope.

THE MILESTONE TAPES is the journey of love between a parent and child, and of the bond that holds them when life no longer can.

With much determination, Jenna willed her fingers to press the record button. She couldn’t allow herself to think about how silly she felt speaking the paramount words to only herself and a small tape recorder in the dark of her office, years and years before they’d even harbor an inkling of truth. Or, how heartbreaking it felt to know that eventually she would be finished recording and the silence left behind would speak volumes.

She had no notes, no frame of reference and no way of knowing exactly what her daughter would need to hear when she finally, in time, came about pressing play. All she had was a list, a list of milestones and a corresponding blank tape.

The fear and utter sadness of that enveloped her like an inferno, burning her, buckling her heart and breaking her in a million ways that would remain unseen, as so many other breaks did. She would never really know if she got it right, of course. She’d. Never. Know. And, if she were being honest now, that realization had been the driving force behind the recordings to begin with.

Hadn’t that knowledge pinged her so many months ago, while the quiet of the morning and darkness of her home gave the illusion of peace and rightness, and did nothing more than make her think.

But even more than that, wasn’t the unknown what she’d been fighting all along. Trying to somehow rally against what the doctors told her was inevitable, trying to be the exception rather than the rule. Jenna knew that she had fought hard, battled with every moment, with umpteen doctors, with every drug, every needle or pill or hope. The fighting had never been the problem; it was simply what she was fighting against. That thing, so bound and determined to win.

So now she was left with the unknown. All of the things that couldn’t possibly be known. It was no longer a question of science, medicine and time. Now it was a matter of fate, faith and the natural unfolding of things. Jenna had resolved that, although everything moving forward would be unknown, she would plan and prepare and hedge her bets like a mother would, she would bet on her daughter, and leave behind her voice.

She knew her little girl now. She knew the determined expression that would cross her face when they worked together side by side in the expansive kitchen she had designed for family time and togetherness. She knew the jubilant smile that would never fail Mia’s face when she huddled over her English homework, letting her unique brand of creativity roll off in waves, limited only by what she could spell and express at seven years old. She knew the tell-tale face of a fib or half truth, Mia’s mouth dropping open just enough, as she tried not to smile and tried harder to convey honesty. She knew the way Mia’s lower lips would tremble as she departed the bus when the kids had been less than kind, running for the security of home and the comfort of her mom, running to the place that would nurture and welcome her budding individualism rather than shy away from it.

Jenna knew Mia better than she knew herself in every single way possible; she was her mother. From the very beginning, her baby girl had been the epitome of a miracle in Jenna’s eyes and remained steadfast in that role forever after. Mia was Jenna’s sole reason for the death match that spanned out behind them now, defining holidays and birthdays, along every other ordinary day. Mia was reason and logic, hope and heartbreak; she was Jenna’s dream personified. The prose of that would have made Jenna laugh, had the thoughts and feelings ambushed her in a normal life. But in her life, their life as a family with their singular child, the emotional turmoil was highlighted and hung from their only child. Jenna knew she could never, even if words flooded her, really say enough about her daughter.

But who would Mia be when these tapes became relevant?

Suddenly the unknown crept in again, playing around, twisting two or five or a million different landscapes. Landscapes Jenna would be absent for. Would Mia be analytical and thoughtful, living a life of logic and reason, a breathing echo of her father? Would her love of words bloom into a love of numbers? Or would she hold fast, stay true to her dreamy and creative nature?

Would some of these tapes be left, unheard, in their little plastic casings because they didn’t apply to Mia? And if they didn’t pertain, why not? But, if they did, and Mia needed them, and Jenna failed to push the worry aside, then what? What if Mia carried the responsibility, all the joys and all the burdens of life alone? The stark thought of that was enough to cripple Jenna.

Jenna pressed her finger firmly against the flat button with the red circle. She thought about the laughter and tears, the piles of homework, the family trips, the snuggles and hugs and kisses and fights. She thought about her husband, trying to understand the enigma that was the teenage girl. She pictured her daughter, grown up with a life, maybe even a family, of her own. And she felt courage; these tapes were not expectations, they were hopes— her hopes. And with all of that floating around in her head, she began.

Ashley Mackler-Paternostro lives on the outskirts of Chicago with her husband and their three dogs. The Milestone Tapes is Ashley’s first novel. 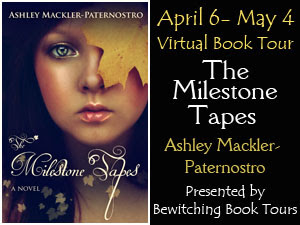