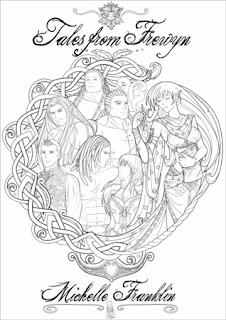 Tales From Frewn
by Michelle Franklin

ASIN: B0052O4ZQEThe
Haanta Series is the longest, ongoing, online romantic fantasy series. Thousands of readers visit the world of the Two Continents to enjoy the daily short stories featuring all their favorite characters from the Haanta Series novels.
In between the business of the books, the commander, Rautu, Otenohi, Unghaahi, Leraa, Kai Linaa and Alasdair enjoy some time together in Diras Castle, but as the stories portray, mischief lies in every corner of the keep where spiders, chocolate pies, petulant giants and grouchy cooks abound.

Rautu leapt to his usual position beside the iron stove still pointing at Kai Linaa, warning her that thought he was beside his mate he was still watching her.

You can purchase Michelle Franklin’s Tales From Frewyn on Amazon

About the Author:
Michelle Franklin is a small woman of moderate consequence. She write many, many books about giants, romance, and chocolate. She is the author of many published fantasy stories and the Haanta series.