Synopsis:
“Life sucks. Then you die. Or, if you’re Dick Moonlight, first you die and then you live.”

Really dead this time, now that three President Obama-masked thugs dressed all in black and communicating only with hand-held voice synthesizers pressed up against their voice boxes have beat the life right out of him inside a dark, downtown Albany alley. What are the thugs after? A box. Size, weight, description unknown. They also want him to stay away from his newest and only client: a handicapped nuclear engineer of dubious Russian heritage by the same of Peter Czech.

But then, now that they’ve killed him, Moonlight’s problems seem to be over. In fact, as he undergoes an out of body experience, his soul floating above his train-wreck of a corpse inside the Albany Medical Center I.C.U., he feels pretty damned good. Great in fact. To make death all the more sweeter, his one true love, Lola, is standing by his bedside. With her long dark hair draping her chiseled face and big round Jackie O sunglasses hiding tear-filled eyes, she appears every bit the grieving sig other. Nothing could make the dead-and-gone Moonlight prouder.

But then something happens. Something bad. A man enters into the I.C.U. Some young guy. He takes hold of Lola’s hand, and pulls her into him. Together, the two share a loving embrace over Moonlight’s dead body. Now, what seemed like a peaceful death is anything but. Moonlight wants back inside his body so he can face-off Some Young Guy and find out if his true love has in fact been cheating on him. At the same time, he wants to find out the true identity of those thugs who killed him so he can exact his revenge. No doubt about it, Moonlight needs to live if he’s going to uncover some pretty painful answers and take care of business.

Like a little kid dropping down a playground slide, Moonlight slides right back inside his bruised and broken body. Opening his eyes the white light blinds him. He feels the pain of his wounds and the pain of his breaking heart.

Life sucks, then you die.


Maybe that’s because of the spec of bright white light forming in front of your eyes. You begin to feel yourself moving from the ceiling towards the light through this tunnel at lightning speed. It’s like something out of the Discovery Channel. You’re moving faster than light itself. You’re not afraid of the speed, not afraid of crashing, not afraid of dying. Because what the hell, you’re already dead.

Next comes the heavenly brakes gently applied and you find yourself standing inside the pool of light. There’s somebody walking towards you. At first the somebody looks like ET waddling through all that light. You know, just a little dark, awkward silhouette. But soon ET begins to take shape. The closer it comes at you, the more it takes on a human form. Then, just like that, the silhouette becomes a real person.

Holy crap, you haven’t seen your dad since he bought the farm from the big C all those years ago. And the funny thing is, he’s younger than you are now. He died at 46 years old and you just turned 48. Now you’re older than the old man and you’re standing there inside all eternity with him.

You’re not sure what to do. You don’t know the newly-arrived-in-heaven protocol. Do you hold out your hand for him to shake? Do you take him in your arms and embrace him? You were sort of close back on earth. But you weren’t touchy feely.

You opt for the easy way out.

The old man is dressed in the suit you buried him in under the oak tree at the Albany Rural Cemetery. Black pinstriped double-breasted, bright red rose on the lapel, hair slicked back with Dippity-Do. He looks pretty damn good for a guy been dead going on three decades.

—Son, I’ve missed you. I’ve been able to watch the play-by-play over the years and I must say, life hasn’t been easy for you.

Okay, now you feel red-faced embarrassed. Was it possible for the old man to see everything you’ve done? With and without clothes on?

You find yourself touching the small button-sized scar behind your right ear, where a small frag of .22 caliber hollow-point penetrated your skull during an aborted suicide attempt that went bad. If any of that makes sense.

—Things kind of got out of control, son. Your wife, she had an affair with your partner. Then you fell in love with a sadly married scarlet-haired beauty whom you could not have, and it nearly killed you both.

—You disappointed in me, dad?

—You lived. You survived for your boy. But Richard, you are a hopeless victim of love.

The old man is smiling at you now. You can’t believe he’s really there in front of you. Alive but dead. Younger but older. But time is of the essence here, and you decide to pull off the nearest exit on this conversation and take a new route.

—Time is a nothing here.

—Are we in heaven?

—You could say that. I believe I raised you to believe in that kind of thing.

—What should I do first?

—You do nothing because you’re not done with life.

The old man’s smile melts off his face. He takes a step back, purses his lips. You pick up on the old man’s expression right away. It means the earth, or should you say heavenly space, is about to shift right out from under your feet. 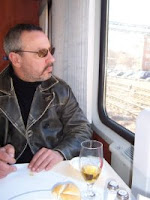 ABOUT THE AUTHOR:
Vincent Zandri is the No. 1 International Bestselling Amazon Kindle author of THE INNOCENT, GODCHILD, THE REMAINS, MOONLIGHT FALLS, CONCRETE PEARL and the forthcoming MOONLIGHT RISES. He is also the author of the bestselling digital shorts, PATHOLOGICAL and MOONLIGHT MAFIA. Harlan Coben has described his novels as “…gritty, fast-paced, lyrical and haunting,” while the New York Post called THE INNOCENT, “Sensational…Masterful…Brilliant!” In March, April and May of 2011, he sold more than 100,000 Kindle E-Books editions of his novels, and is rapidly closing in on the 200K mark all totaled. An MFA in Writing graduate of Vermont College, Zandri’s work is translated into many languages including the Dutch, Russian and Japanese. An adventurer, foreign correspondent, and freelance photo-journalist for RT, Globalspec, IBTimes and more, he divides his time between New York and Florence, Italy.

Disclosure: This Excerpt was provided by the Author as a part of the Partners In Crime Book Tours. This is NOT a sponsored post. This is Keeping Up With The Rheinlander’s personal opinion.