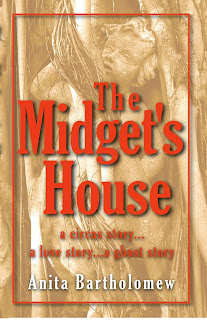 The Midget’s House is a tale of two women (one alive, and the other long dead), each mourning lost love and struggling for control of the one place that feels like home.
Marisa Delano is thrilled when she unexpectedly inherits the fairy-tale like cottage on the bay—until she learns that Lucinda Lacey, a sideshow midget who died on the property in 1924, still inhabits it. As Marisa searches for answers about the unwelcome presence in her new home, all the clues lead to one conclusion: on the day Lucinda died, she murdered her lover, circus owner Cyrus Parker.

Alternating between Lucinda’s and Marisa’s perspectives, The Midget’s House takes readers from the carnivals, circuses, and freak shows of the early twentieth century, to the boom-and-bust of today’s Florida.

Haunting in every sense of the word, this genre-blending tale will stay with you long after you turn the last page.

Prologue
March 2004
The Height of the Last Florida Real Estate Boom
A faded gray Buick clunker idled in the winding drive. Palm trees whipped by the wind blowing off Sarasota Bay cast tentacle-like shadows across its chassis.
The plump young night nurse slipped out of the house by the side door. She hadn’t dared leave until she was certain her patient was asleep but, having heard the deep, even snores, she felt confident that the amply medicated old lady would be unconscious at least until daybreak.
Enid Parker’s bones had gone brittle and her muscles had atrophied, making it impossible for her to do much beyond lie in her bed if she did awaken. Her hair, long since leached of all color, had thinned to baby fine strands. As senile and infirm as she was though, Enid could still make a ruckus when she felt ignored. The nurse had earned several screeches of complaint over the past three evenings, which was how long she’d been employed as Enid Parker’s caregiver. She was glad for the work and accustomed to difficult patients so she didn’t consider turning down the assignment even after learning that an earlier nurse had walked off the job in the middle of the night, blithering incomprehensibly. Some other nurses simply couldn’t hack it, she knew, but she didn’t have much sympathy for them. Handling the job, where crotchety old folks were concerned, meant sucking it up when they heaved verbal abuse, not just parceling out the pills at the appropriate hours or cleaning up the messes from their saggy bottoms to their soiled linens.
But now that the old woman slept, she saw no reason to lurk in the creaky old house through the night.
She darted to the car, swung her wide hips onto the passenger seat, and quietly pulled the door closed behind her. The young man at the wheel put his sputtering vehicle in gear, drove it past the decorative iron gate and on toward the outside world. She’d be back in plenty of time with no one the wiser.
*
Despite enough medication to sedate a Clydesdale horse, Enid Parker did not rest easily. Moments after her nurse’s departure, her creped eyelids fluttered open.
“Papa?” she murmured. “Are we going to the circus? Can I ride the elephant? You promised.”
Not getting an answer, she reached out tentatively with one arthritic hand, as if attempting to see through her fingertips. Wispy white eyebrows bunched together as clouded pupils strained to focus.
Then anger sparked in those dull eyes.
“Lucinda!” she shrieked. “You get out of here. Get out. GET OUT OF MY HOUSE. My house …” Her heart accelerated, pumping blood through tired veins and arteries, tingling her desiccated skin to an almost healthy pink.
Forgetting her infirmity, Enid forced herself upright, determined to eject the intruder.

The effort exhausted what little life was left in her. 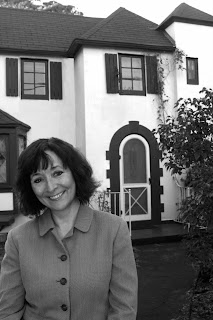 ABOUT THE AUTHOR:
Anita Bartholomew is a former long-time contributing editor to Reader’s Digest whose articles have also appeared in numerous other major periodicals. She is the co-author of Dr. Yvonne Thornton’s award-winning memoir, Something To Prove (Kaplan 2010), and has acted as an editorial consultant to a great many other authors, including some whose books have appeared on US and international bestseller lists.

ABOUT THE HOUSE:
There are many legends about the house in the Indian Beach neighborhood of Sarasota, Florida:  That it was built for Ringling Circus midgets… that there is a treasure hidden inside its walls… that it is haunted.

Its true history may never be known, but Anita Bartholomew’s imaginings about what that history might have been form the basis of this novel.

GIVEAWAY:
YOU can enter to WIN 1 of 2 E-Copies of the Midget’s House HERE 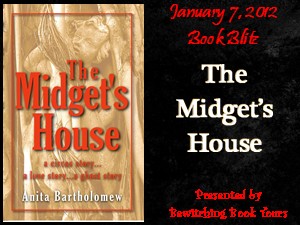 Disclosure: This Excerpt & Giveaway was provided by the Author as a part of the Bewitching Book Tours. This is NOT a compensated post.
Kindle