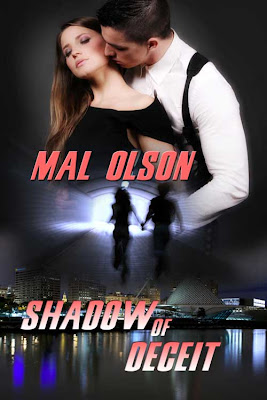 When Crazaniak convinces Shannon she needs his protection, they partner to unearth secrets her husband left behind—secrets involving a Tanzanian mine that yields perfect blue diamonds coveted by dealers around the world—secrets connected to a terrorist leader Crazanaik has vowed to take down.

With danger surrounding them, two emotionally wounded souls bond, but can they put their demons to rest and trust in love? Can they survive long enough to find out?
EXCERPT:

Someone knocked on her window.

Heart in her throat, every muscle in her body tensed as she jerked her head toward the passenger side and looked through frosted glass into the face of Special Agent Tony Crazaniak.

Relief uncoiled the knot in her stomach. She’d never been so happy to see anyone in her life. She unlocked the door, and he opened it.

“Jesus, what the hell was that all about?” He dipped his head and plunked a snow-clogged foot onto the floor mat as he grabbed her bags and tossed them over the seat.

“I don’t know, and I wasn’t sticking around to find out.”

Cramming six-foot-plus inches of man into her Porsche was like stuffing two hundred pounds of prime beef into a picnic cooler. But he managed not only to squeeze in and make himself comfortable, he took charge.

She eased the accelerator, launching forward into an ice-jammed gridlock of traffic crawling west.

“You want to tell me what’s going on?” His shoulder brushed against hers when he shifted in the seat.

“I would if I had the slightest clue.”

His heat made her nerve endings prickle. And as far as telling him what was going on? The “would if I could” may not have been the entire truth, but it was close enough. Besides, she didn’t want to tell him anything. Yet.

What did she actually know?

Snow bunched on the windshield as the wiper blades plowed through thick gruel, as her brain churned, as she tried to come up with an answer the FBI operative would buy. “Obviously someone’s after me.”

Snapping her head around, she glared at him. The full effect of his intense eyes sent heat waves rippling down her spine.

“No.” Cheeks blooming hot, she tugged her glance away and added, “No lovers.”

She felt his scrutiny slow-slide over her. The bloom that heated her cheeks spread down her neck.

“You ought to fix that,” said Tall-Dark-and-Scrumptious.

And the fact that she noticed that he was scrumptious flustered her. She wasn’t looking for…anything. Although, she could use his broad-shouldered, don’t-mess-with-me attitude and his FBI badge riding shotgun until she ditched the Lexus.

“Listen, I’m not…I mean…” What did she mean? “Not in the market…All I want is a guard dog until I lose the lunatic in the Lexus.”

He shrugged. “Can’t blame a guy for trying.” His smile slammed the scrumptious meter so high she heard bells ring, which made her reconsider her comfort level. She realized she would be safer, at least on an estrogen-to-testosterone level, without his massive presence and raw animal magnetism steaming up the Porsche’s windows.

Looking into the mirror, she couldn’t see the Lexus. She turned around and still couldn’t spot it. Even if it were there, it couldn’t pass four cars on Wisconsin Avenue on a good day, let alone in this snowy mess.

“On second thought, why don’t I pull over at the next light and you can hop out. If I want help, I’ll whistle.”

“I don’t think so.” He swiveled to look out the rear window, his mouth nearly brushing her cheek.

Too close. Too hot. Too dangerous.

She couldn’t pull over without getting stuck in the slushy excuse for a right lane, but that didn’t mean she couldn’t stop, and that he couldn’t let himself out.

When the line of traffic stalled again, she eased her foot on the brake and said with a prick of guilt over ditching him in calf-high muck, “End of the ride, Agent Crazaniak.”

He shook his head.

“I can make it home from here. Thanks for your concern.” Too bad he hadn’t worn boots.

He settled his broad shoulders against the seat.

“I no longer need your assistance.” She glanced over her shoulder again. “The Lexus is gone.”

“Not my style to leave a woman in distress.”

“Distress?” At the moment, he was the cause of her distress. All she wanted was to get rid of FBI Agent Tony Crazaniak.

Her attention snagged on the Tahoe in front of them, which attempted a jackrabbit start, fishtailed, and landed in a snow bank.

“Maybe when you get out, you could give the guy in the Tahoe a hand.”

She reached into the glove box and whipped out a gold lipstick tube. “I’ve got it.” Pepper spray. She waggled bouquet de Red Hot Chili Pepper at him.

“You need my protection.”

“How do I know you’re really an FBI agent?” She flipped off the top.

He eyed her small but effective weapon.

“Come on, Shannon, don’t mess around.” Raising his hands in surrender, he leaned away and grasped the door handle. “I don’t think you want to do that.”

“All I want is to go home. Alone…please.”

A nanosecond later, she found herself watching him stuff her pepper spray into his pocket. She didn’t know how the exchange had happened. Other than fast.

“Protective custody.” He patted his pocket. “I’ll get you home safely, and you won’t even have to whistle.”

Dear God, she was trapped in her car with a man who oozed so much male charisma she felt like she was drowning in testosterone.

“Seriously, how do I know your ID is legit? You could be an ax murderer for all I know.”

“You want to call the Bureau?” He offered his cell phone. “You can get the number from information. You wouldn’t want to trust a suspected mass murderer for the correct number.”

She rolled her eyes.

When she took the phone, his body heat clung to it and warmed her palm, irritatingly so. “Are you, really?”

“What, hiding an ax under my jacket?”

“What do you think?”

She thought he wanted to interrogate her. And none of the nice guys she knew were pumped like Hercules. Rather than answering him, she spoke into the phone, “I’d like the number for the Federal Bureau of Investigation.”

The car behind them honked, and she turned her attention to driving and squeezed past the stranded Tahoe. While edging into the intersection, she concentrated on the snow squall, the taillights of the car ahead of them, and on memorizing the numbers the automated voice was reciting in her ear.

“Look out!” Crazaniak yelled as the Lexus materialized from the right, racing toward them. “The bastard must have turned off somewhere and circled around.”

“Jeez, he’s going to ram us!” Shannon dropped the phone and stomped the gas pedal. The tires whined and spun and finally dug beneath the slush. But when rubber found traction, the car catapulted forward too fast.

Her 944 swapped ends twice on the glazed surface and came to a dead stop in the middle of the intersection.

The Lexus revved its engine, its wheels pelting ice. Then rocketed toward them for a second attack.

Paralyzed, Shannon froze in terror. Every muscle in her body locked up. Static electricity lifted the hair at her nape. An image of the accident two years ago flashed through her mind. 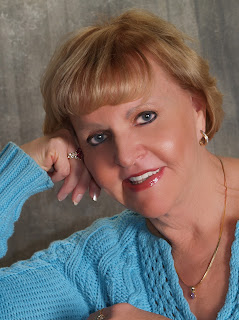 Mal Olson writes adrenaline-kicked romantic suspense. When her consuming passion for writing allows time, she enjoys reading, flower gardening, jamming with friends on the mountain dulcimer, and hiking in a nearby state forest (or in the mountains somewhere). She has three grown children and one granddaughter and resides with her own special hero in southeast Wisconsin where she juggles writing time with her freelance landscape design business.
Connect with Mal Olson
Website
GIVEAWAY:
How would you like a copy of Shadow of Deceit for yourself?? Mal Olson has generously offered 5 EBook copies and 1 $15 Amazon Gift Card toone of our readers TOUR WIDE! Just enter on the Rafflecopter entry form below! If you have any questions or concerns about the Rafflecopter form please leave a comment. Good Luck and Thanks for entering. 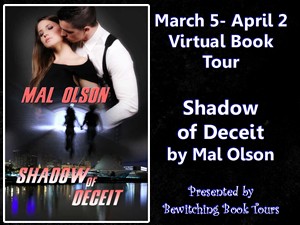 Check out the rest of Mal Olson’s Tour!!
Disclosure: This Excerpt and Giveaway was provided by the Author as a part of the Bewitching Book Tours. This is NOT a compensated post.