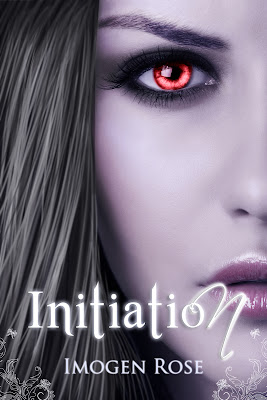 Initiation
Author: Imogen Rose
Genre: Paranormal YA
DESCRIPTION:
Welcome to Bonfire Academy!
Set in the foothills of the alpine mountains in St.Moritz, this exclusive private school caters to a special kind of student. Enter at your own risk… but if you are human, you may not want to enter at all.

WARNING: This YA story is set in a school for paranormals who are very different from normal human teens. Thus, the language and some scenes might not be appropriate for younger YA readers. Recommended for those sixteen and above.

Check out what the reviewers have to say:
Let me lay it out for you. This is a five star book. Period. Heck, I think nearly all of Imogen Rose’s books are five stars in my eyes so far. It’s kind of crazy. Did the author make a deal with the devil or something to get this level of pure talent or what? Or maybe one of these demons from this book? Hmmm… Candy Beuchamp (Candy’s Raves)

‘It is better to fail in originality than to succeed in imitation.” – Herman Melville

That one phrase changed my life, AND my perception of what people expected. So I wrote it down, in a little black book, and put it in my purse. Now, I can’t tell you exactly how many times I have read that 1 phrase since I wrote it down, but every time I read a book, and then bask in the brilliance of it’s originality I think of Herman and his wise advice. THEN…I think of the authors that exude this quality more than most. Imogen Rose is one of these authors.- KindleObsessed

EXCERPT:
She eyed Faustine and took a long sip from her bottle of fresh blood. “So, you’ve been through quite an ordeal. Way to start Initiation, Faustine. Now, I need to talk to you both separately, though Jagger insists on being around when I talk to you, Faustine. You know, in case I get the urge to snack on you.” She laughed. “Just kidding, of course. I never snack on my clients.” She rolled her eyes. “Since he isn’t here yet, let’s start with you, Cordelia. Faustine, can you excuse us for a bit? Quinn is waiting outside to take you back to your room.”
I wondered where Jagger was. We were sitting in his office. Was he asleep in the next room? I fought the urge to check it out, and potentially jump his bones again, the memories from the ski slope still fresh in my mind. I shook myself and turned my attention back to Octavia. “So, what do you think?”
“Like Jagger told you, I’ve seen the video. Now I need to hear the story from you. Your impressions may uncover additional clues.”
“Like what?” I asked, confused.
“Smells, for instance. There could be other things as well, so start from the beginning and tell me everything. Don’t leave out any details. Try to remember smells, colors, and things like nails–manicured or not–designer labels, everything, no matter how insignificant it may seem. Play the scene in your head in slow motion, analyze every nuance.”
“Okay.” I did what she said and told her everything I knew, which wasn’t much more than the video would show. I described the rancid smell of the shifters. “You know, just regular shifter smell.”
“Male or female?”
“There were four males and one female. You can see that on the video.”
“No, I mean how many female and male scents did you pick up before you actually saw them?”
I closed my eyes, trying to remember. Truth was that I wasn’t very good at the whole sniffer thing.
ABOUT THE AUTHOR:

Connect with Imogen Rose
Website
Facebook
Twitter
GIVEAWAY:
8 winners will win one of the following:
4 signed paperback copies of INITIATION
1 of each:
Inititation Sack Pack
Initiation Bear
Initiation Toiletry bag
Initiation Gym Bag
Just enter on the Rafflecopter form below! Good Luck and Thanks for entering!! 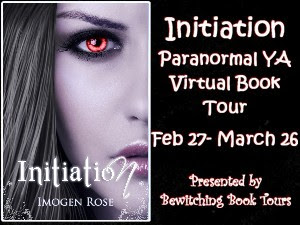 Disclosure: This Excerpt and giveaway was provided by the Author as a part of the Bewitching Book Tours. This is NOT a compensated post.
Kindle