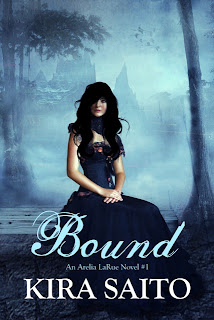 Sixteen year old Arelia LaRue lives in New Orleans where the music is loud, voodoo queens inhabit every street corner, and the ghosts are alive and well. Despite her surroundings, all she wants is to help her Grand-mere Bea pay the rent and save up for college.
When her best friend Sabrina convinces her to take a well-paying summer job at the infamous Darkwood plantation, owned by the wealthy LaPlante family, Arelia agrees.

However, at Darkwood strange things start to happen, and gorgeous Lucus LaPlante insists that he needs her help. Soon, the powers that Arelia has been denying all her life, come out to play and she discovers mysteries about herself that she could have never imagined.

EXCERPT:
It had to work. It just had to. After repeating the chant at least six times, it still didn’t work. “Fine you greedy spirits!” I yelled. It was clear that they wanted more blood. In a rage, I drew more blood, this time slashing my palm. I brought my dripping palm up to Ben’s neck and repeated the chant. After a few minutes, I felt a distinct energy. It was a force within me so incredibly strong that I was convinced that I was able to move a mountain if I wanted to or even get Sabrina to stop talking about boys.
“Arelia what are you doing?” Ben’s voice forced me to open my eyes.
“You’re strangling me.”
I realized my hands were gripped a bit too tightly around his neck. I unwrapped them to find that his wound had completely healed, and his fever was gone. “Ben, you’re okay!” I exclaimed. I gave him an enormous hug.
“Of course, I’m okay,” he said. “I’m just sleepy it was a long night. Tell the alligators and ghosts that I’ll see them tomorrow.” He closed his eyes and fell into a deep sleep.
In my excitement, I leapt up, and by sheer impulse gave formerly-shirtless guy a hug. As my body touched his, I could smell him and felt my skin tingle.
Delicious chills overtook my body. He wasn’t wearing any cologne, but he smelt lovely. Warm and familiar mingled with a dash of sadness and danger. I caught myself clinging to him and took a step back in embarrassment. My moment of conquest had quickly passed, and I realized that I was standing next to a swamp, in front of a stranger in a corset and petticoat which basically translated to a bra and underwear. I was horrified.
Formerly-shirtless guy looked at me like the existence of Santa Claus had just been proven before taking off his jacket and wrapping it around me. “You must be cold,” he observed. “Your hand is bleeding.” He ripped a sleeve off of his shirt and covered my palm.
In my state of absolute exhilaration, I had failed to acknowledge the fact that the night had gotten a bit chilly. My entire body was covered in goose bumps, and my hand was leaking blood everywhere. “Why did you follow me?” I wrapped his jacket around me realizing that I was standing in the middle of nowhere with someone who could be a psychopathic, serial killer.
His lips broke out in an amused smile. “Do you think I’m stalking you?” He asked hovering over me. It really sucked being short sometimes. Standing at a measly five foot three inches made me feel as if I lived in a world full of giants. At this moment, formerly-shirtless guy looked like a giant even though he wasn’t freakishly tall or anything, maybe slightly over six feet.
“Well, how else can you explain being here?” I stated what I thought was the obvious. I tried to stand on my toes, hoping to make myself appear taller.

Kira is a magic junkie and loves writing YA paranormal romances. Some of her heroes include: Jack the Pumpkin King, Willy Wonka, Larry David, Princess Tiana, the vampire Lestat, Andy and her Maltese Costanza.

A NOTE FROM THE AUTHOR:

The Arelia LaRue Series
First I just want to say thank you to everyone who bought a copy of Bound, I truly appreciate it, even if you ended up hating the book.

Second, I want to let readers who actually liked Bound where the series is going and why I chose to write it the way I have.

I didn’t choose the concept of voodoo because I thought, hey it’s never been done before, I chose it because I am fascinated by it and really find it so rich and complex, I think it deserves to be explored a bit more especially in books. However, I didn’t want it to become a boring history lesson or anything so I decided to make the series a bit humorous, threw in the Dumptys and gave the spirits their own personalities. But, I did spend a lot of time researching the spirits, yes, in voodoo Erzulie, Bade and Brise all do exist, in the book they stay true to their real functions with a bit more personality.

I made the book light but still wanted to touch on real themes that are historically important to New Orleans like slavery , racial/class differences/amazing food!!!!!!!!!!!!!!

When I wrote Bound, I wanted the book to be about Arelia, the Arelia show. I wanted it to be her struggle to accept her destiny and all the confusion that it brings.

I didn’t want her to just walk into Darkwood and say “Cool I’m a voodoo queen! Yay Lucus is so hot, I’m in love with him.” Instead, I tried to put myself in her shoes and tried to see what I would have done at 16. Basically, I would have been emotional, irrational and very confused. If someone told me I was destined to be a great voodoo queen today, I would still be irrational, confused and emotional.

The relationship Sabrina and Arelia have is realistic in my opinion because it’s the one I have with my best friend. she’s not rich or anything, but we fight and argue and bicker, but in the end we still love one another. I don’t think I would be best friends with her if it were a fairy tale type relationship.

So in the first book we find out that Lucus is well, you know….cursed.

In Punished the focus will be more on Arelia’s powers and the spirits, a lot more about Lucus, Ivan and Louis Beau and their complex history as well as more focus on Arelia/Lucus.

Finally I don’t want readers to think I am insulting their intelligence because I chose to make the series a bit light rather than dark and dreary. 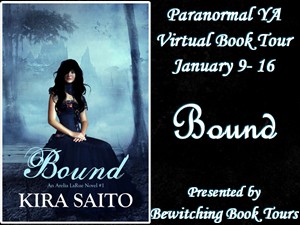