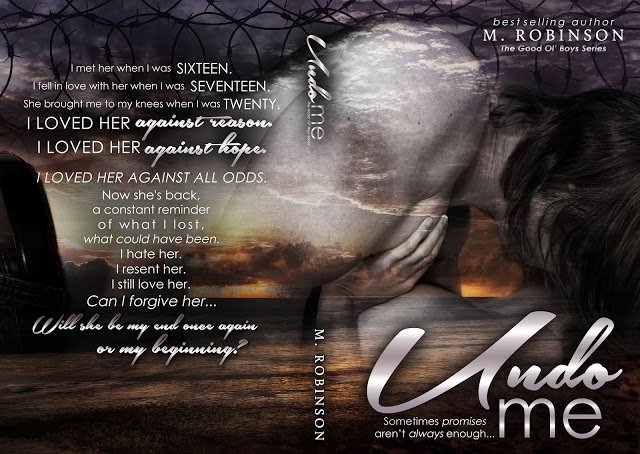 Now she’s back, a constant
reminder of what I lost, what could have been.

I hate her.
I resent her.
I still love her.
Can I forgive her…
Will she be my end once again
or my beginning?
REVIEW by Monique

SUGA – BE READY TO HAVE YOUR
HEART RIPPED FROM YOUR CHEST & KISSED WITH 5 SWEET STARS, BEFORE IT’S
HANDED BACK TO YOU!
UNDO
ME is the third book in the Good Ol’ Boys series and is Dylan and Aubrey’s
story. UNDO ME did just that, M. Robinson ripped my heart out of my chest then
cuddle it in her hands only until I had finish reading! UNDO ME is my new
favorite novel in the series only second to Lucas and Alex’s story in COMPLICATE
ME.
“Love isn’t supposed to hurt
this much.”
Aubrey
is a freshman whom has transferred from California to North Carolina with her
mother. Dylan McGraw is the local cocky surfer and the second oldest of the
group of friends known as – The Good Ol’ Boys. Aubrey and Dylan first meet in high
school when Aubrey confronts an arrogant Dylan. Dylan knew he was an a$$hole,
but no girl had ever called confronted him until – Aubrey.
“She was perfect. She came into my
life like a riptide, taking down everything in her path and dragging me right
along with her. I couldn’t remember the last time I came up for air, took a
second to breathe, a moment to catch my bearings and try to fight against her
pull. Her current was strong and growing every time I was with her. I was lost
in the waves of everything she had to offer. I never expected to fall for her.
I wasn’t even looking for anyone, but there she was, this girl with such a
force, such a drive. It was so fucking powerful that I never stood a chance.
There was no push and pull.”
Aubrey
Owens most definitely can handle her own, especially after chewing on Dylan’s
a$$ after the way he treated her friend. Although Aubrey demands nothing but respect
from Dylan, she too could not resist his sweet charm.
“It was one thing to think you
knew, to assume, but when it was staring you right in the face, when he was
looking at you, it changed things, it changed everything.”
Dylan
was drawn to the only girl that seems to be immune to his charm- Aubrey. Like
the tides of the water, Aubrey and Dylan are drawn together like a natural
force pushing and pulling them together passionately.
“Her current was strong and
growing every time I was with her.”
Aubrey
is fighting her own demons and believes she will not find good in her future,
so tragedy comes early along with guilt and pain. While Aubrey chooses to
punish herself for her secrets, she is slowly hurting the man who she met so
many years ago – Dylan.
“For the first time in my life I was
lost. I tried to find that man. The one that you met. The one that you loved.
The one that was made just for you. I couldn’t find him. The more I searched,
the harder it was to accept that I might never be him again.”
Author
M. Robinson’s has done an AMAZING job writing a raw heart wrenching love story that will CONSUME your
emotions with SADNESS, SUSPENSE, SHOCKED, TRAGEDY, ANGER, LONELINESS, PASSION, and
LOVE. UNDO ME is A MUST READ, with twists and turns so “suga.”
be prepared to be undone!
“The years of memories, mistakes, and regrets
came rushing over me. Piling on top of me, their weight suffocating me. The
first time I met him. Our first talk on the beach. Our first date. Our first
kiss. The first time he told me he loved me. The first time we made love and
every time after that. Our love… That was taken away so harshly, so violently,
so unfairly.”
Author M. Robinson’s novel in The Good Ol’
Boys series, UNDO ME – 5 AMAZING STARS! 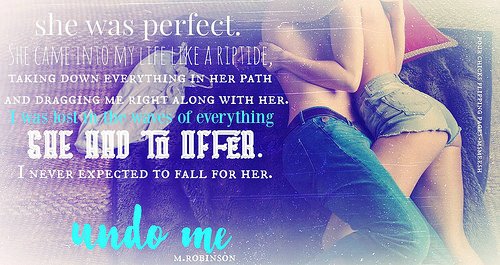 He pulled back a little, resting his forehead on mine to
look into my eyes. To cripple me in ways I never thought possible. There was a
hunger in his glare that I couldn’t quite place, he wasn’t even touching me and
yet I still felt him all over. Both of us were panting, our breathing mirroring
one another’s, our hearts escalating higher and higher and beating beside each
other.
So intense.
So consuming.
So mind-blowing.
In that second, in that minute, in that hour… I wanted him.
I wanted his touch, I wanted his kiss, I wanted his taste, I
wanted all his movements, all his adoration and his love, all his devotion, his
laugh, his smile, everything, anything.
Every. Last. Part.
Him.
I reached for the front of his shirt, unbuttoning it and
pulling it away from his body and he let me. I touched the pulse of his neck,
down to his heart, passed his taut abs until I reached his belt. The warmth and
velvetiness of his skin made my sex clench and my stomach flutter. The
butterfly feeling never got old. It was becoming one of my favorite feelings.
A feeling only he could ignite in me.
I gasped when he unexpectedly gripped my hand, stopping me.
“Are you sure?” he huskily rasped, my favorite sound in the
world.
Before I could assure him, tell him what I felt so deeply in
my heart, tell him how much he meant to me, how much I wanted to be his and
only his, how much I wanted him to undo me.
Own me.
He hoarsely murmured against my lips, “Suga’ once I start
there will be no going back. I won’t stop until I’ve explored every last inch
of your flesh… until I’m etched so far into your heart that you’ll never be
able to touch your skin and not feel me.”
With wide eyes I swallowed hard and breathed out, “Promise?”
“Always.”
He let go of my hand and I unclasped his belt, next were his
slacks, pulling them apart and lowering the zipper. Before I could touch him
where I really wanted to, where I had been craving since the second I saw him
in his black tuxedo, he slapped my hand away.
“This isn’t about me. This is about you.”
His gaze set me on fire, my heart kicked into overdrive. I loved
having him look at me like that. Knowing I never wanted him to stop looking at
me in that way, the way that made me feel like we were the only two people in
the world, like I was the only girl in the world. He had my heart in his hands,
to do what he pleased with.
I knew right then and there that I would never be able to go
without him.
He licked his lips and leaned in to kiss me. The second his
tongue touched mine, it turned into its own moment, its own creation, its own
world. His body fell forward and mine backward, pushing me further into my
mattress. My legs spread wider and he readily lay in between them, placing all
his weight on his arms that were cradling my face. The room was dim, but I
could sense him everywhere and all at once.
“You’re so fucking beautiful, Aubrey. So damn beautiful,” he
groaned into the side of my neck as he placed soft kisses down to my cleavage
and toward my nipple. He sucked it into his mouth as his hand caressed my other
breast, leaving me withering beneath him. Chills running up and down my waiting
body. My back arched off the bed, wanting more and he obliged. I could feel his
erection on my wet core as he purposely moved his hips, grinding against my
heat, creating a delicious tingling that I felt all over.
I sucked in my bottom lip to conceal the moan that was about
to escape.
“Darlin’, I want you to make every fucking noise possible.
Do you understand me?”
I moaned in response and it earned me a forceful yet tender caress
of his hand against my clit. He manipulated my bundle of nerves and within
minutes my legs started to shake and I couldn’t keep my eyes open. He
effortlessly made his way down my body, pushing his fingers into my opening and
sucking on my nub in a back and forth motion.
My hands immediately gripped his hair and he grunted in
satisfaction. I couldn’t take it anymore, the room started to spin and my
breathing faltered.
“Hmm… ah… mmm…” I exhaled.
The next thing I knew, he was kissing me, and I tasted myself
all over his mouth. It was intoxicating as much as it was arousing. He knew my
body better than I did, spending hours upon hours exploring it until he
memorized every last curve.
I heard a rustling of some sort and opened my eyes to see
that he was opening a condom as he kicked off his slacks and boxer briefs. I
watched with fascinated eyes as he rolled it up his big, hard cock, barely
being able to contain my need for his body to once again be on top of
mine.
He kissed me again, giving me exactly what I craved and
placed the tip of his dick at my opening.
“I love you,” he whispered in between kissing me.
“I love you, too. More than
anything,” I murmured, not breaking our kiss and eye contact. 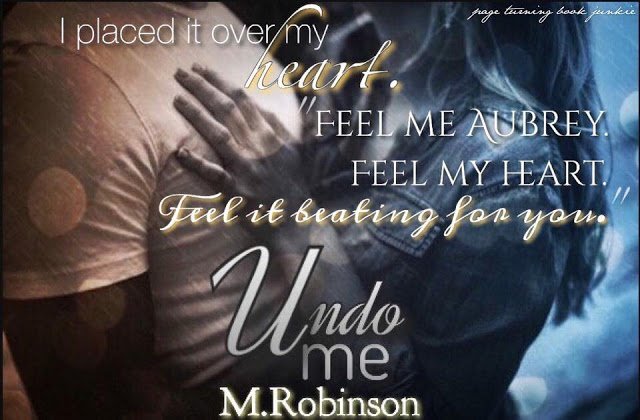 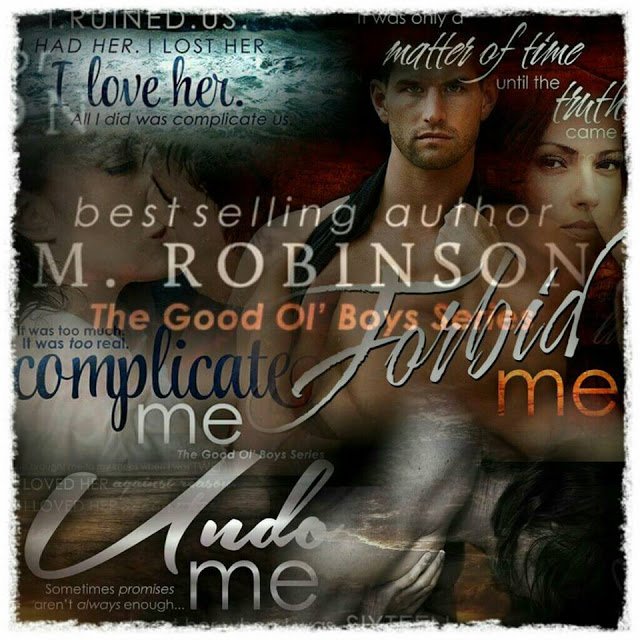 Also Available! The Good Ol’ Boys Book one and
two
(All can be read as standalone books)
FREE WITH KINDLE UNLIMITED! 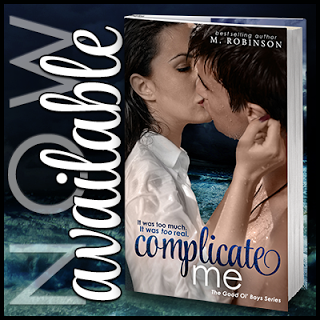 Complicate Me FREE WITH KU
Amazon 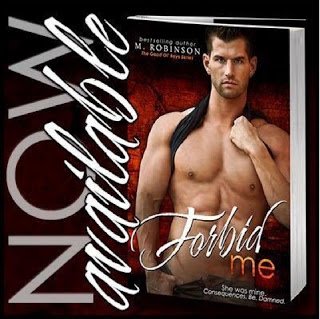 Forbid ME FREE WITH KU
Amazon 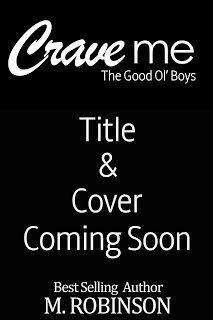 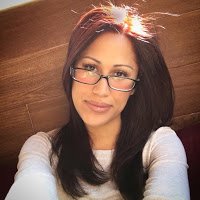 M. Robinson loves to read. She
favors anything that has angst, romance, triangles, cheating, love, and of
course sex! She has been reading since the Babysitters Club and R.L. Stein.
She was born in New Jersey
but was raised in Tampa Fl. She is currently pursuing her Ph.D in psychology,
with two years left.
She is married to an amazing
man who she loves to pieces. They have two German Shepherd mixes and a Tabby
cat. 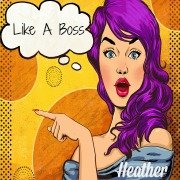