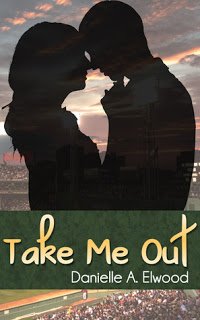 Charlotte grew up in the Boston socialite spotlight.
Bentley grew up on the wrong side of the tracks.
One chance baseball game will change both of their lives forever.
But will their relationship stand the test of ex-lovers, arson, and Charlotte’s parents?

I would give this a strong 3.5 stars. Take me out had 2 very strong independent characters. Charlie who is strong, independent and out spoken ( she is awesome compared to some of the leads I have read lately). Charlie has lead a charmed life. She meets Bentley who is a little rough around the edges tough boy. They have a chance encounter and they start -up from there. I loved the character build-up in the first few chapters. There is great dialog. Bentley’s character does get a little upsetting, but I think he redeems himself well.

I like that there were some moments I did not see coming. The reason it has 3.5 stars is because it did not hold my attention like other books have. That being said it is still a good book and  I would recommend it to any one who likes a sexy bad boy. I good book with great chemistry between characters. And one that will have you rooting for a great ending.

Danielle A. Elwood is a blogger by trade who started writing her first romance novel Take Me Out as a hobby in 2012. She is a avid romance novel lover herself, which inspired her to take the leap into writing her own. She was born and raised in Connecticut and is relocating to Florida in April of 2013 with her family.