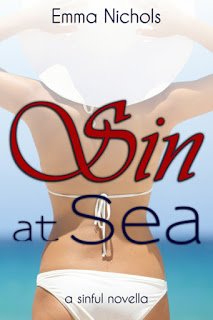 When Alysin decided to surprise her boyfriend at work with dinner, the surprise was on her. Since he was going at it with his secretary on the conference table, she packed a bag and called her BFF. Jolie and Alysin had been traveling the country, working as digital nomads for ten years ever since graduation. Taking this as a sign it was time for a new move, they decided to take a cruise, regroup, and make a plan.

Then she meets Mr. Bedroom Eyes. Following her lead, they pretend to be married so that she can rid herself of the guy who started hitting on her before the boat left the dock. Though it was supposed to be a momentary arrangement, he asks her to take it one step farther. Then another and another. The cruise promises to be memorable in every way that matters.

Along the way, Alysin learns that she won’t have to fake an orgasm if she’s with someone who knows what to do, that not all men suck, but the best ones suck really well, and that sometimes what starts out as something pretend, can fast become something completely real. Will the woman who lives life with no regrets, regret that she made that stupid rule about not exchanging names and contact info?

I was hooked after the first few sentences. Alysin was AWESOME. What a strong female lead character. Not really messed up, but just knows what she wants. Her boyfriend cheats on her. She walk in while he is with his secretary. This scene was amazing, I was in complete awe of Alysin on how she handles what is taking place. So Alysin and her friend decide to take a trip. Alysin meets a guy who they immediately decides they will be a couple for the week, no names just companionship. He is known as Mr. BE (bedroom eyes). They spend the whole week together doing both naughty and romantic things.   When I say naughty I mean the steamy erotic scenes taken place. There is girl on girl, ménage with 2 girls one guy, regular guy with girl and a group scene. The are tastefully done so know graphic porn scenes do, just simple erotica. The scenes are not very drawn out, you get what is happening and that is it. The story does evolve around there. Both Mr. Be and Alysin fall for each other, but the cruise ends and so does their agreement what will happen, well you must read to find out. I really enjoyed this novella, and trust me you will to, great job.

We walked further without speaking, my anticipation building.  Finally, he broke the silence.  “See, I have given both your dilemma and your offer careful consideration.  It’s clear to me that there is really only one solution.”  He smiled broadly at his proclamation.

“Oh, really?”  I asked with an eyebrow raised.  “And just what is my dilemma?”

“Obviously, you need a great protector to fend off unwanted men on this cruise,” he announced, puffing out his chest for effect, further proof that he was the protector I needed.

I smiled because he was so damn cute.  “Oh, but I have Jolie,” I remarked.

“Listen, if this Jolie exists, I have yet to see her.  You keep claiming her, but both times we’ve met, she was nowhere to be found.”  He shrugged and looked about.  “So, I think you should consider my offer.  It’s a pretty great offer.”

“Oh, really.  And just what is that?”  Looking about, I realized that we had stopped in the cruise ship jewelry shop.  Then Mr. Bedroom Eyes dropped to one knee.  I backed up a step.  “What are you doing?”  I asked, confused and concerned.  This could go very badly.  I may have misjudged him completely.

“Relax,” he urged.  “I just have one very important question to ask you.  And these things are better said with jewelry than I ever could with words.”

I started to take a second step back.  I’m a runner.  Only he grabbed my hand and halted my escape.

“Will you be my wife for the week?”  He asked.  Then he batted his eyelashes at me.

It really took all the pressure off.  Throwing my head back, I let out a huge laugh…a combination of relief and pure joy.  “Are you sure you don’t want to date me?  I hear there’s a lot more sex in dating than there is in marriage?”

He stood slowly, contemplating the idea.  “This is true, but since I’ve had no so sex with you thus far, any would be an improvement.  Plus, since you already announced me as your husband, I thought this would keep the charade going.” 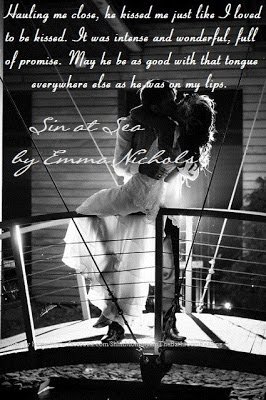 What made her decide to be an erotica author?
Simple.
How else was she going to parlay her two favorite past times into a career?
Emma is single and loving it. Like her first character, Alysin, Sin for short, she doesn’t believe in settling or in settling down. She loves to indulge in her passions whenever the mood strikes and enjoys keeping all of life’s cliche moments spicy.
Known for her sense of humor, Emma surrounds herself with friends whose antics often become the source of book fodder. Her ideal situation would be to explore the Caribbean while writing. She pursues that dream daily.