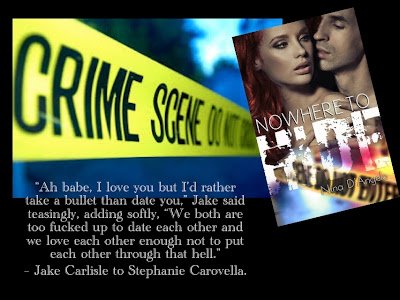 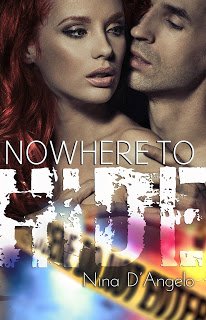 Stephanie Carovella came back
to Los Angeles
to face her past and nearly lost her future to a serial killer.
Now she has a chance to start a new life with a new man.
But is that what she wants? While she battles Jase Devlin, the man who won’t
stop until they are together, she gains the attention of another serial killer.
This time it’s the copycat killer; one who will stop at nothing to possess her.
Can she survive the madness of another killer? Will she give in to Jase
Devlin’s advances? And will she see the real threat before it’s too late?
Or will Stephanie Carovella discover she has Nowhere To Hide?
REVIEW by Monique
SUSPENCEFUL
is Nina D’Angelo’s thriller romance novel, Nowhere
to Hide, is her second novel in the Stephanie Carovella series, and is a heart
bender of a story. The novel is proceeding by Nowhere to Run, which I would recommend reading too. Nowhere to Run captures the same heart
wrenching story of Stephanie Carolvella struggles with a serial killer.
Three months
have now passed and Stephanie now has caught the attention of a new serial
killer. She also finds herself involved with another murder mystery regarding a
girl.  She discovers she has the attention
of a new serial killer and anyone she knows becomes a targeted victim to be
murdered. There is a twist though, the serial killer knows a little too much
personally about Stephanie than he should, and so is there more than one serial
killer after Stephanie? Without giving too much away, you will find the answers
to the question and will be shocked to say the least.
Author Nina
D’Angelo has done an AWESOME job writing a thriller romance that captivates you
immediately by capturing your interest as you find yourself engulf in the
story, so become a real page-turner. Nina has written the novel capturing the
reader to experience the discoveries alongside Stephanie, but Stephanie story
is not over. Nina is working on Damaged,
a prequel to Nowhere to Run.
Author Nina
D’Angelo’s second novel in the Stephanie Carovella series, Nowhere to Hide, receives 5 AMAZING STARS!
EXCERPT
Holly
frantically ran down the muddy track. Feeling her feet slip and slide against
the wet surface, she stumbled, crying out when she fell to her knees. Her heart
beating wildly, she instinctively put her hands out in front of her, dropping
them to the ground to protect her fall.
She bit
back a sob, the slow and steady pace of her attacker’s footsteps drawing
closer. She had to get up. She had to escape. The thought echoed through her
mind, spurring her on. 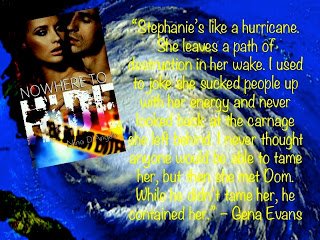 Staggering
to her feet again, she involuntarily placed her hand to her head. A wave of
nausea hit her as she felt sticky blood on her fingers.
Pushing
forward, she forced herself into a steady pace, refusing to let the throbbing
of her head stop her from moving. Tremors ran through her body. Why her? Why
had he attacked her? She’d been walking from the library to the university car
park when he had taken her by surprise, hitting her from behind.
The
force of the blow had left her reeling and she’d dizzily turned around, just in
time to see the tire iron come down again. She’d managed to lift her arm up to
ward off the blow, screaming in pain when his weapon connected with her wrist.
When he’d raised the tire iron to hit her again, she’d lashed out, shoving him
hard with her good arm. He’d stumbled backwards, and she’d used the opportunity
to escape. Sprinting past him, she’d headed for the university car park, her
heart racing frantically.
She
could still hear him behind her. His footsteps sped up from a slow and steady
pace into a fast jog. He was getting closer and closer, she panicked. He was
going to get her.
Why had
she taken the shortcut? When she’d left the library, she’d automatically taken
the quicker route. It was a shortcut she’d taken countless times before during
the day, but never at night – or at least not until tonight. Why had she been
so stupid, she chastised herself. Ducking her head slightly to avoid an
overgrown branch she narrowed her eyes, focusing ahead of her to the university
car park, as it came into view.
Pushing
her body to its limits she burst out into the opening, her breathing coming in
short pants of exhaustion. She headed towards her car, jerking her handbag off
her shoulder. Frantically ripping it open, she searched for her car keys,
ignoring the items spilling onto the concrete. 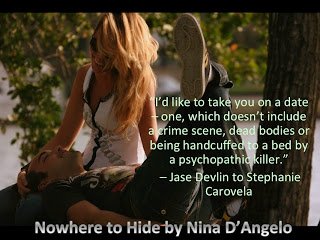 Unable
to resist, she craned her head back toward the shadowed path, relief flooding
through her when she realized no one was behind her. Taking a deep breath of
reassurance when she reached her car, she unsteadily unlocked the door to her
yellow Volkswagen.

Quickly
getting into the car, she locked the door. Fumbling with the car keys, she
whimpered when they fell to the floor. With trembling fingers, she searched the
car floor for her keys, breathing a sigh of relief when she located them.
Sitting
back up straight, she glanced out the window, realizing he was standing in
front of her car, a gun in his hand.
“Dear
God, please no,” she whispered, watching helplessly as he raised the gun and
aimed at her, his eyes lighting up in pleasure at the terror on her face just
before he fired.

Nina D’Angelo is
a freelance writer and photographer. After graduating from Deakin University in
2005, with a Bachelors Degree in Journalism and Public Relations, Nina briefly
worked in P.R. Not satisfied with her profession, she returned to freelance
writing. Since graduation from University, she has written her own TV series,
produced a music show for three seasons, worked for several music magazines and
her photography was published in Aqua Pulse.
Her first novel,
Nowhere to Run was released February
2013. It is the first in the Stephanie Carovella series and currently available
through Amazon. It will soon be available through itunes and Barnes and Noble.


Nina’s second novel, Nowhere to Hide, is
due for release in August 2013. It is the second in the Stephanie Carovella series. Nina has already started working on her
third and fourth novels. Her third novel, not yet titled is due out in December
2013 and the fourth novel, Deadly Secrets – the third in the Stephanie
Carovella series is due out December 2013/January 2014.