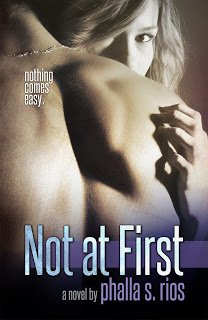 Falling for two men at the
same time was something Angel Mabbott never expected to happen.
Leaving a past full of
pain and loss in California, Angel is determined to make something of her life
when she starts college in Minneapolis.
But life takes a turn when she finds herself torn between Kevin and
Roman.
Kevin Hawken is a
domineering man who forces himself into Angel’s life and changes everything
she thought she knew.  But how much can
he be trusted when he is so secretive about himself?
Angel was instantly
intrigued when she first laid eyes on Roman Conti, an Investment firm
owner.  He was everything she ever
wanted in a man: romantic, loving, and protective over her.
As Angel begins to weave a
bitter web of desire and deceit, will she find herself consumed, or will she
be able to find her way out and follow her heart?

REVIEW by Monique
NOT AT FIRST
begins with Angel Mabbott at the hospital after attempting to burrow her
sorrows by trying to take her life for feeling guilty about her father’s
passing. Not only does she feel guilty about her father’s death, but her mother
and siblings also blame her for his death too. Angel slips in a coma only
visited by her uncle and a mystery man, the men discuss her future in which her
uncle decides to send her to Minneapolis when she recovers. The mystery man
promises to take care of her and will even relocate to place he despises,
Minneapolis.
Two years
later, Angel leaves to start a new beginning to attend the University of
Minneapolis, leaving her past behind her. She decides to move in a townhouse with
her best friend, Lola Sanchez, along with two other roommates, Zoe and Aubrey.
Angel decides her room needs painting and cleaning, so she and Lola go to a
hardware store to buy some much-needed supplies when she meets Kevin Hawken. Kevin
has blazing hazel eyes, muscular physique, short light brown hair, a jawline
stubble, crooked grin and sleeve tattoos on both arms. 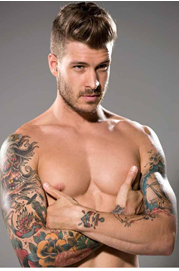 Angel leaves
the hardware store and thinking she will never see him again, but when she
finds him in her science lab class few days later she is shocked.  Kevin becomes her true friend because she
cannot hide her true feelings when she is with him even though he sometime he
acts likes an ass. She feels safe with him and comfortable so much she is
unable to explain, but make him promise they will always be friends.
One day when
Angel was waiting at a bus stop on her way home, she meets Roman Conti, CEO of
Conti Investments. Roman is handsome businessman, with dark eyes, a sexy smile,
and simply irresistible to stay away from. Roman is determined to have her, so
her charms himself into her life by romancing her with affection and surprises. 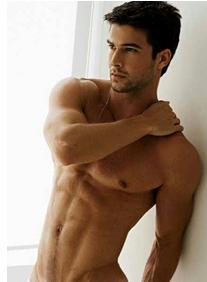 Angel finds herself trap in a love triangle
and does not want to hurt anyone, but needs to decide which man is best for
her. Kevin and Roman have many mysteries that you will uncover along with Angel
and just  when you think you know
everything, the story takes a twist leaving you again doubting who he better
for Angel and does Angel ever find who her mystery man is?
Author
Phalla S. Rios debuts her first romance, NOT AT FIRST, and has done a BEAUTIFUL
job writing a romance that captivates you immediately capturing your interest to
turn each page to discover more answers alongside Angel. Even though you may
uncover more questions than answers and leaving you doubting if Angel’s choice
was the right choice, so do not be disappointed when you discover the book ends
with huge cliffhanger. Phalla will not have us to waiting too long to find out
what happens with Angel, Kevin, and Roman, because she is currently writing the
second book in the series, ALWAYS AT FIRST.
This is her
first novel in the series, Phalla I give NOT AT FIRST, 5 AMAZING STARS!
Excerpt 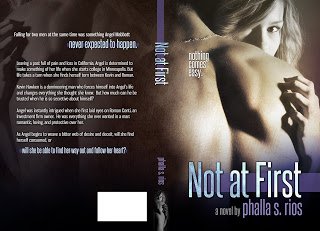 “I want you to kiss. Me. Now…before I go home
with you.” I whisper.
Kevin pulls my head closer to his
and runs his tongue along my lips, side to side. I lick my lips after he is
done, wanting to taste him, on my mouth. He smiles that crooked grin of his
watching me become desperate for him.
He then captures my bottom lip
with his teeth pulling slightly. I stick out my tongue and slide it across his
top lip. Kevin grunts and let go of my lip.
“You play dirty.” He tells me
before his lips devour my mouth.
His kisses me hotly and rough,
our lips wet sliding off of each other. His tongue dances around in my mouth,
wanting so much more than just a kiss. My body responds by moving to straddle
him and grinding against his jeans wanting more of him. I pull his head closer
to me. I whimper when we can’t seem to get close enough.
Kevin starts to rub between my
legs through my tights, sending me into a frenzy of lust.
“I want to touch you there.” He
says breaking our kiss just for a second.
I nod when his lips are back on
mine. Kevin doesn’t hesitate. His hands are in my tights instantly.

Phalla S. Rios lives in California with her husband and two goofy pit bulls. She loves to read and write drinking her favorite tea, Joy, from Starbucks. During her spare time she is usually at the movies or looking for the next best place to eat. She often refers to herself as a foodie. Right now she is finishing up her debut novel, Not at first.
Like on Facebook here