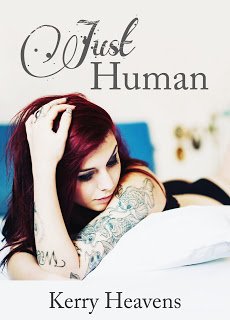 Meet Liv and Danny…
Liv loves Danny. She knows she loves him more than he loves her, so she lets him go without a fight when his parents make him move back to America. She knows she will never love anyone like she loved him, but she has to move on.
Danny loves Liv. He knows he loves her more than she loves him, because she does nothing to get him to stay, so he goes quietly when his parents leave the UK. He knows he will never love anyone like he loved her, but he has to move on.
Twelve years on, they have made a good job of pretending, they may have almost forgotten. But when they get in touch via Facebook, it seems that it is all still there.
They quickly find that they are intensely compatible in ways they hadn’t even begun to explore before they were forced apart.
Can they put aside their fears and give it a go? Or will deep rooted doubts and insecurities tear them apart?
REVIEW by Monique
Kerry
Heavens has a love of the arts, which is express in her creativity in her
writing. She once thought her path of creativity was leading her to Fashion,
but found a different skill path as an author. Kerry describes her-self by
starting with a quote from a Gloria Gaynor’s song, I AM WHAT I AM, probably for many reasons. The silver lining of the
lyrics tells us to live life for what we are and not what others want us to be,
so Kerry did just that writing, JUST HUMAN.
JUST HUMAN
is the perfect title for Kerry Heavens’ new romance novel, because it depicts what
she believes in and how others should accept us as whom we are as individuals. Let’s
take a snippet from the song, I AM WHAT I
AM, to fully understand the meaning of the song.
“I am what I am
And what I am needs no excuses
I deal my own deck
Sometimes the aces sometimes the
deuces
It’s one life and there’s no return
and no deposit
One life so it’s time to open up your
closet
Life’s not worth a dam till you can
shout out
I am what I am” – Gloria Gaynor
The quote summaries the love story
between, Olivia “ Liv” Constance Harper and Danny Morgan. Liv and Danny were
best friends growing up together in England, until Danny has to move back to
the states with his parents. The two become devastated because not only had
they become best of friends, but love was seeding in their relationship.
Twelve years later, Danny contacts
Liv through Facebook and turns both of their lives upside down. She discovers
that she never stops loving Danny, but she is afraid to open heart again. Danny
also discovers the same fate, because he believes Liv is his only true love.
Danny takes no chances and does not hold back to tell Liv he loves her, so much
he moves his life around to find out how she feels about him.
“Listen, here is what I know. Nothing
went wrong between us, just circumstances tore us apart. If I hadn’t left, who
knows, we might still together. I’ve tried very hard since then, to not hold
everything up against what we had, but it’s impossible. There has been
something missing in my life ever since that day and last week, for the first
time in twelve years, something changed. The missing piece came into view and I
had to come see if I could out myself back together.” – Danny
Will they be able to withstand the
distance between them?  Will Danny also have
the courage to fight for Liz and show her how much he loves her?
“I don’t want you to cry, but I want
you to know that I’ve never stopped loving you…and never will.” – Danny
Will Liv
allow herself to love Danny again?  Will Liz
let her guard down around her heart and tell Danny how she truly feels before
it is to late? Or will Liz break Danny’s fragile heart and send him through
turmoil of heartache?

‘You
are always rooted here with me’ inked
beneath it. – Liz
Kerry has
done a wonderful job with JUST HUMAN, a novel for true romantics. The novel also
depicts both sides of Liz and Danny’s story, but be pre-pared for cliff hanger.
No worries though, Kerry  has already
started writing the sequel to JUST HUMAN called, STILL HUMAN, and she even
gives us a sneak peak too.
JUST HUMAN
is a WONDERFUL romantic story, so I give JUST HUMAN 4 TATTOOED STARS!
Amazon US
Amazon UK
Amazon CA 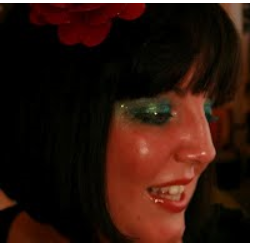 Ok, fancier of almost all men

How I got here.
I never said I wanted to be a writer. I said I
wanted to write a book, as like a bucket list kind of thing. But that did not
mean I envisaged a life as a writer, or even what it would take to try and be
one.
English language was not my favourite subject
at school. Paying attention wasn’t really my favourite subject at school. I
just phoned it in. I am not trained and I am not qualified, but I LOVE to read
and I get so sucked in to the stories. I realise now that I am actively
writing, all the time that I was already spending making up little stories in
my head.
I first decided to really give it a go after a
family loss. Frankly I had no idea what to do or where to start, but it was
eating me up by then and the reminder of just how short life is pushed me. I
had a couple of weeks of ‘right, I’m going to do this.’ but they were just
false starts. Then one morning I was dropping the kids at school and Breakeven
by The Script was on the radio. I have always loved that song and one line in
particular always stood out.
The song is about a girl who cheated and broke
the guys heart, but this one line, ‘What am I supposed to do when the best part
of me was always you.’ has always got me thinking. It is a powerful lyric, one
that I can really identify with. Not because I have lost the love of my life,
but because it is just phrased so perfectly, you can’t fail to empathise with
the feeling.
That particular morning, I was in one of my,
‘right, come on, think of something’ places and I heard that as I was parking
the car. I started thinking, how would it feel if you lost the one person that
made you whole and you had to just live with it? How awful would it feel,
knowing that the magic you had together was the thing that completed your life
and without it you are empty.
On my way back to the car I began to wonder if
it would make it better or worse if the other person, the one who left was
feeling the exact same way. How terrible would it be to live a life half lived,
never feeling for the rest of your days, that feeling you felt when you were
together? What if it was all for nothing, a misunderstanding, something that
could have been avoided?
I didn’t have the whole idea, but for the first
time ever, I had a starting point. So I raced home and switched on the
computer. I just started writing…I wrote solidly, every day, min 1000 words a
day from the beginning of July until the end of September. Then I realised I
had a first draft!
I edited the living daylights out of it, by
myself for a few months and in January, started looking more seriously into
self-publishing. I heard that being on Twitter was essential to making it work,
which I didn’t believe, but I gave it a go.
Since February, I have spent almost all my time
on Twitter, well in between finishing the sequel to Just Human. I have made
some friends for life. I have the most brilliant bunch of beta readers who are
now like sisters. I have met so many bloggers who are amazing and tirelessly
promote books and authors for nothing but love. I put in a lot of time to build
a network so that I could launch Just Human with support.
I hired myself an editor, because I have read
so many potentially great indie books, that were let down by poor or no
editing. I feel like it was worth the money.
I don’t know yet if it is going to be a
success. I think it has had a good start, but only time will tell. I am putting
out the sequel anyway. Then at least I can say I saw it through.
One thing is for sure, for someone who is not a
writer and never really had much interest in being one, I sure am happy with my
life now. I am working on something new now and it feels huge. Like something
people will like. I hope I get to show it to you all.
If anyone out there wants to do it, I say,
write whatever you can think of, write every day. Pay an editor AND GET ON
TWITTER!
Thanks for listening.
Kerry x
Website: http://www.kerryheavens.com
Email: [email protected]
Like on Facebook here
Follow on Twitter: here
Goodreads Page