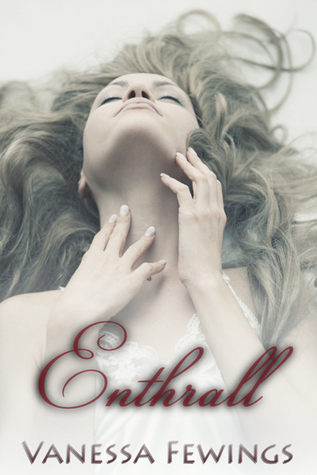 Add to your shelf!
Blurb:
This is the world of the forbidden. This is the embrace of Enthrall.Mia Lauren is a single, twenty-one-year old working in a West Hollywood art store who dreams of one day becoming a fashion designer. When an unexpected offer arises to work at Enthrall, L.A.’s premier fetish club for the wealthy, Mia accepts. It’s a salary beyond her wildest imagination.Mia becomes the secretary to the club’s assistant director, blond and broody Richard Booth. Richard is not only one of L.A.’s most beautiful and wealthiest men, he is also the club’s senior dominant. Mia is both drawn and terrified when he reveals flashes of his white-hot passion, threatening an unbound pleasure like no other. She knows her attraction may be her undoing, but the spellbinding feelings render her powerless to resist his advances. What Mia cannot know is that Enthrall’s dashing director thirty-year-old Cameron Cole, who is also the club’s psychiatrist, has lured Mia to save his best friend and patient Richard from his obsession with thrill seeking. Cameron masterfully sets up sexy scenarios to ensure the collision of Richard and Mia, hoping that love will save him. However, despite Cameron’s noble intentions, he also finds himself enticed by Mia’s haunting innocence. Passion and pleasure stir, forming a dangerous love triangle. This is the world of the forbidden. This is the embrace of Enthrall.
EXCERPT
Richard blinked through
dark blond lashes. “You realize what it is I want to do to
you?”
“Yes.”
With the window closed,
this room lacked the air we both needed so desperately. From the way his chest
rose and fell he too must have felt short of breath.
He raised his chin in
defiance. “Say it.”
“You want to dominate
me.”
“Subjugate you.” He
stepped closer. “Control you. Conquer you.” His left hand rested against my
chest and he eased me back against the wall again and pressed hard. “Fuck
you.”
Oh please.

He looked hesitant.
“Mia, I have never taken on an untrained submissive.”
“What does that
mean?”
“They’ve always come to
me primed.”
“Primed?”
“Already trained.”
“By who?” I sucked in my
breath. “Cameron?”
Richard stepped closer
and brushed a stray hair out of my eyes.
“I want it to be you,” I
said softly.
“You deserve someone
better than me.”
“Don’t I get a say?”
“Right up until the
moment you agree to become my submissive. Then all choice is lost.” He narrowed
his gaze. “You wouldn’t want that. Would you?”
My legs felt weak. I
breathed a sigh of sadness when his hand fell once more to his side, threatening
never to touch me again.
“You and I are miles
apart,” he said.
“Are you trying to
convince yourself? Or me?”
“What is our common
ground?”
“You don’t think I’m
good enough for you?” My voice broke with emotion. “Is that
it?”
“Other way round.” He
looked intently. “You are innocence incarnate.”
I broke his gaze, my
heart aching with the thought I’d failed him, failed me.
My inner musing told me
to stay strong, tell him want I really wanted, needed. Him, it had only ever
been him.
My words flowed from an
unfamiliar place. “I’m returning to the balcony. If you find the strength to
face what we both know, that there’s real chemistry between us, join me. Ask me
out on a date. I may even say yes.” I picked up his glass of wine and strolled
off with it, leaving him standing there. I headed across the living room and out
onto the balcony.
Facing the breeze, I let
it wash over me, inhaling the freshest air. This place offered a new start. The
promise of fulfillment close enough to touch…
If I dared to reach out
to it.
After several minutes of
savoring the view, I regretted my outburst, letting him know my true feelings. I
downed the rest of the wine, taking pleasure from knowing his lips had brushed
where mine were now on the glass. The softest sigh escaped
me.
I turned around—
Richard leaned against
the balcony doorjamb. “Start slow?” His alluring blue gaze burning fiercely into
mine.
“Slow.”
“Are you sure this is
something you want?” he whispered. “I’m not good at compromise.”
“I
know.”
“What do you have in
mind?” he said.
“Chrysalis’s party
tomorrow night. Let me go with you.”
He twisted his mouth as
though mulling over it.
“Pick me up tomorrow at
six,” I said.
Richard stepped onto the
balcony. “You do realize I’m the dominant.” He towered over me, emphasizing his
point. “An issue you would be wise not to forget.”
Damn, that turned me
on.
I stretched out my arms
to either side and clutched the handrail. “Your irises dilate when I push back.”

Don’t push back. Cameron
warned he prefers malleable.
Could I be this woman?
Could I fall at Richard’s feet and become his sex slave? What was I willing to
give up in order to become his lover? His submissive.
Everything.

I’d do
anything.
He shifted closer. “What
else do you see?”
“That you want this as
much as I do.”
“Some things are
inevitable.”  His expression softened, his face now serene. “I have so much to
show you.”
“I want
that.”
“Mia.” He narrowed his
gaze, his intensity returning. “Are you truly ready for such blinding
pleasure?”
A flurry of what felt
like butterflies burst out of my chest. Tingles of excitement caused me to
shiver, and an exquisite ache in my belly settled low. In the deepest depths of
my soul I felt ready for this, for him.
“It’s a good thing we’re
not alone,” he said.
“Not that it matters,” I
said. “I only ever see you.”
Richard’s frown
dissolved and he ran his fingers through his golden locks.
“I’ll see you tomorrow
then,” I whispered breathlessly, melting in the wake of his stunning smile.